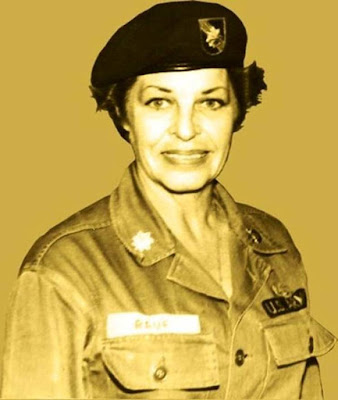 I received this email from a friend last night and unfortunately passed it on without confirming its accuracy. That turns out to be a mistake on my part.


Some of you remember Martha Raye very well. A comedian and singer, she, like Joe E. Louis had a large mouth and appeared with Bob Hope, and on other radio programs and usually played supportive roles in comedy films and musicals. She was also loved for the work she did entertaining troops in WWII and Korea.Some things you probably did not know about Martha Raye.Most of the old time entertainers were made out of a lot sterner stuff than today's crop of activists and whiners.It was just before Thanksgiving '67 and we were ferrying dead and wounded from a large GRF west of Pleiku, Vietnam. We had run out of body bags by noon, so the Hook (CH-47 CHINOOK) was pretty rough in the back.All of a sudden, we heard a 'take-charge' woman's voice in the rear. There was the singer and actress, Martha Raye with a SF (Special Forces) beret and jungle fatigues, with subdued markings, helping the wounded into the Chinook, and carrying the dead aboard. 'Maggie' had been visiting her SF "heroes" out "west."We took off, short of fuel, and headed to the USAF hospital pad at Pleiku. As we all started unloading, our Captain said to Martha.... "Ms Ray, with all these dead and wounded to process, there would not be time for your show!"To all of our surprise, she pulled on her right collar and said ,"Captain, see this eagle? I am a full 'Bird' Colonel in the US Army Reserve, and on this is a 'Caduses' which means I am a Nurse, with a surgical specialty.....now, take me to your wounded".He said, yes ma'am.... Follow me.Several times at the Army Field Hospital in Pleiku, she would 'cover' a surgical shift, giving a nurse a well-deserved break.Martha is the only woman buried in the SF (Special Forces) cemetery at Ft. Bragg.So many have done so much that we hear so little about -- thanks a lot to these people who stand up to be counted.

I received this email from K this morning. K was a longtime medical officer in the Navy and Reserves:

Robert—
Surprised you sent this out as it wreaks of details ripe for a Snopes debunking, starting with her headstone clearly showing she was a civilian. However, apparently she was granted “honorary” ranks in the Marine Corps and Army, ostensibly through the (justifiable) help of the USO, though she was only a Lt. Colonel in the Army, not a “full Bird” as this story claims. This alone makes me think she never uttered any of these dramatic, Internet-sensationalist words.
Doesn’t mean she wasn’t a great person, though...
K

Boy did I have egg on my face. I did some checking and found this site; Investigating Claims That Martha Raye Was a Nurse in Vietnam. Turns out that the Raye story was, as my friend suggests, pretty much bullshit.


In her biography of Raye, Take it from the Big Mouth: The Life of Martha Raye, author Jean Pitrone writes that while Raye routinely told people she had worked as a nurse's aide at Cedars of Lebanon (now Cedars-Sinai) Hospital in her youth and "boasted of being a registered nurse" as an adult, in reality, she was neither a registered nor a practical nurse.

Snopes article on the subject is a little more charitable, including an a.p. report from 1966 that does mention her aiding the troops in a medical fashion for two days in a Soc Trang dispensary. In any case, you have to be more diligent than I was at forwarding stuff you have not personally authenticated.