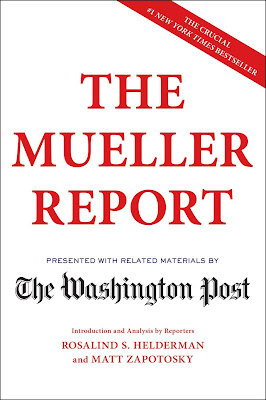 We were at a friend's house the other night and I noticed the Mueller Report sitting on the table. I picked it up and started reading it, honestly for the first time.

We can end around the argument about collusion, no collusion, obstruction, etc., I think it serves little purpose at this point. Leave that to the lawyers and politicians.

What did shock me, and know that I am not even twenty percent through the lengthy book, is just how deeply the IRA, the Russian Internet Research Agency, was penetrating and impacting our social media platforms.

Regardless of your political stripe and inclination, all Americans should be completely outraged by the sordid conduct illustrated in this investigation.

I encourage all of you to actually read the report, especially before you make up your mind regarding the question of Russian intervention in our elections.


The first form of Russian election influence came principally from the Internet Research Agency, LLC (IRA), a Russian organization funded by Yevgeniy Viktorovich Prigozhin and companies he controlled, including Concord Management and Consulting LLC and Concord Catering (collectively "Concord"). The IRA conducted social media operations targeted at large U.S. audiences with the goal of sowing discord in the U.S. political system.  These operations constituted "active measures", a term that typically refers to operations conducted by Russian security services aimed at influencing the course of international affairs.


The IRA and its employees began operations targeting the United States as early as 2014. Using fictitious U.S. personas, IRA employees operated social media accounts and group pages designed to attract U.S. audiences. These groups and accounts, which addressed divisive U.S. political and social issues, falsely claimed to be controlled by U.S. activists. Over time, these social media accounts became a means to reach large U.S. audiences. IRA employees travelled to the United States in mid-2014 on an intelligence-gathering mission to obtain information and  photographs for use in their social media posts. By the end of the 2016 U.S. election, the IRA had the ability to reach millions of U.S . persons through their social media accounts . Multiple IRA-controlled Facebook groups and Instagram accounts had hundreds of thousands of U.S. participants. IRA-controlled Twitter  accounts separately had tens of thousands of followers, including multiple U.S. political figures  who retweeted IRA-created content. In November 2017, a Facebook representative testified thatFacebook had identified 470 IRA-controlled Facebook accounts that collectively made 80,000 posts between January 2015 and August 2017. Facebook estimated the IRA reached as many as 126 million persons through its Face book accounts. In January 2018, Twitter announced that it had identified 3,814 IRA-controlled Twitter accounts and notified approximately 1.4 million  people Twitter believed may have been in contact with an iRA-controlled account.

You start reading the report and it is just flabbergasting how effective they were.

Dozens of IRA employees were responsible for operating accounts and personas on
different U.S. social media platforms. The IRA referred to employees assigned to operate the social media accounts as "specialists." Starting as early as 2014, the IRA's U.S. operations included social media specialists focusing on Facebook , YouTube, and Twitter. The IRA later added specialists who operated on Tumblr and Instagram accounts. 44 Initially , the IRA created social media accounts that pretended to be the personal accounts of U.S. persons. By early 2015, the IRA began to create larger social media groups or public social media pages that claimed (falsely) to be affiliated with U.S. political and grassroots organizations. In certain cases, the IRA created accounts that mimicked real U.S. organizations. For example, one IRA-controlled Twitter account, @TEN_ GOP, purported to be connected to the Tennessee Republican Party. More commonly , the IRA created accounts in the names of fictitious U.S. organizations and grassroots groups and used these accounts to pose as anti immigration groups, Tea Party activists, Black Lives Matter protestors, and other U.S. social and political activists.

A lot of people call themselves patriots in this country and then put their heads in the sand when confronted by events like this, essentially the large scale subversion of our communication systems by a hostile foreign entity. I would think the actual patriotic thing to do at this point would be to educate yourself and hope that our legislators will act so it never happens again.

IRA groups active in the campaign covered a range of issues and included purported conservative groups (with names such as "Being Patriotic ," "Stop All Immigrants," "Secured Borders," and "Tea Party News") , purported Black social justice groups ("Black Matters ," "Blacktivist," and Don't Shoot Us"), LGBTQ groups ("LGBT United"), and religious groups ("United Muslims of America"). Throughout 2016, IRA accounts published an increasing number of materials supporting the Trump Campaign and opposing the Clinton Campaign. For example, on May 31, 2016 , the operational account "Matt Skiber" began to privately message dozens of pro-Trump Facebook groups asking them to help plan a "pro-Trump rally near Trump Tower."

In reading the Mueller report it did seem like Trump, wittingly or unwittingly, had the Russian ops people on a yoyo. If he had bad news, like the pussy grabbing video, almost immediately the Russians or their proxies at Wikileaks would release something damaging to Hillary Clinton. They really had their horse in the race.

In preparation for the 2016 Convention, foreign policy advisors to the Trump Campaign,
working with the Republican National Committee, reviewed the 2012 Convention's foreign policy
platform to identify divergence between the earlier platform and candidate Trump's positions. 788
The Campaign team discussed toning down language from the 2012 platform that identified Russia
as the country 's number one threat, given the candidate's belief that there needed to be better U.S.
relations with Russia.

And he seems to have paid them back in spades.

IRA-purchased advertisements referencing candidate Trump largely supported his
campaign. The first known IRA advertisement explicitly endorsing the Trump Campaign was
purchased on April 19, 2016. The IRA bought an advertisement for its Instagram account "Tea
Party News" asking U.S. persons to help them "make a patriotic team of young Trump supporters "
by uploading photos with the hashtag "#KIDS4TRUMP."  In subsequent months, the IRA
purchased dozens of advertisements supporting the Trump Campaign , predominantly through the
Facebook groups "Being Patriotic," "Stop All Invaders," and "Secured Borders."

The right wing media was entirely penetrated by the IRA and played like a fiddle.

...while posing as a grassroots group called "Black Matters US." In February 2017, the persona
"Black Fist" (purporting to want to teach African-Americans to protect themselves when contacted
by law enforcement) hired a self-defense instructor in New York to offer classes sponsored by
Black Fist. The IRA also recruited moderators of conservative social media groups to promote
IRA-generated content, as well as recruited individuals to perform political acts (such as walking
around New York City dressed up as Santa Claus with a Trump mask).

I look forward to reading the entire report and compliment those who have already done so. I would like to think that the scale and enormity of Russian intervention will provoke outrage but really have no sincere hope that it will actually do so. We are too stupid, too complacent, too lazy, too easily manipulated to seriously do anything about the gross intrusion by the Russians, look at the failure of Senator McConnell to do anything to counter it to this day. No, unfortunately, it will probably only get worse. China is manipulating Hong Kong coverage on Facebook as we speak. We in this country don't seem to ever learn.

We are led (like a rented mule) to believe that a country, that cannot produce any appliances or vehicles of any quality,
have infiltrated our (open) election system and controlled the minds of 240 million voters (although H R Clinton ended
up with more votes than their supposed darling). It would seem from the results their mission had as much success as
the John Birch Society ever had.

I'll be convinced of their Svengalli sway over the masses when a period Soviet tractor brings astonishing returns when
crossing the stage at a Barrett Jackson Auction.