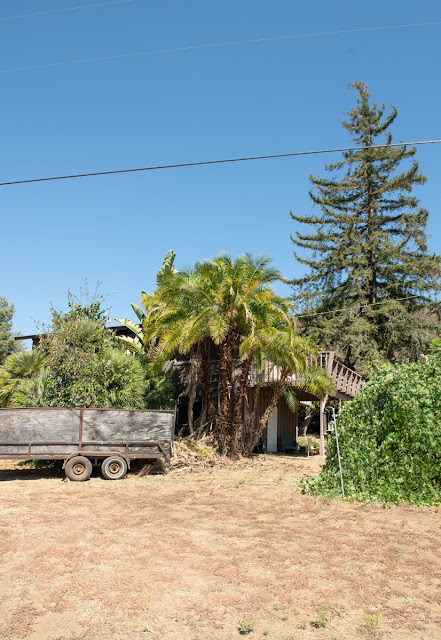 About twenty eight years ago I bought a 15 gallon palm from Rancho Soledad Nursery in Rancho Santa Fe. They told me that it was a phoenix hybrid, canariensis x reclinata.

In layman's terms that is a cross between the rather common Canary Island Palm and the multi trunked Senegalese Date Palm.

The palm grew and grew but it was actually very ugly. It was a mountain of fronds and suckers, we called it Cousin It. Big amorphous blob.

Leslie and I cut off a lot of bottom sucker growth. It had the worst qualities of both parents, a botanic disaster. The spikes were long and lethal.

We never took the beard off the palm and it became a dense thicket. Orioles played in its protective skirting. Left it well enough alone.

Our neighbor Todd has been helping me around the house lately. Great guy and an arborist. I asked him if he could trim it up for me. 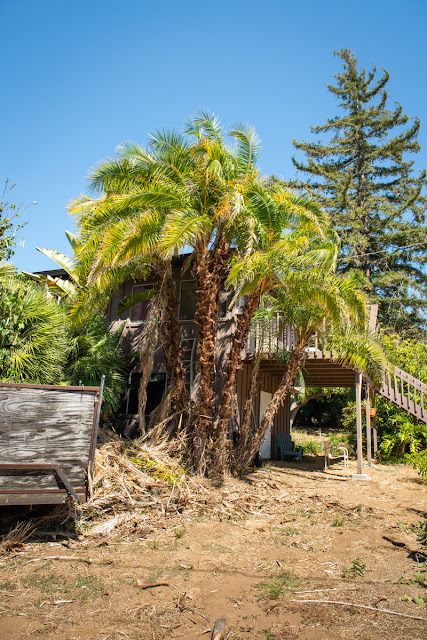 He wasted no time attacking the job. Has taken several trailer loads of fronds out.

And lo and behold, my ugly duckling is now a beautiful swan with nine trunks, topping out near twenty four feet in the air. Who knew?

In a day or two it will be finished up. I need to fertilize it, green it up but will wait until it is a little cooler.

I sent a picture to a palm expert friend who thinks it is more probably a reclinata x roebelenii cross. He mentions a lack of side shoots on the trunks and some identifying frond characteristics.

Rancho Soledad now thinks it is a straight reclinata. I sure don't. I will have to look around for a before picture. The difference is startling.
Posted by Blue Heron at 5:20 PM