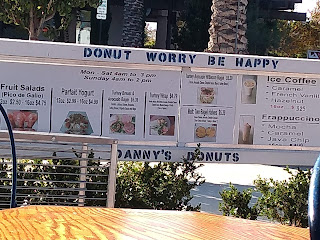 Once upon a time the New York Times said that Danny's Donuts in Vista had the sixth best doughnut in the United States, its blueberry. That was in 2013. Unfortunately, its founder, Danny, never lived to see the review.

Amazingly, it has taken me six years to check the place out. Mostly because they have screwed up the roads in Vista so bad, it is hard to navigate. Danny's is off Eucalyptus, near the old Pepper Tree Frostee.

I showed up on a Sunday two weeks ago and they were all out of the vaunted blueberry, all out of pretty much everything. The girl said that they had sold out three trays of the Times' favorite doughnut. I bought a couple pistachio instead.

They were very green, very cakey and very good, with a slight almond flavor.

Leslie and I went back on Sunday. They still had everything. The very nice girl helping us pointed us to her favorite, the custard filled cream puff, finished with powdered sugar. It was heavenly. We then tore apart another favorite, the apple betty, which is simply beyond words, it is so good. Bought some blueberry and pistachio too. Leslie, a chocophile, had to have a chocolate cruller. The lady misheard her, she got a chocolate cake instead. Next time.

Blueberry is good but the apple betty is the bomb. Their best selling doughnut, New York Times be damned. We are definitely going back to do a more thorough review in the near future. If you like to indulge in the gluttonous sin of doughnuts, Danny's is certainly worth the trip.