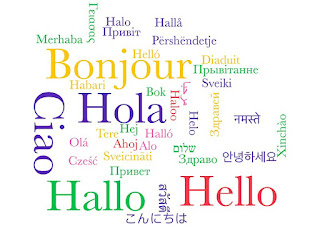 I come from a linguistic family. My paternal grandfather spoke at least eight languages fluently. My father was fluent in Hebrew, Yiddish and English, with a rudimentary skill in German.

My mother is a mystery to me but I do know that she taught French for a while and had a basic grasp of Spanish.

I am a decent Spanish speaker, not perfect but functionally conversant. Give me a week in Spain and I am thinking and dreaming in Spanish. I also took French and German in school, didn't stick, my second language in college was sign language and I was very good at it back then.

So it hurt a little bit when the native Cuban born Spanish speaker ridiculed something I said in Spanish at Glendale last week. Most Spanish speakers are very tolerant of those who try to converse and I guess I murdered a sentence. Oh well. With a little work and study I think I could tune it up quite nicely.

The name for a person who speaks multiple languages is a polyglot. There was an excellent article in the New Yorker last year about the phenomenon that I encourage you to read, The Mystery of People who Speak Dozens of Languages.

Lately I have been following a couple polyglots on YouTube. There are quite a few of them. The first guy I watched was Xiamon and his pal, anglos who converse very well in Mandarin, Cantonese and the Fuzhounese dialect.

Then I found Laoshu. Laoshu is a black guy who has a rudimentary knowledge of so many languages that it is beyond count. I have watched him speak Japanese, Vietnamese, Cambodian, Cantonese, Mandarin, Szechuan, Macedonian, Polish amongst other languages. He is self taught.

I have to tell you that these people make me jealous. Because I think that I have the linguistic ability to do it myself, if only I had the opportunity and discipline. I have the ear and the memory. Would have been fun to be immersed at the Naval Post Graduate School in Monterey and take a six week foreign language intensive. I honestly think that I could do it.

A Liberian man, Ziaf Fazah, claims to be fluent in 59 languages although some question his actual facility. Sir John Bowring, Governor of Hong Kong from 1854 to 1859, was said to understand over 200 languages, and was reportedly capable of speaking 100. Cardinal Giuseppe Caspar Mezzofanti, born in 1774, spoke 38 languages and 40 dialects. The 10th-century Muslim polymath Al-Farabi was reputed to know 70 languages. The German Hans Conon von der Gabelentz, born in 1807, researched and published grammars of 80 languages.