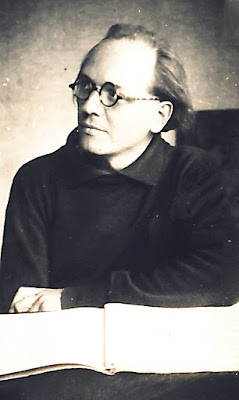 I will be the first to admit that my knowledge of classical music is minimal at best. Which means that I still have the capacity to be captivated by something extraordinary.

We were listening to Stravinsky at Kip's yesterday when Blackburn asked the two of us if we were acquainted with the great French composer Messiaen? I had heard his name but was not really too familiar with his compositions.

Olivier Messiaen was a composer, organist and ornithologist. He was influenced by birdcalls, by gamelan, by Japanese music, Shakespeare, Greek and Hindu, amongst other things. He literally saw music as colors, a rare phenomenon known as synesthesia. 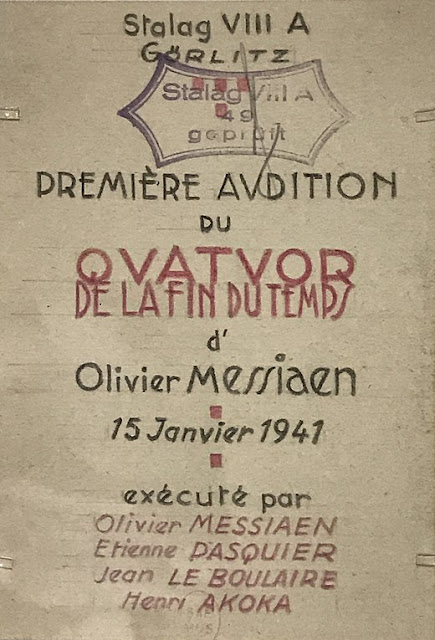 During the fall of France in 1940 he became a p.o.w. and composed the piece I heard yesterday while he was held captive in a German prisoner of war camp, the Quartet for the end of time. An amazing and revelatory work, especially when looked upon in context. This was a quartet for cello, piano, clarinet (in b-flat) and violin. He managed to secure instruments from his captors, no small feat, and performed the work with fellow prisoners for an audience of inmates and prison guards.


From Wiki: Messiaen was 31 years old when France entered World War II. He was captured by the German army in June 1940 and imprisoned in Stalag VIII-A, a prisoner-of-war camp in Görlitz, Germany (now Zgorzelec, Poland). While in transit to the camp, Messiaen showed the clarinetist Henri Akoka, also a prisoner, the sketches for what would become Abîme des oiseaux. Two other professional musicians, violinist Jean le Boulaire [fr] and cellist Étienne Pasquier, were among his fellow prisoners, and after he managed to obtain some paper and a small pencil from a sympathetic guard (Carl-Albert Brüll, 1902–1989), Messiaen wrote a short trio for them; this piece developed into the Quatuor for the same trio with himself at the piano. The combination of instruments was unusual at the time, but not without precedent: Walter Rabl had composed for it in 1896, as had Paul Hindemith in 1938.
The quartet was premiered at the camp, outdoors and in the rain, on 15 January 1941. The musicians had decrepit instruments and an audience of about 400 fellow prisoners and guards. The cello was bought with donations from camp members. Messiaen later recalled: "Never was I listened to with such rapt attention and comprehension."
Brüll provided paper and isolation for composing, and he also helped acquire the three other instruments. By forging papers with a stamp made from a potato, Brüll even helped the performers to be liberated shortly after the performance. After the war, Brüll made a special trip to visit Messiaen, but was sent away and told the composer would not see him.

It's really a unique piece of 20th century art; all the more so given its circumstances. In particular the piano clusters are very distinctive and "Messaienic".

Thank you so much for turning us on to it. I read that he was one of the leading serial composers and pioneered the "serial palindrome." A lot of that type of music is fatiguing, this stays musical.