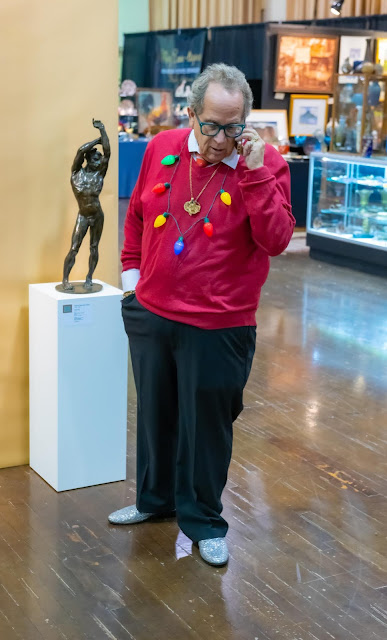 Finished a two day antique show at the Glendale Civic last night, one of my favorite venues. The Los Angeles Show is a fledgling affair and I think that it was very well received.

I believe that it is the only current general line antique show in the entire Los Angeles area. The show featured forty three exhibitors and they represent the best show dealers still left on the west coast.

Obviously the production needs to gently massaged and slightly altered, takes a while to get the word and the kinks out. Rome, and antique shows, are not built in a day.

It was well attended and it is apparent that the Los Angeles collector
was hungry to scour the premises for treasures and swag.

I think most of of did reasonably well and were fairly pleased with the nascent effort. I did okay, covered expenses and a little more but was aware going in that it is going to take a while to establish a beachhead and audience for my work.

I did meet some wonderful people and real characters! Now I need to go unload the van and try to find time to chill this afternoon.

Glad to hear it was positive for you!

Glad the sales are coming your way. Love the observatory shot, reminds me of some of the graphics on early sci fi pulp magazines.

Happy to hear it

Sorry to only comment on what I found to be a typo? "I think most of of did reasonably well and..."

Must be my part of web content management and part minutia. Beside that, I still enjoy reading your posts. Would love to see more photography.