Every time I open up politically there are a rash of comments declaring whataboutism and equivalence. I'm a liberal poo poo head, if Repubs are bad, Dems are worse, we hated Obama too, both parties suck, etc..

Now I personally don't think that the Democrats are as bad as the Republicans, in fact this administration's tenets and actions are like a poster child for everything I abhor, from their environmental record to their record on social issues and foreign policy and pretty much everything in between. So the choice is clear for me. Your choice is your choice. I'm not going to please everybody, I learned that a long time ago. Not going to try.

I read a conservative talking head opining yesterday about Trump's rescuing us from a lagging Obama economy.

Now that is not exactly historically correct but for the sake of argument, if I was to pretend that it was, do people not remember that Obama stepped in to sweep up the horrible mess from the great recession of the Bush years?

Unfortunately, Democrats always have to clean up the messes. Republicans have conveniently short memories. We have had ten years now without a recession, at the expense of massive debt and spending.

The clock is now ticking.

The truth is that things have mostly proceeded steadily. 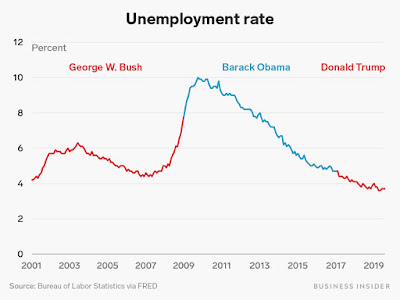 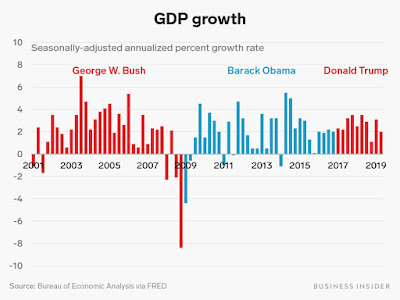 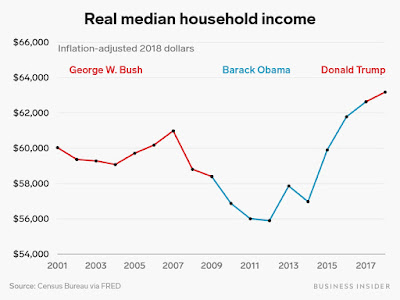 Looks like Obama did most of the heavy lifting here, doesn't it?

There is nothing wrong with having a political opinion, not sure I trust people who don't have one, either way.

Hudgins sent a thoughtful piece over yesterday from Heather Cox Richardson, specifically the part about the influence of Russian money on our political system.

Republicans claim that Dems wanted to impeach Trump from his first day in office. That is not exactly true. We just knew that it was just a matter of time before the morally bankrupt liar did himself in. 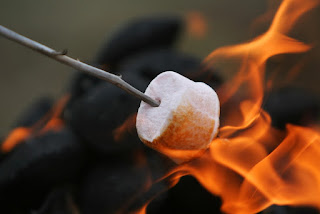 “Morally bankrupt liar” is an apt description of the Cretin!

My feelings exactly, but I wouldn't have been so nice about saying it. ~ Diane O