Metrics for the auction look good.  Over 800k impressions, So far. 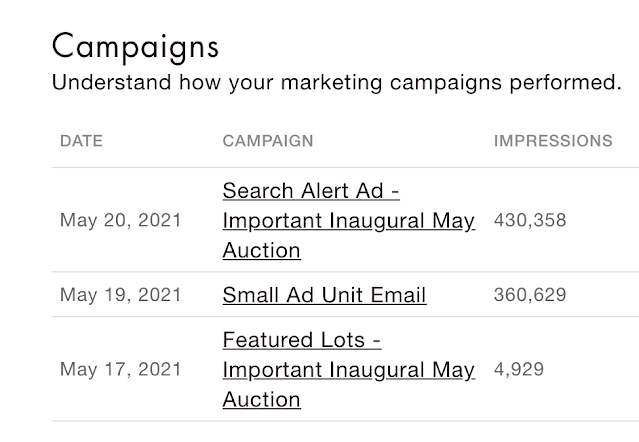 You, know what you can buy with metrics? Jacksquat. Metrics and three bucks might still score you a cup of coffee in some places, if you don't ask for any of the fancy, flavored crap anyway.

Still, I am feeling pretty good. They gave me an option to livestream the thing and play auction colonel impressario behind the camera.

It was tempting but my friends said it would be probably too distracting. Maybe with a couple under my belt. I reluctantly passed.

Would need to buy a leisure suit with a wide lapel, will be just like me crooning at the Diamond Lounge at the Roadway Inn. I think I could be very entertaining but it will sadly have to wait.

Besides, can you imagine me crashing and burning in front of a national audience? Egads there are people that would love to see that, I bet, for the entertainment value if nothing else. But I am not going to give them the chance.

Anyway I have over 450 approved bidders, with more coming on every hour and a heap of money already committed. Still, I have watched auctions with lots of bidders and watchers sink like the titanic's boozy uncle, no sure thing until there is a sure thing. Fingers crossed.

Already thinking about the next two. Want to do a baseball sports auction and then another one like this one, with more high quality Native American, which I have plenty of.

I do have a prediction on this one. How about this; It will not be as great as I hoped, nor as bad as I fear. There are things that I think will kill that will sink like a stone and things I deem worthless that will bring stupid money.

It will work itself out. I will come out of the thing no smarter but will hopefully have a little cash in my pocket. Insh'allah.

Good luck. I think Barry is wrong, you learn that the item you like the least has as good a chance of attracting a buyer as anything else on offer. So, hopefully this rendition of Lorna will soon be gone.

We will see. You may be right. Cam and I used to play a game called "what is the ugliest thing in the show." We would walk it right before opening. Invariably the first thing that sold.