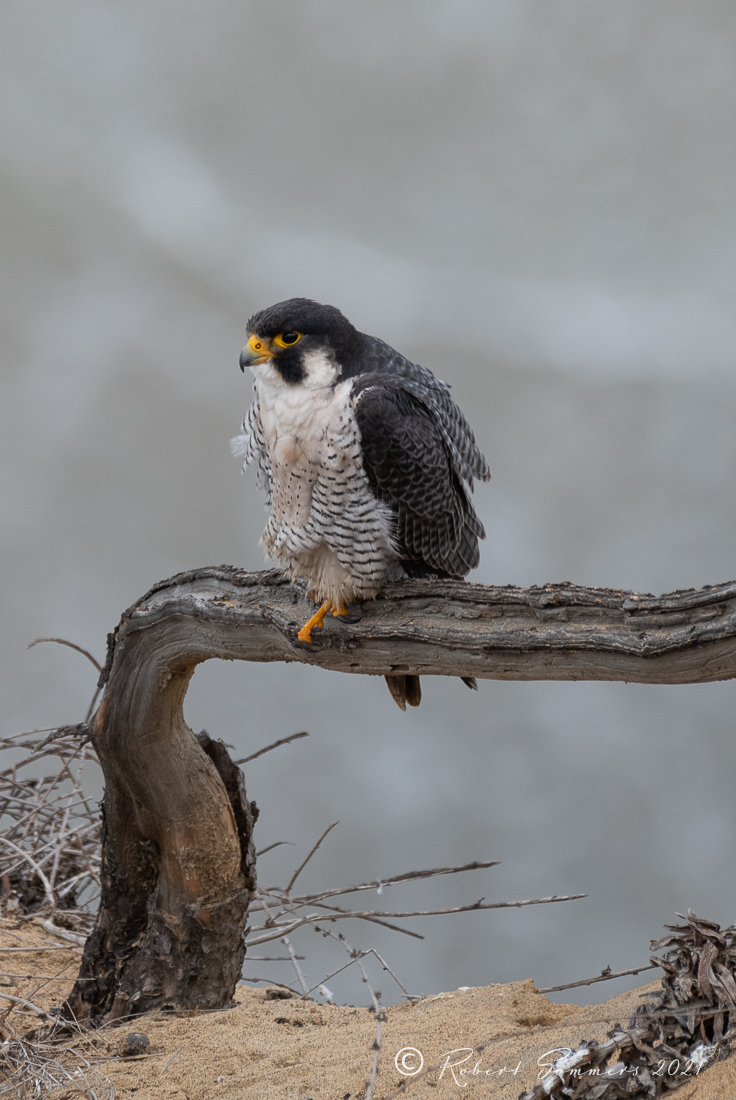 After working pretty hard for over a month getting ready for the auction, my auction handler in Pennsylvania, Becky, suggested I take some needed down time before jumping back in this week.
I was working myself into a tizzy.

So I have basically chilled this week.  Tightened a few little things up but mostly left it alone, the learning curve starts again this Wednesday and I will go back to hitting the books. 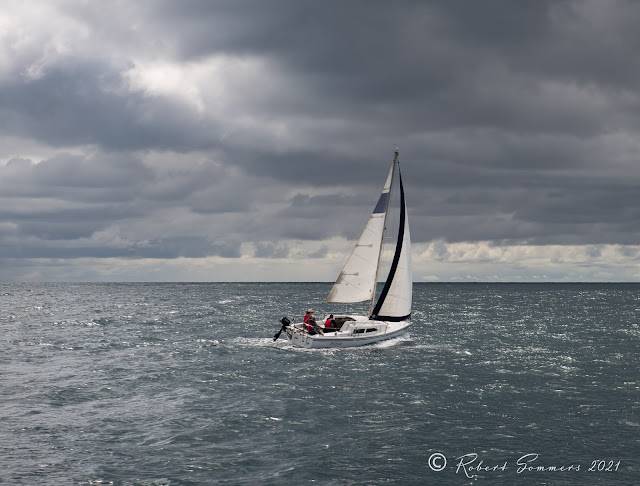 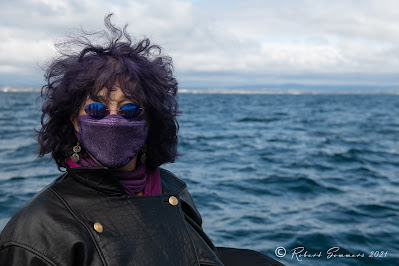 Yesterday Leslie and I went out whale watching. I decided not to bring a long lens, just to enjoy myself and not worry about photography.

The weather was cool the wind was brisk, the waves were choppy. But it turned out to be an epic day. Bad weather or not, we were going to have a good time.

First we ran into a team of common dolphins. 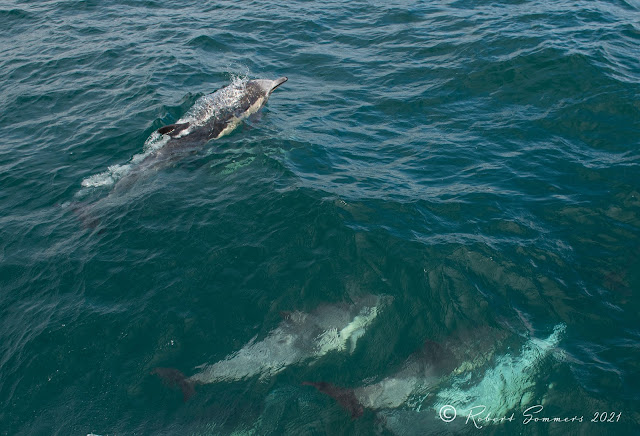 Not a huge pod but they had fun leading our boat around for a while. 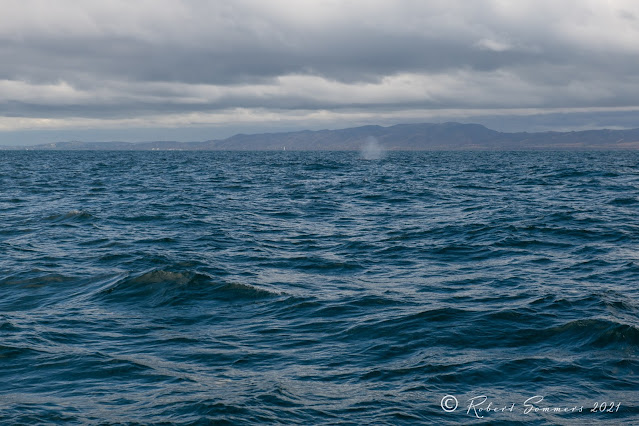 Then we got into a large pod of fin whales, five I believe to be exact and they spent an hour or so doing large and small circles around the boat. These baleen whales are the second largest in the world after blues, they run about 85 feet long. 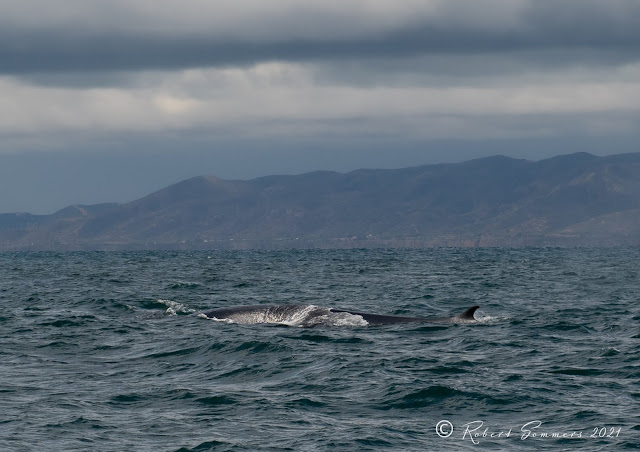 One of the fin whales did something the captain (and obviously we) had never seen before, she jumped out of the water and did a horizontal barrel roll. Of course I didn't have a camera ready but I did see it and it was perfectly fine too. 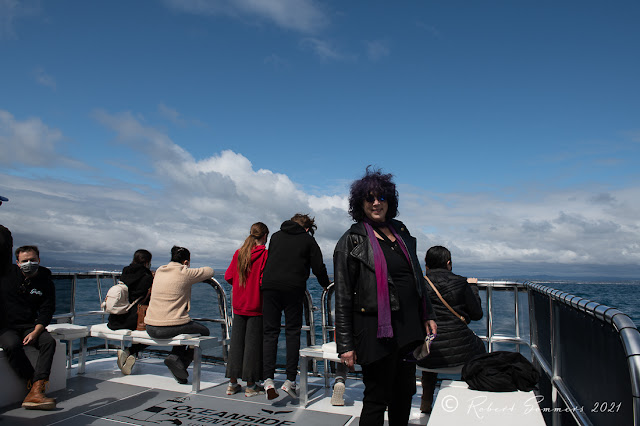 Captain Chris said that Leslie and I were good luck, last time out he saw humpbacks horizontally lunging into a bait ball twice, and he had only seen that once before in his life. We certainly feel lucky, it was very cool. 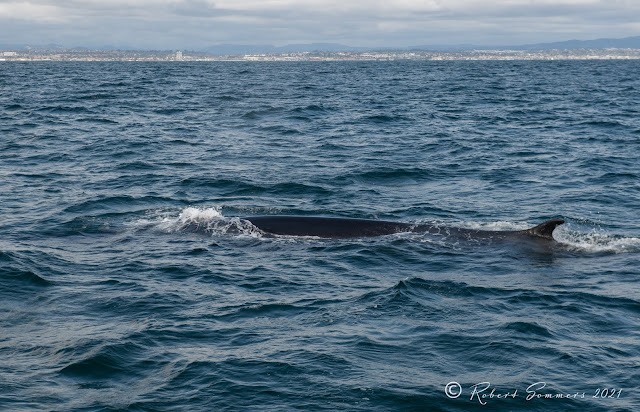 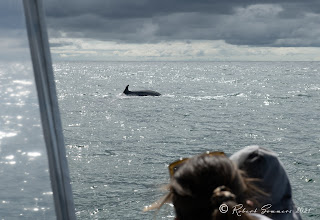 At several points the whales were about twenty to twenty five feet away from the boat. It was a nice day.

No epic shots unfortunately but as they say, sometimes you have to be there. 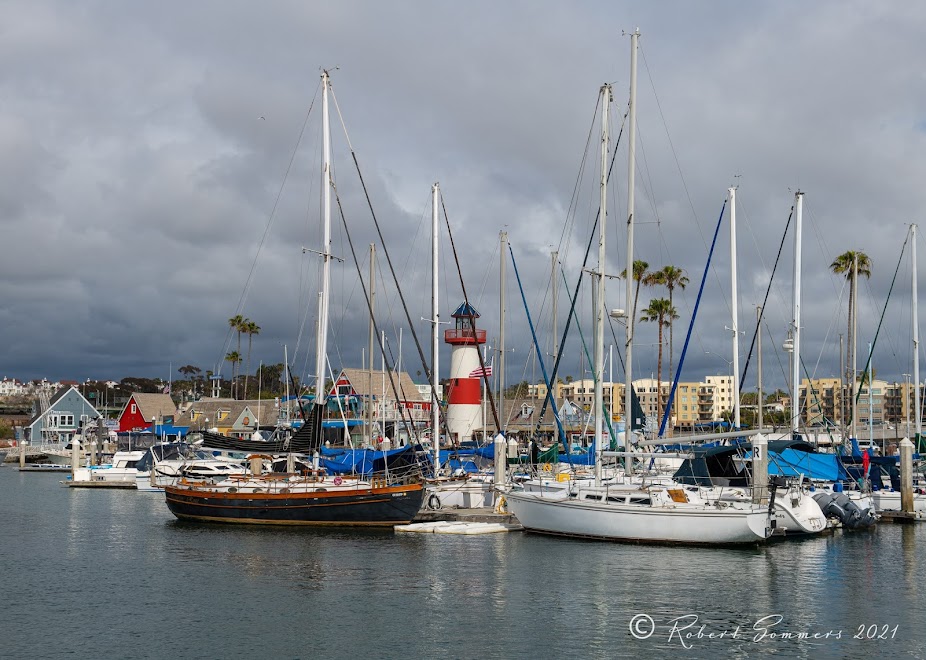 Afterwards we shared a sourdough bread bowl of chowder and brought some sushi grade ahi to take home. 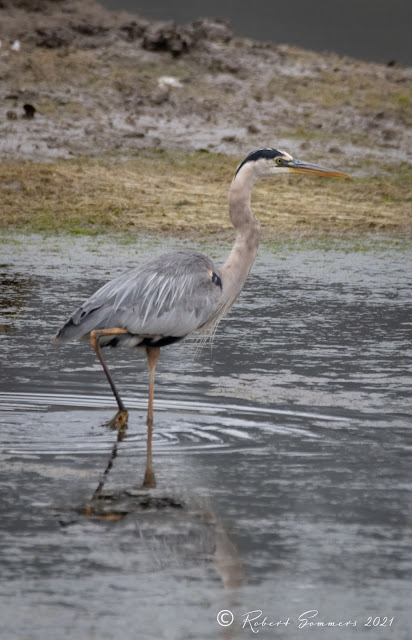 Today the adventure continued with Ken.

I picked him up at Panera in Escondido and after coffee we drove down to Torrey Pines Reserve to see if there was a baby peregrine falcon around anywhere.

It is that time of the year. 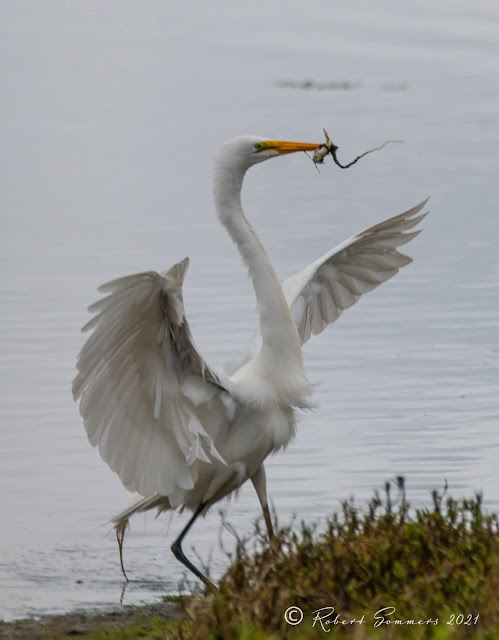 We stopped at Peñasquitos Marsh and shot a few shorebirds on the way in. 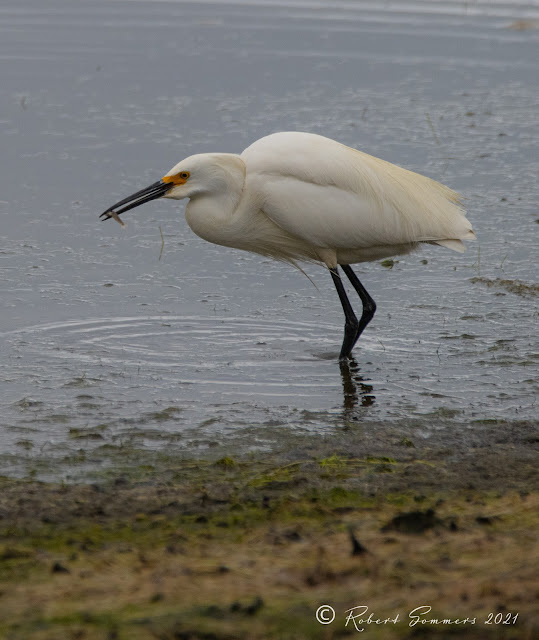 The herons and egrets were all busy fishing. Successfully, I might add. 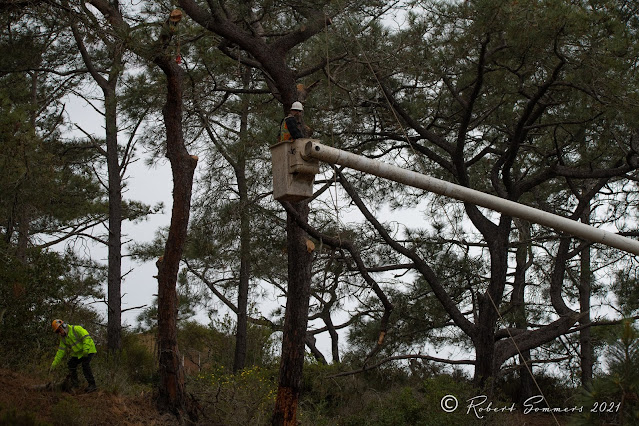 Unfortunately the powers that be are doing tree work at the reserve so the access road is closed.

We had to walk up the steep hill with our gear and my overweight self and it was a bit of a needed PITA. 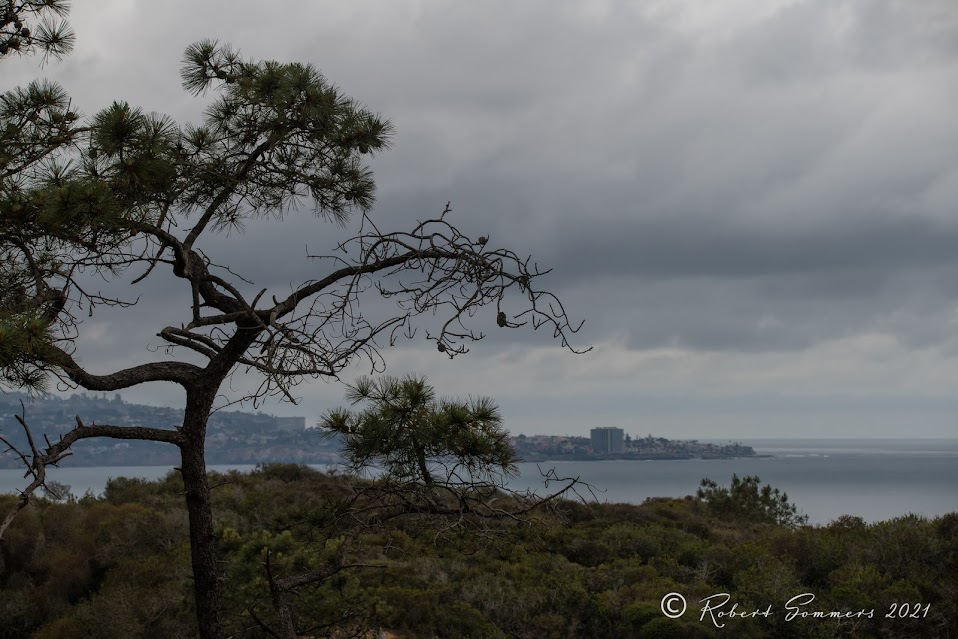 I am pleased to announce we finally made it and we hiked on over to the Northern lookout on the trail. 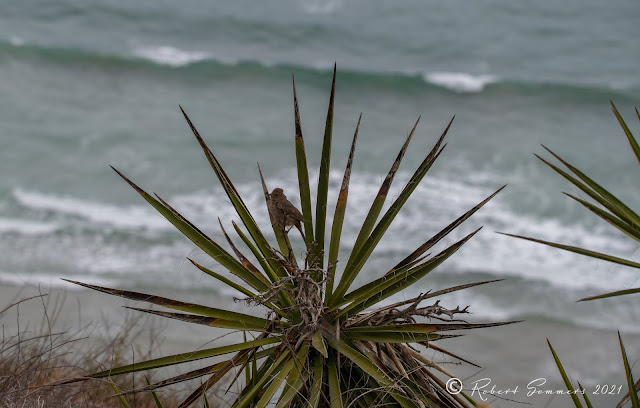 It rained in the morning and the weather was not ideal but it was wonderful to be back at a familiar and favorite vantage. Something about the confluence of pines and cactus. And waves. 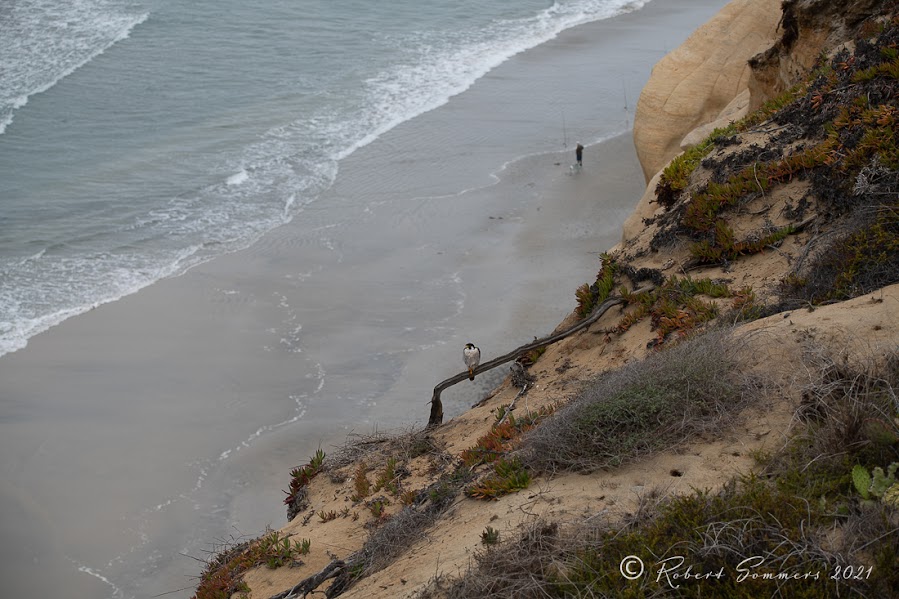 Nothing showed for about twenty minutes and then Herb walked by and he wordlessly hooked his thumb for us to follow him and he led us to where the male falcon sat on a branch.
Mike Reardon and I had shot the male on this very branch before. 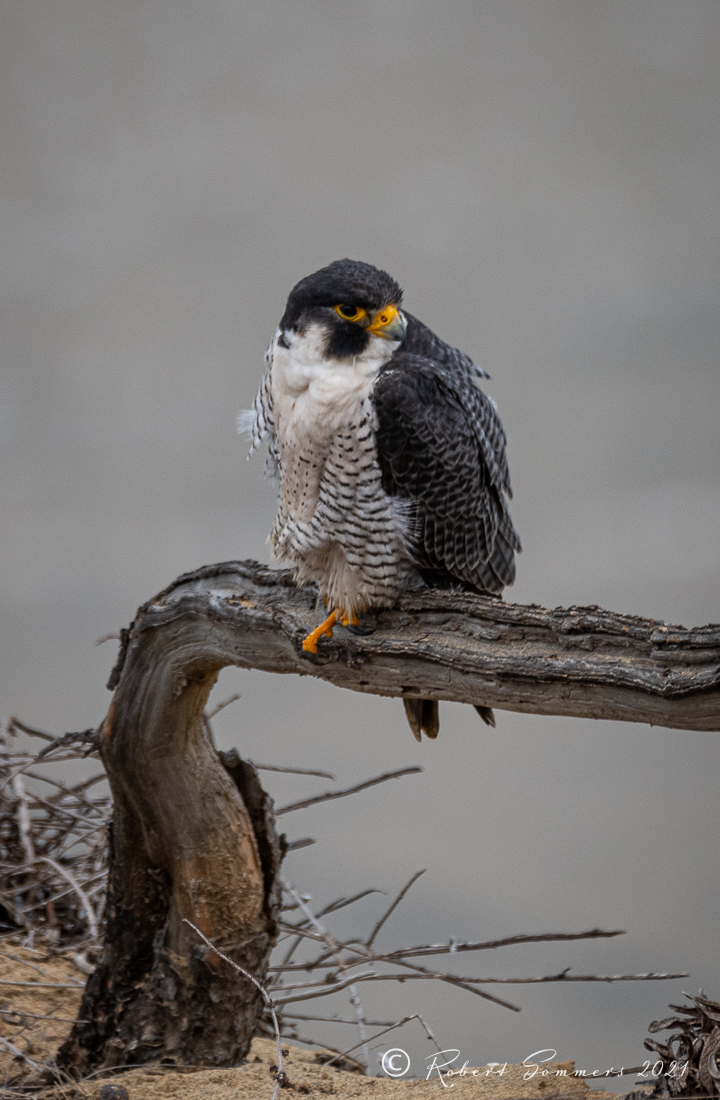 The parents had one progeny this year, it started flying about five days ago and the nest was moved south in a more private vantage. Herb is a docent at the reserve I have met many times before, an affable and very funny German man.

We traded puns for a while and then he told us that this male is not banded, only the female is, it is done in the nest and no one is banding at Torrey Pines anymore.

It is unusual to have only one chick, but it was the same last year. This one started flying about five days ago but we did not see any acrobatics or food exchanges. It kept itself scarce. 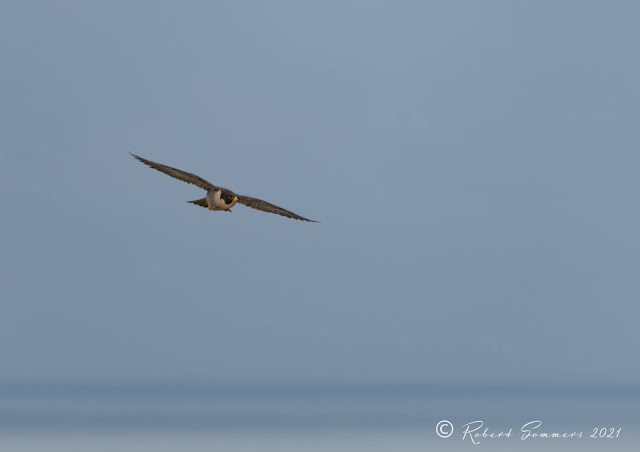 Soon thereafter, the mother flew in. 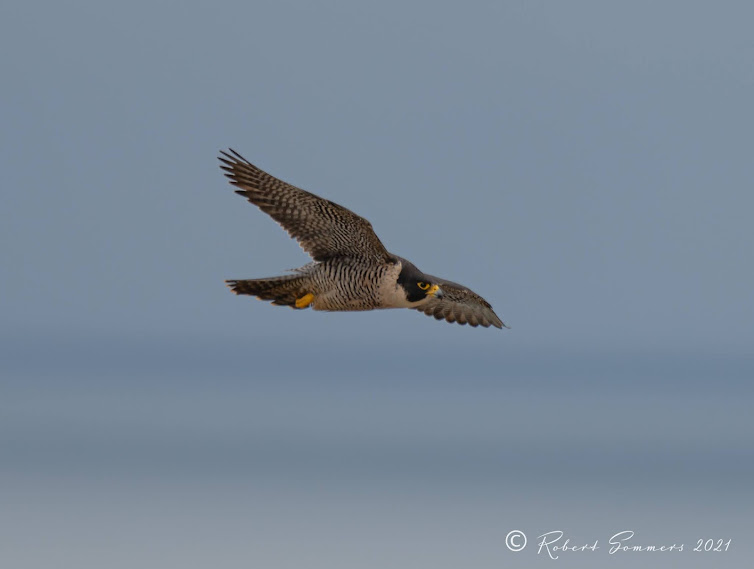 Herb explained that the mother was trying to coax her progeny into flying, learning the acrobatics of flight and participating in airborne food exchanges. 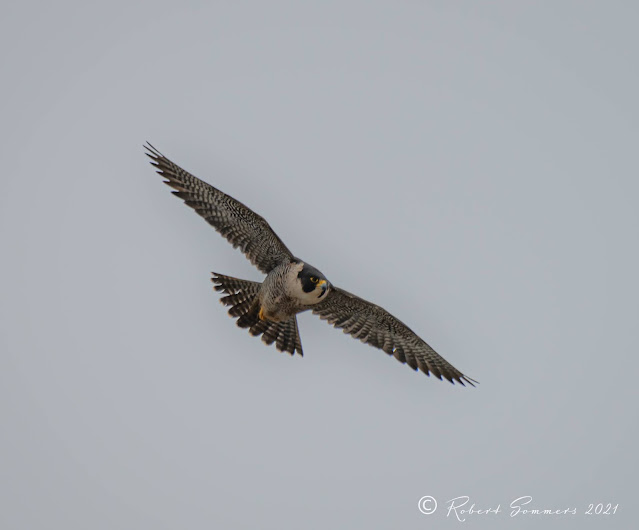 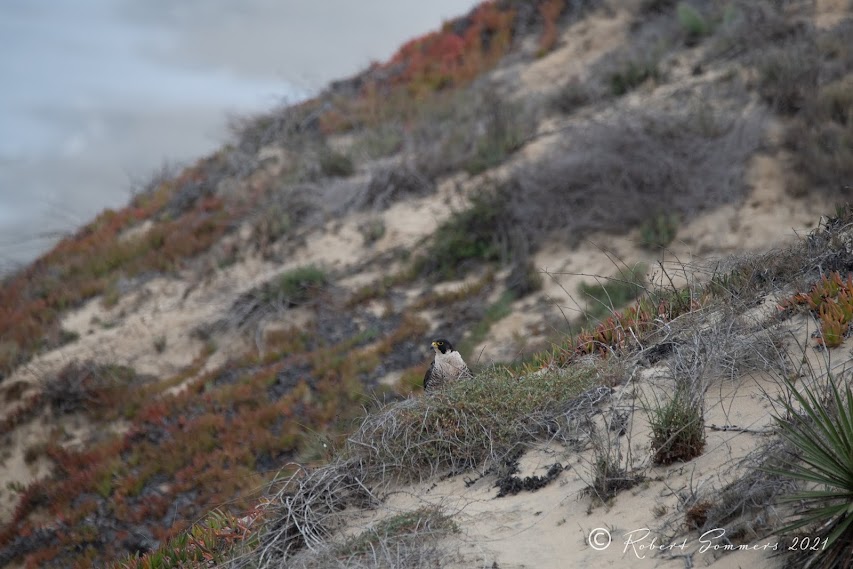 The mother falcon made landfall about sixty yards from us. 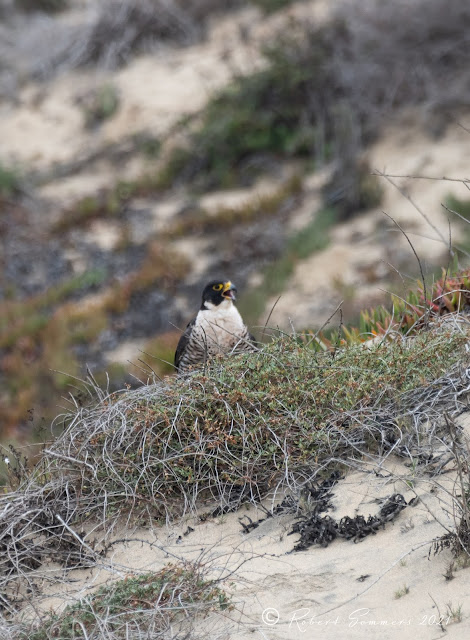 It made a series of soft noises to her chick trying to get him to come play. No luck.

I didn't bring my good, fast (and heavy) lens. Shot with the slow Sigma. Boy does it make a difference, makes me appreciate the Nikkor.

Still the shots are almost acceptable at times and it has a greater reach at 600mm. Makes my point anyway, at least conceptually.

Some of the problems are definitely operator error, some the limits of the camera rig.

The male and female flew for a while but junior never took off. 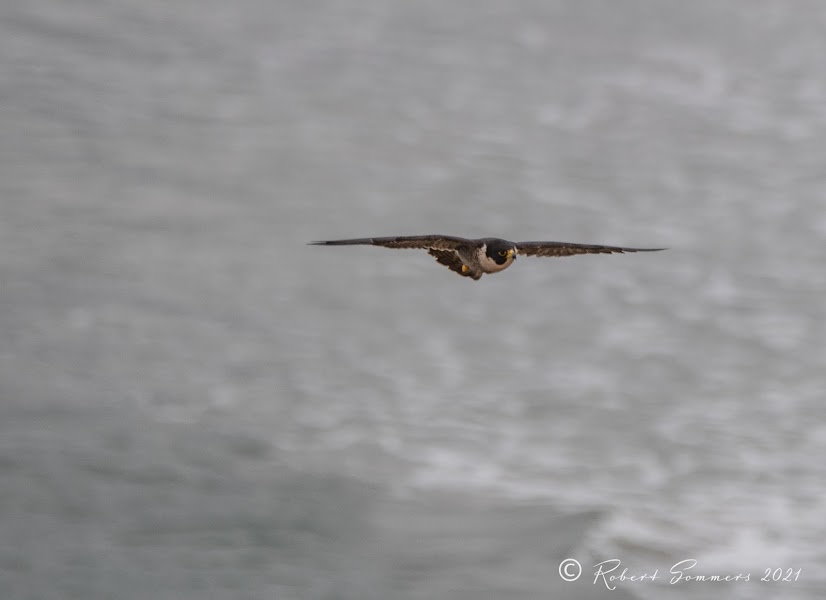 Honestly, any time I can see and photograph peregrine falcons I feel very privileged and lucky. Blurry or not. 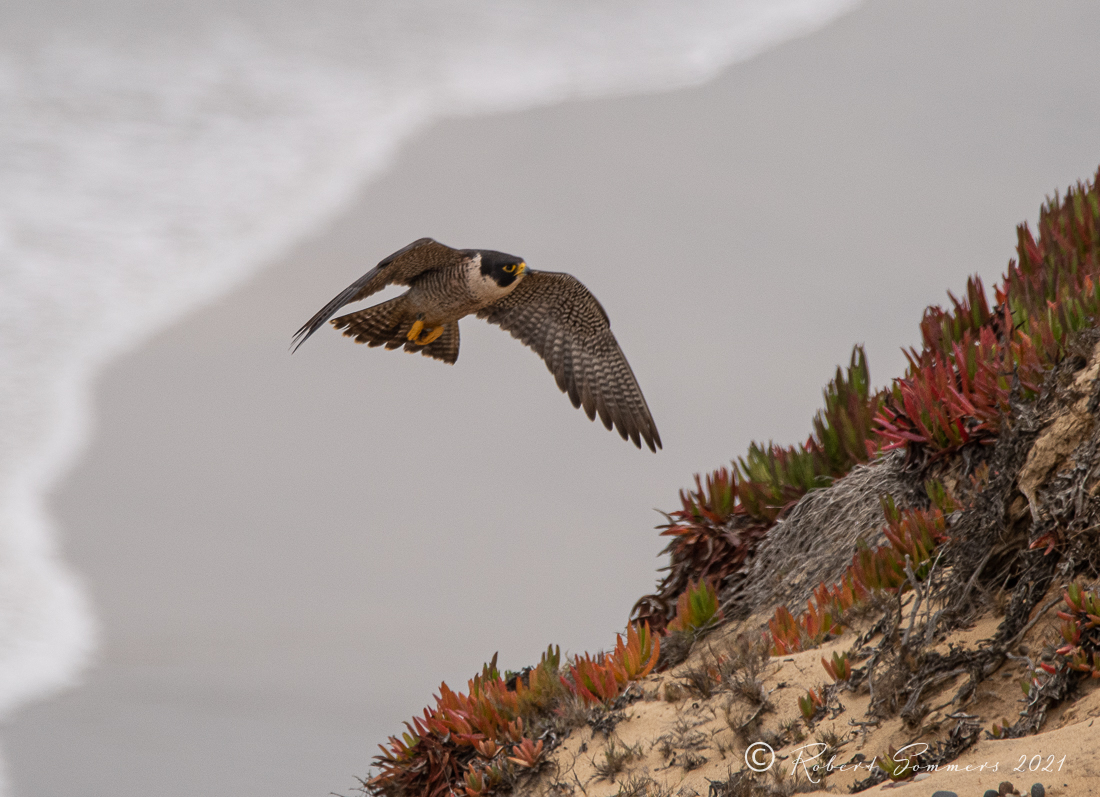 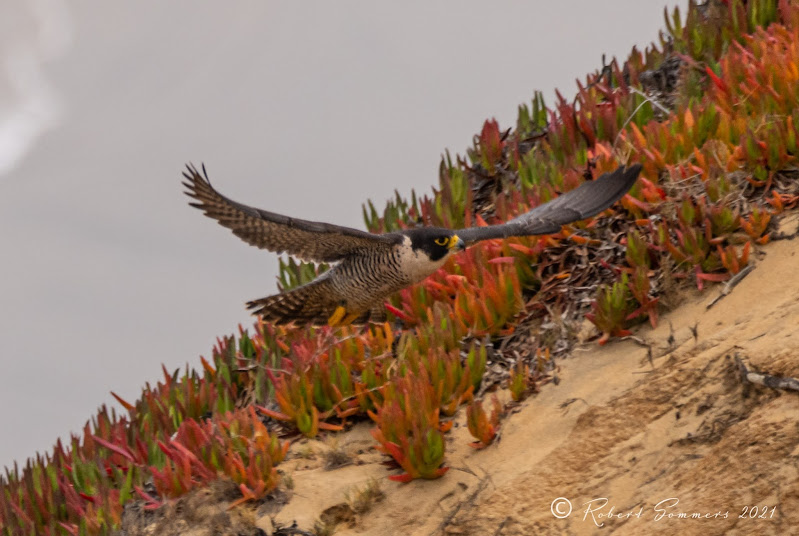 We decided to head out. After all, we had an appointment with a Chinese restaurant to make. 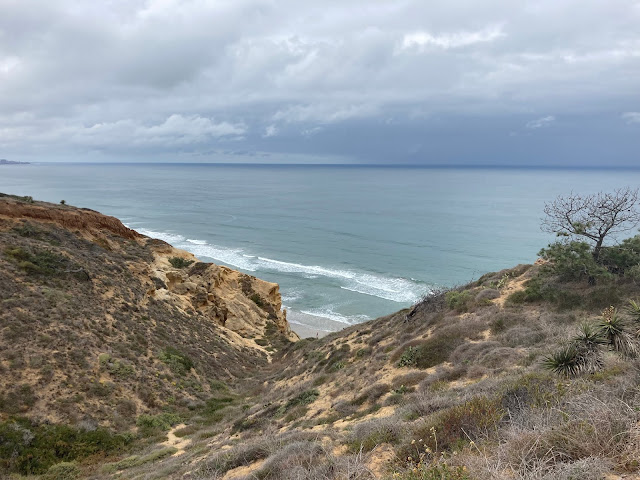 As we left the fledgling peregrine falcon flew right up from the marsh across the road to my right and right across my line of vision. Could barely snap a shot. But I did. 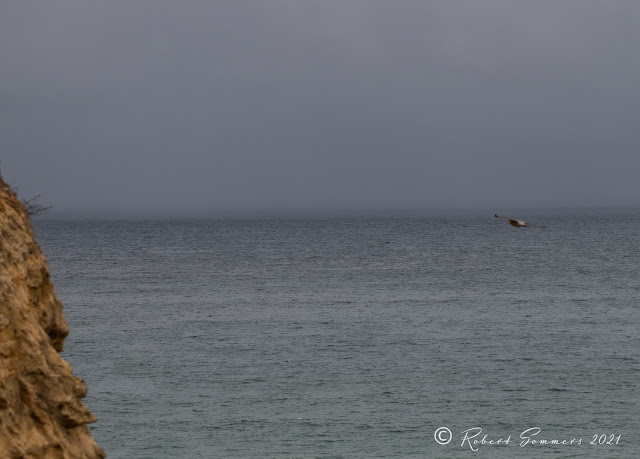 All in all, an excellent few days, in every which way. And Ken bought me lunch! Not a bad life! 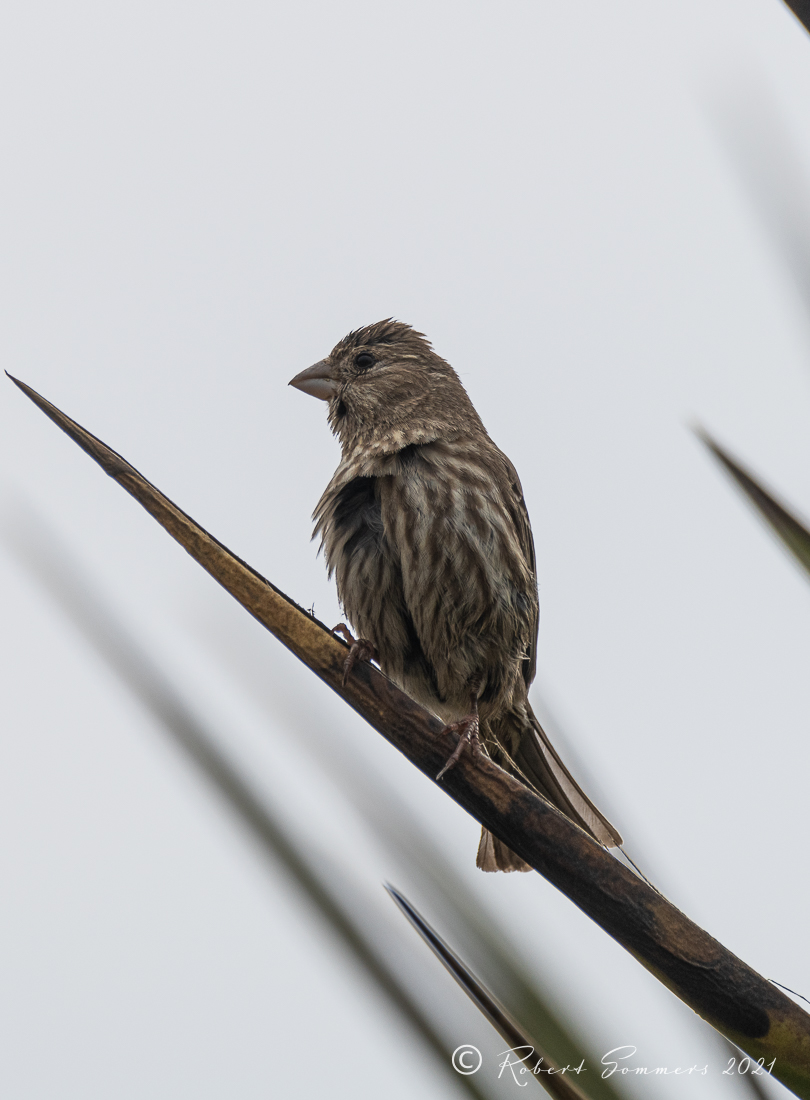 I’m so happy you got out and relaxed! No more stressing!! ☺️☺️

Thank you Becky from Live Auctioneers!

I need to be there! I remember that branch... I wonder if it is the same bird?

Speaking as a keen whale observer for many years I would say that watching an adult fin whale come out of the water and execute a horizontal barrel roll would have to top almost anybody’s list of whale watching highlights!