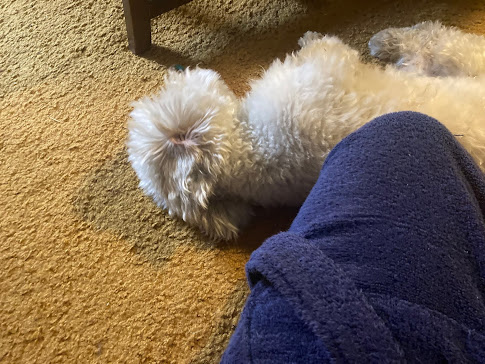 I think I need to finish the lost dog story. Whitey, as I called him (Leslie hated it, said I wasn't politically correct) was having a great time at my house.

He liked to go outside and chase the rabbits around, got along well with the cats, was mostly a perfect gentleman except for an occasional pee in the hallway.

We made every possible effort to find his family.

We posted on every social media site, Friends of Fallbrook, Facebook, Nextdoor, Fallbrook Lost and Found. Nothing. Alerted all the neighbors. Zip.

Leslie took him to the vet and found out that he was neither fixed nor chipped.

He seemed to be wounded, was very tender in his flanks. Still amazed that he made it out to our road without getting eaten.

A man on Nextdoor wrote me (incorrectly, it turns out) that he had seen the dog running up and down Santa Margarita and he believed that he came from a drug rehab group home there called Paragon. "Great," we thought. "Do we want to put the dog back in that environment?"

We had a several very nice and sincere people interested in adoption. We wrestled with all sorts of possibilities for the canine's future when we got the text from Beth. A girl was looking for her lost dog on Facebook, her mother had accidentally let it out while she was helping her sister move out of state. She loved the dog very deeply.

Leslie returned the pooch yesterday. I wish Whitey (actually Max) and all parties concerned nothing but the very best.

You guys really went the long mile to find the owner! That's a fantastic story.

We've outlived four dogs, and our 5th may outlive us? When we get a dog, always a rescue, we make sure the dog is totally co-dependent, love that term - Not.

Not only have all our dogs returned when we call. On a couple of occasions, we've left them unknowingly outside a gate - Every one of them just sat down. All of them didn't move from that spot until our brains returned, and we frantically went looking.