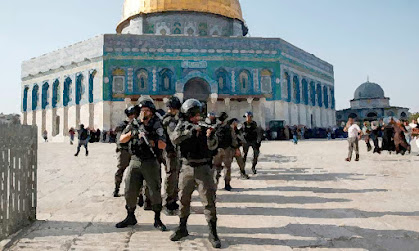 Good luck figuring out the good guys from the bad guys in the middle east. The current imbroglio in East Jerusalem assuredly has plenty of both. Just depends on how far back one cares to look, I suppose.

Many people are weighing in on the conflagration, Omar and Tlaib's latest vitriol towards Israel is quite predictable.

For a different perspective one might read Elliot Abrams, he whose reputation was mortally sullied in Iran Contra. I don't agree in toto but some of his points bear considering before you start the process of assigning blame.

Not that Netanyahu didn't bring this on with his kowtowing to the religious right and heavy handed abuse of the Palestinians. He did. But the first thing you learn in the region is that nobody's hands are clean.

Their both crazy! signed a yid!