I really enjoy the genre. The beginning of the last century was evidently a wild and woolly time. 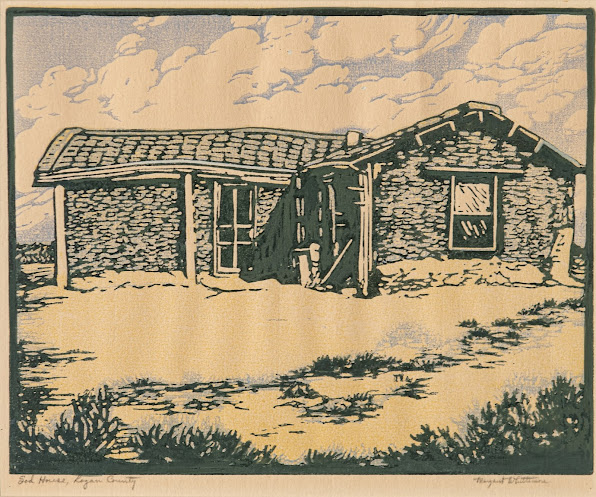 One of the items in my auction, in fact the first lot, is this colored woodblock by Margaret Whittemore.

This one is called Sod house, Logan County.

It is a very lovely example of the colored woodblock, she is dreadfully undervalued but most women, especially obscure women from the midwest, are undervalued in today's market.

Thankfully that is changing, as they are every bit as good if not better than the male artists.

But I am not writing this post to discuss either her artistic acumen or societal artistic inequality.

It just so happens that she shares her sobriquet with two other famous women, a suffragette and a lesser known bank robber gangster moll also known as Tiger Lil.

And that is where my research took me and what constitutes the subject of this post. 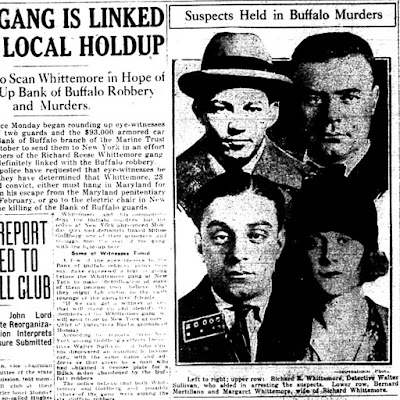 This Margaret Whittemore was part of one of the most dangerous gangs of the last century, the Whittemore Gang.

In 1925 and 1926 this gang, led by Richard Whittemore, terrorized the eastern seaboard, from Maryland to New York.

Richard Whittemore, a longtime career criminal, escaped from the Maryland state penitentiary on February 20, 1925, after killing prison guard Robert Holtman. He reunited with his wife Margaret Whittemore, known as Tiger Lil and the Tiger Girl, and began recruiting a team of stick up artists and hold up men such as Bernard Mortillaro, Pasquale Chicarelli, Joseph Ross, Morris "Shuffles" Goldberg, Leopold Gilden, Anthony Paladino and brothers Jake and Leon Kraemer. Whittemore and his gang would then commit a series of bank robberies in two states during a 12-month period

The gang committed its first armed robbery, only four days after Whittemore's prison escape, when they ambushed a Western Maryland Dairy payroll shipment in Baltimore. The driver and a guard were shot during the robbery and the gang escaped with $16,034 in cash. Three weeks later, the gang robbed Baltimore bank messenger J. Wahl Holtzman of $8,792 in broad daylight, beating him unconscious and then stealing the money he was carrying. 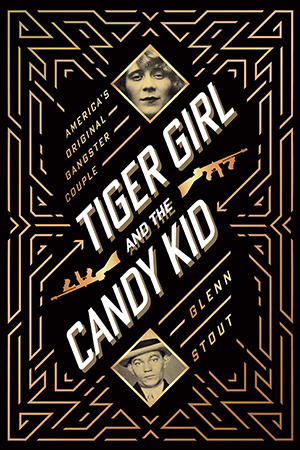 "Shuffles" Goldberg? Really, are you serious? You didn't make that up? Beautiful. Shuffles was an observant man, he couldn't rob on shabbos...

Anyway the gang kept up the mayhem for the better part of two years, engaging in all sorts of sordid gangster stuff. Read the wikipedia entry, pretty saucy.

A guy wrote a book about the gang a few years ago, too. These hoods had color, took pride in their work. Craftsmen, if you will, with a very  special skill set.

They called Richard the Candy Kid, a great moniker for a hoodlum with a dame named Tiger Lil.

Reportedly they developed a taste for heroin and the collective monkey on their back led to their eventual downfall.

The Candy Kid ended up hanging from a rope, not the sweetest ending for a dulcet criminal.

The tiger girl managed to get off and newly declawed, perhaps started her budding new career as a woodblock artist?

Seriously, he swung from a hemp rope and she lived to the ripe old age of ninety. Now how is that fair? She must have had nine lives.

Not sure what she was doing all that time, planting petunias? Or visiting the cemetery on a moonless night in her long black veil?

On January 11, 1926, they robbed Belgian diamond merchants Albert Goudris and Emanuel Veerman on West 48th Street in Manhattan. This was their most successful haul yet, having gotten $175,000 in gems, however this was also to be their last robbery. They spent the next nine weeks celebrating, spending much of their loot, According to federal watchdog Harry Anslinger, many, if not all, of the gang were using heroin by this time. Their drug use may have been the contributing factor for their capture when the New York Police Department were able to arrest eight of the surviving gang members on March 19, without firing a shot.

Whittemore was first tried in Buffalo for the armored car hijacking but the trial ended in a hung jury on April 27, 1926, and a mistrial was declared. Although the charges were dropped, Whittemore was extradited to Maryland where he was charged with the murder of prison guard Robert Holtman. He was convicted on May 21, condemned to death on June 10, and hanged on Friday, August 13, 1926.Two other members of the gang, the Kraemer brothers, were convicted on robbery charges and sentenced to 40 years each in a New York prison.Margaret Whittemore was arrested but never convicted for her roles in any of the crimes. She died at age 90 on April 13, 1993.

You see how boring today's criminals are? Blah. Where's our Candy Kid? No pizazz at all these days. Whatever happened to Robin Hood and Pretty Boy Floyd? No integrity today, even among thieves I suppose.

Fascinating story....truth is always stranger and more interesting than fiction.