I thought that I would be able to button up the first phase of my auction preparation today but I couldn't. I am down to about ten watercolors and prints behind glass. Except for these ten, all the objects and paintings in my sale are now photographed and cataloged. One hundred ninety down, ten to go.

I tried to illuminate the works with my Smith Victor floods but they are too bright and it looked awful too. Natural light is best. Hopefully I will have better luck tomorrow. Worse comes to worse I will take them all out of frame. That would be the best optimal thing but it requires a lot time and I don't have a lot of time right now.

I have been working a little less this week. More ten and eleven hour days, not fourteen like last week. I found I was making too many mistakes when I was fried after a long day. So I took a small step back. 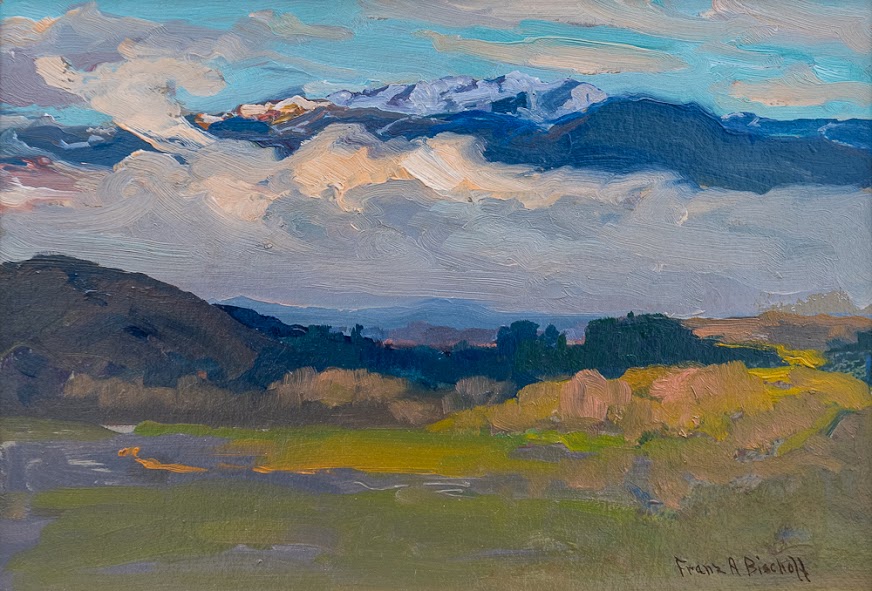 This is one of my newest acquisitions that will be in the auction. This oil on board is a 13 x 19" work by Franz Bischoff. I was told that its name is Cloud cover under the San Gabriels but it is not visibly titled.
It was sold to a private party that I bought it from by the ex director of the Laguna Beach Art Museum, Tom Enman back in 1983.

I really like it. Bischoff had a flair with strong color and light that is perhaps unmatched by his Southern California impressionist peers. 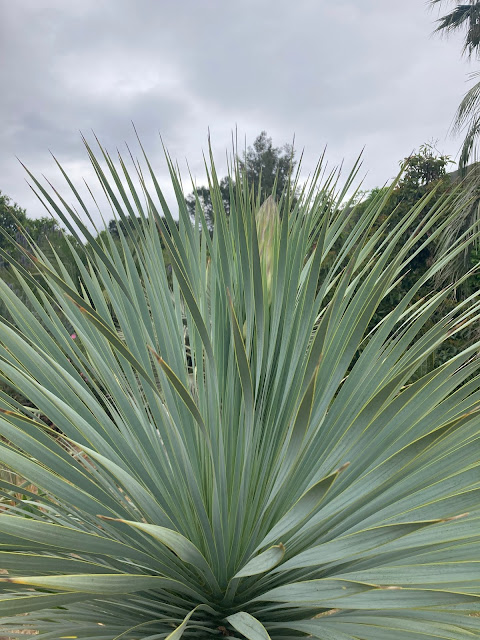 I left early in the morning and noticed that my Yucca Rostrata is now throwing a nascent spike.

It has been several years since it has done so and they are breathtaking when in bloom if you are into that sort of thing.

Of course there is talk that my plant is not a true rostrata specimen but instead a tissue culture frankenstein conceived by a mad scientist up on Gavilan.

No matter its true origins and parentage, the plant is a joy in my garden.

I want to thank Jeff for digging up the clivea for me. Planted this afternoon when I got home, along with a purple bottlebrush.

I am looking for a couple nice climbing roses for my front fence.

I want a red orange one and a purple. I had the former for the longest time but it succumbed to entropy and age.

Anyone have any suggestions? I already have a large Cecil Brunner/Banksia climbing rose that is fifty  years old and don't need anymore pink.

I don't even know where to go to get a climbing rose now that Tropic World is gone and the Moonies have taken over. Hunters in Lemon Grove is rather far.

You know a place?

I am not sure why but the blog readership is blowing up again, 2700 views yesterday, 3098 today. This is about double normal and I am not sure what is driving it, perhaps it is a bot. It would be too delusional to think that my brilliance is starting to be recognized and that one day I could become a real life influencer in this world of ours.

Boy, that Bischoff is a real beauty ~ Diane O

A trick I used to use with Smith Victors was putting a sheet of pure white linen in front of the lamp. This provided good diffusion and helped with glare. Still one lamp was always closer to the artwork than the other creating color shift problems along with any blue light that snuck in. The studio biz is pretty scientific in approach and uses modern LED type lamps that are better behaved. If the auction takes off for you it may be worth learning to use modern studio lights. I never really worked it out and I usually fell back to the method you used, sunlight either direct or in shade. It is a really challenging thing and I can't claim to have ever mastered it although I usually got good images. Recreating "north light" indoors can work pretty well but all the caveats I mentioned still turn up to make post processing a good re creation of Hell.

Whoops, didn't mean to throw off your tic-counters, it was just a boring Sunday and I had nothing better to do! ;>)