End of the race 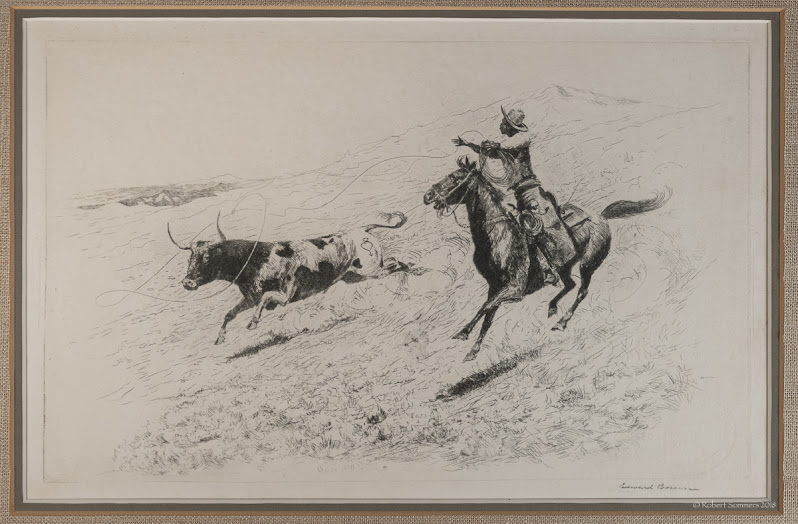 A buyer that I had never met before contacted me the other day about buying this pencil signed etching by the great cowboy artist, Edward Borein (1872-1945.)
I gave him a price and after a day or two for some reason he diverted to another print that I had unfortunately already sold.

He texted me today that he had decided against buying this print because the cowboy was black.

I really don't know how to react. I never thought the rider was black, I suppose he could be or a hispanic vaquero, it never occurred to me but they did do a lot of the riding and work out here and it makes no difference to me, I would personally consider it a positive. There were a lot of black cowboys, you know?

Borein was a working cowboy and the saddle looks like a Visalia rig, so I assume the scene is probably from California. This is the way Borein depicted his vaqueros, being out in the sun all day lent itself to dark, sunburned faces. Whatever the ethnicity, the rider threw a nice loop.

I think that I am through dealing with this person. He gives me a sick feeling in my stomach.

Edward Borein (1872-1945) was born in San Leandro, California. He began sketching horses, cowboys and steers at an very early age. By the time he was seventeen, he achieved the main ambition of his youthful life and became a working cowboy drifting through most areas of the West, from Mexico to Montana.

In 1907 Borein went to New York to learn etching techniques. He opened a studio so typical of the West in its atmosphere that he soon attracted the companionship of other homesick Western artists working in the East at that time. Charles Russell came to regard him as a brother. Borein was one of the most popular figures on the Western scene. The fact that he became the intimate friend of such men as Will Rogers, President Theodore Roosevelt, Leo Carillo and others of equal prominence testifies to his attractive personality as well as his talent.

Feeling uncomfortable in New York City, and electing not to return to his more familiar Oakland surroundings, Borein took his new bride, Lucille Maxwell, to Santa Barbara in 1921 and established a studio there. His old cronies and new friends found this studio a delightful place to gather.Watercolors, especially in his later life, was a favorite medium of Edward Borein. He was equally adept at pen-and-ink drawing, and his etchings were of such vigorous, realistic quality that no Western artist has surpassed him in this field.

I received this letter from Will:

Sorry for your trouble. It is a fine, fine Borein. As for color ID, could be either, and yeah, that’s a positive for me too as those images are very scarce, especially in California. The rodeo competition event of bulldogging originated as a novelty performance by a black cowboy in Wyoming at Cheyenne Frontier Days, circa 1916. It later became a competition, but modified by the young white competitors, who chose not to being their steers down by biting them on the upper lip, as the originator did. I’m blanking on his name as write this, to my sorrow.

I grew up knowing that story because my father, Al Chandler (1909-2001), was born in Oregon but raised from the age of 11 in Cheyenne. As his widowed mother was often ill, one of his guardians was Charles Hersig, founder of the Wyoming Hereford Ranch, where my dad spent most of his teens. Dad became a prize winning roper, and continued to compete in the circuits after he began work as a telephone lineman and wire chief for Mountain Bell in Casper.

Your comment about a nice loop inspired me to share this photo of him taken at the Las Vegas, New Mexico rodeo in 1938, age 29. Also a helluva nice loop, which the brahma calf hasn’t even noticed as he runs through it. Dad pointed out to me that he trained his horses (this was one of about 10 he owned at that time) to sit down for the impact as soon as he threw the loop. The knot is visible and positioned to throw the calf upside down, ready for the piggin string. Charlie Bennett, a childhood friend of my dad’s with a third generation ranch near Laramie, surprised him with this long forgotten photo as a Christmas present in 1988. 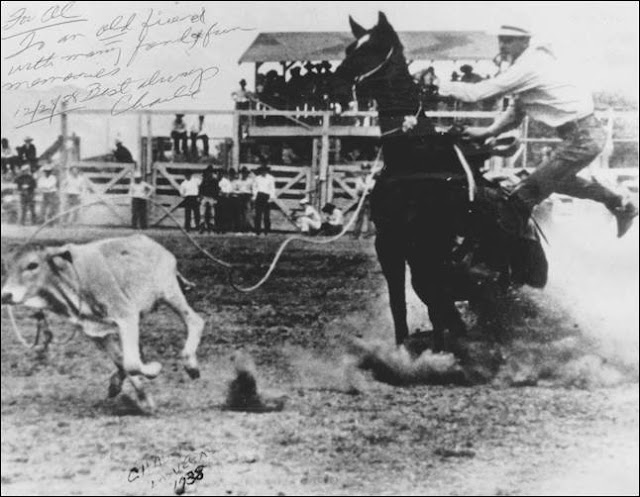 Will may be thinking of famous bulldogger Bill Pickett.
Posted by Blue Heron at 1:45 PM

Could be a black hispanic cowboy, that ought to bug your buyer.

My dad was born in Montana in 1892 and was cowboying at the very early age of 12 or 13.. I remember him telling how to bulldog a steer by grabbing it's lip in your teeth. As far as I know he didn't ever compete in rodeos. just worked cattle all over Montana and Wyoming as a teen. He lied about his age and joined the army at age 14. "I was big for my age". He remained in for months before being found out and discharged.Was told to come back when he was 16. He then worked breaking horses for the Army at Ft, Laramie.

Great addition by Will, thanks for sharing it Robert. In the etching, I especially love the hand gesture of throwing the rope, the thumb in control, ready to close the fist with strength, but such a delicate gesture. It's the center of the piece really, I could look at it all day.
~ Diane O

Wonderful photograph! Thanks for the story accompanying the photo Will.