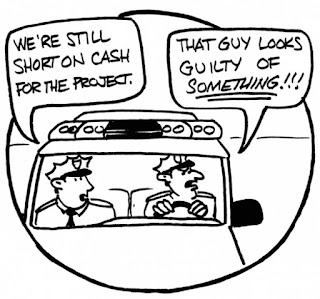 That sucking sound are your constitutional rights going straight down the toilet.

An interesting story on asset confiscation over at Reason. Forget probably cause, you are guilty until you can prove your innocence. Feds need the money.

FBI comes in and raids safe deposit boxes and then tells people to prove the assets are theirs if they want them back.

In legal filings, federal prosecutors have admitted that "some" of the company's customers were "honest citizens," but contend that "the majority of the box-holders are criminals who used USPV's anonymity to hide their ill-gotten wealth."

A clear case of guilt by association. This story led me to the op ed at The Orange County Register, The FBI can't seize first and ask questions later. The gold bugs have been talking about government confiscation for some time. Maybe it is coming.

right on the money!!