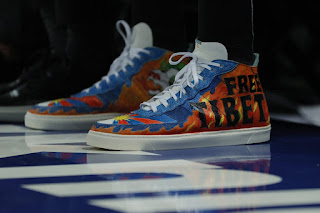 I don't agree with the guy on everything but I applaud him for standing up for what he thinks is right and for going after the brutal communist Chinese regime for their despicable human rights record.

Kanter even took on LeBron James for his silence on China. Good for him. NBA players and owners with fat distribution rights and deals in China will overlook a lot in order to keep the checks rolling in.

What I don't agree with him about is his saying that Americans who disapprove of our country's policies should keep their mouths shut. Dissent is as American as apple pie, Enes. All the way back to throwing tea in Boston Harbor.

As long as we are not violent or burning anything down we here in America are free to speak our mind. It is called freedom of speech.

But good for you for calling out the Chinese dictatorship on Tibet and Uighur. I wish more prominent athletes and corporations would have your courage. Some things are more important than money.

I think we have had too many people recently feeling that it is their right and duty to say the most hateful, racist, and otherwise bigoted things imaginable. I frankly preferred it when they were hiding in their holes and were keeping their mouths shut in fear of the public disapproval, ridicule, and loss of employment.