We are all inundated with these sorts of factoids on our social media but this one should probably be shared. Guess what, according to the fast food company, honestly, this one is true. 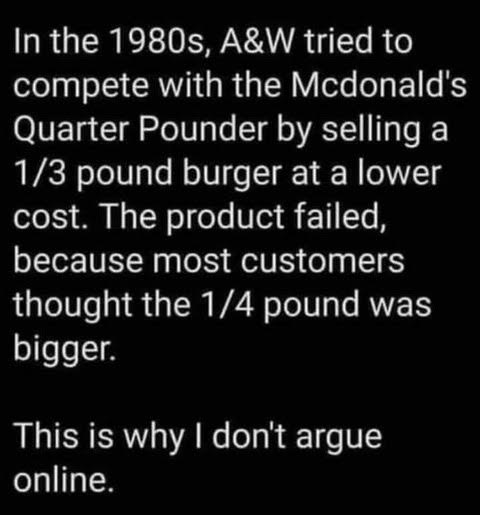 I heard a man speaking about the ignorance and stupidity awash in the world and he made the following point, which I find pretty frightening:
The average i.q. in the world is 97. So wrap your head around the fact that half of the people you meet are even dumber than that.
It really makes things easier to understand.
*
Could states with higher covid rates be breeding more dumb people? Found this info at Healthline:

A  found that infectious disease may be the only really important predictor of average IQ. Researchers believe that this is because if a child becomes ill, the body uses its energy to fight off the infection rather than using it for brain development.

found that cognitive abilities and school performance were impaired in people with malaria (an infectious disease spread by mosquitos) compared to healthy controls.

A study done in the United States found a strong correlation between states with a higher incidence of infectious diseases and lower IQ.

The United States being the world leader that we are, we have discovered, perfected and are marketing to the world a sort of stupidity that is independent of IQ or Education and more potent than both. It is rooted in a preoccupation with resentments and the idea that someone, "they", did "something" to us that threatens our very existence in some grand yet ill defined way, the cure for which is huge overdoses of some political bullshit from the extreme of either Left or Right. It seems to be the national equivalent of bending over and placing a lit stick of dynamite "where the sun don't shine".