Lots of antivaccers are complaining about their precious freedom to get themselves and other people sick and making all sorts of allusions and comparisons to Nazi Germany. 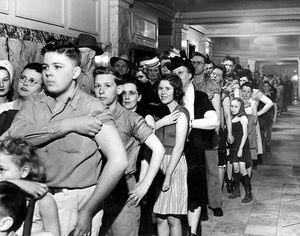 I guess I didn't realize how oppressed I was as a kid.
They told us that we were getting the smallpox vaccine and the polio, either Salk or Sabin and we did so without a word.
Rolled our sleeves up and took the shot. Had to have them if you wanted to go to school.
Figured it was more important to keep ourselves and everybody else healthy and alive than to engage in political grandstanding. 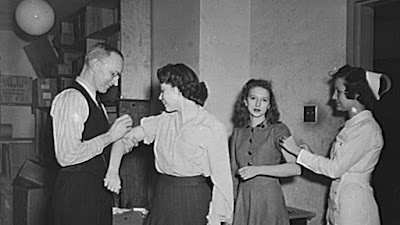 When did vaccines become evil again? Of course there was no right wing media back then suggesting that Satan himself was putting his own juice in the shots in order to track unwitting subjects.
“Dear Christians: the vaccines contain a bioluminescent marker called LUCIFERASE so that you can be tracked,” Robinson blared in her Monday night tweet. “Read the last book of the New Testament to see how this ends.
What a world we live in.
Posted by Blue Heron at 6:42 PM

My theory. There have always been nutcases among us, religious and otherwise. But before the Internet and social media, their nuttery and "influence" were contained to a small local area - those they interacted with in person. Living in CA, you never heard about the crazy ideas of some preacher or school board member from Oklahoma.

Now, all those idiots (and some just mentally ill) have a way to communicate their damaging ideas and bond together with other misguided souls across time and space. And they're heard by millions.

Technology has given us some wonderful gifts. But social media and global communications have this huge downside of allowing toxic ideas and thoughts to spread without check.

Big differences between the world of the fifties and sixties and today. People more or less trusted institutions and everyone had memories of the devastation of contagious disease. We were more mature as a society and things happened like Dr. Salk refusing to take a profit on his vaccine discovery. Now the first thing is to consider how much money can be extracted from a discoveries "value to society". Greed and self dealing are rampant and there is plenty of documentation out there of the dishonesty of government and corporations. I was lucky, working in medical related areas where I saw the BS but could also see that the overall work was still beneficial. Without that kind of in depth knowledge it is not hard to see how people would feel fearful and suspicious. Worst of all though, media companies and politicians make big money on getting people frightened and angry and then the structure of popular social media works to amplify anger and fear. It is a mess.