San Diego County is in the midst of redistricting. Certain communities have been growing and are now larger than the 669,000 residents that are allotted on average per district in the current map.

14 independent citizens have been tasked with the difficult job of adjusting district boundaries for the five supervisorial districts. They have worked very hard and come up with a variety of possible maps and they are trying their best to come up with a solution that will make everybody happy. Unfortunately that is never going to happen. 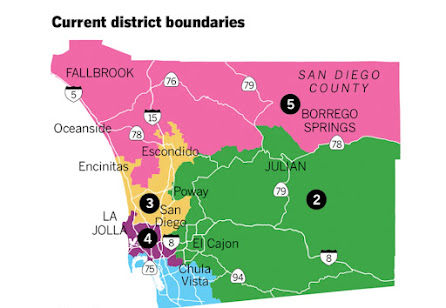 There is a lot of juggling going on. Escondido wants to join Fallbrook, Bonsall, Rainbow, Vista, San Marcos and Oceanside in one district.
But in order to do that, Carlsbad would have to join the coastal communities south. Carlsbad would prefer to stay in the 78 corridor group.
Some folks would prefer to stick Fallbrook in with Escondido, others with Oceanside.
Some in the East County want to have all the unincorporated areas stuck in one district, which would stick Fallbrook in with Santee, Lakeside and other places over an hour away to the south. 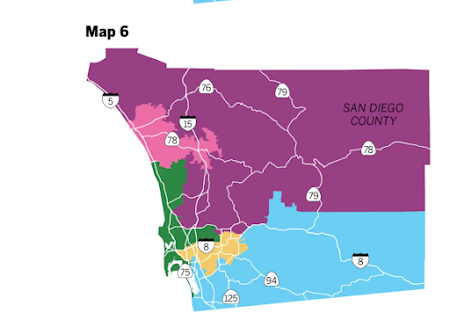 This has led to a conceptual map design that looks like this one on the right. I don't like it at all but who cares what I think?
This map and one other close iteration brings the district down to Highway 8 and peels us away from our North County neighbors.
The San Diego Union has a breakdown on the issue here today which you might be able to read if you can breach the paywall. Or you could even find a tangible, pulp based version.
The County redistricting website is here.
I have followed the issue at arm's length and have been repeatedly assured that politics is not entering into the redistricting calculus.
That is a funny statement and should be looked at with the same suspicion as when someone tells you it is not about the money. It is always about the money and it is always about the politics.
Here is a comment from a guy in Santee that I pulled off the website, James Jeffries:

eComment :
I live in Santee and am horrified at the draft maps. Santee belongs with East County communities like El Cajon, La Mesa, Lakeside, and similar areas. Santee does not belong with coastal communities or areas like Hill Crest. Santee shares similar demographics with East County, we are Chambers of Commerce, traffic issues, roads, water ways, school districts, health care districts, water districts, the list goes on. Lakeside and Santee even share a Sheriff resources as we actually neighbor each other. The attempt to put Santee with any other areas of San Diego is a clear attempt to gerrymander San Diego County in favor of political party. Leave East County with other East County cities so that we actually have a fair chance at having someone who represents our values and shared community.

Now I agree with James, his community shares more values with its neighbors than it does coastal communities and Fallbrook and it should be kept with them if at all possible. But why would he single out the community of Hillcrest, I wonder? What is it about that particular small community that he does not want to be associated with?
Fallbrook is a community that is pretty evenly divided politically. I think that we should remain in a diverse and not overtly partisan supervisorial district as well. Joining us up with East County would not do that.
And while the makers are supposedly blind to political considerations, they are certainly not blind to ethnic makeup, which often results in partisan political blocks.

Members of the public have called for a supervisorial district encompassing North County cities along the State Route 78 Corridor and northern backcountry communities of Fallbrook, Bonsall, Rainbow and Valley Center.
They also expressed interest in a district extending east-west along the U.S. Mexican border, a coastal district covering the beach communities from Coronado to Encinitas and a district encompassing the Black, immigrant and refugee communities in Lemon Grove, La Mesa and El Cajon.
Some described a desire to see Asian Pacific Islander communities grouped together in central county areas that could include Mira Mesa, Sorrento Valley and Rancho Peñasquitos, or Claremont Mesa and Kearny Mesa.

Commissioner Ramesses Surban proposed swapping some communities between a coastal district and an East County district on draft map 7.

That could entail moving Alpine and Pine Valley from the border to the East County district, and placing the working class communities of Logan Heights, Sherman Heights and Barrio Logan in the border district, where they could be part of a majority Latino voting bloc.

Now I am not an expert in these matters and I certainly don't have all the answers. But creating manipulated ethnic voting blocks doesn't seem very smart to me either, our county seems pretty well mixed at present and we have been doing pretty darn well representationally with the status quo.
I don't know what would be best for Fallbrook? One friend wrote that we must stay with the I:15 corridor and link with Vista and Escondido in order to strengthen a democratic voting block. We seem to be equally aligned with Oceanside in my way of thinking and I honestly don't have much thought about any of the political ramifications.
I just know that as much as I like the fine people in Lakeside and Santee, it makes no sense to be in a district with them. We belong with North County, in some fashion.
If you would like to submit an eComment on this issue, you can do so here.
Posted by Blue Heron at 10:44 AM