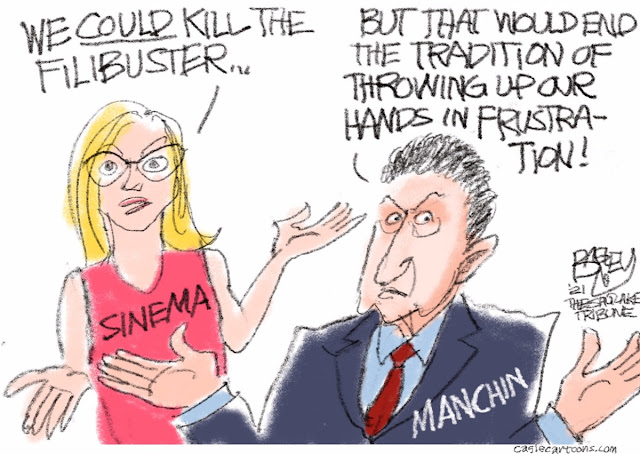 The Democrats have few tools at their disposal with the demise of Roe hanging so starkly in the air. Senate Majority Leader Charles Schumer wants to bring legislation to the floor to codify existing laws but it doesn't stand a snowball's chance in hell with West Virginia DINO Joe Manchin so recently voting against a similar bill.

There is always going back to the old way, majority rule, but both Manchin and Arizona's Kyrsten Sinema have dug their heels in against repealing the filibuster.

Sinema and Manchin voted against an effort by Senate Majority Leader Charles Schumer (D-N.Y.) and other Democratic colleagues in January to weaken the Senate’s filibuster rule to allow voting rights legislation to pass.

But this is all old news. What I would find funny if it was not so contemptible was the platinum airhead's logic for not repealing; Sinema implied in her statement the Senate’s filibuster rule is important to protecting the rights of women to make their own health decisions, including the right to an abortion.

“Protections in the Senate safeguarding against the erosion of women’s access to health care have been used half-a-dozen times in the past ten years, and are more important now than ever,” she said.

Hey Lady. I've got news for you. This is the big enchilada. All the cows are out of the barn. After this there is nothing left to protect. If you don't step up now it is over. It is Defcon 1. Are you really this stupid or are you just pretending? You think your big pharma cronies will get sore and cut off the money supply if you do the right thing for once?

And please tell me, in what way does Joe Manchin resemble a Democrat in the slightest? He is a whore for the energy lobby, a coal baron, anti environment, anti build back better, anti labor, anti pretty much everything the party has ever stood for. How would you like to share a foxhole with this guy, who takes such pleasure in delivering kidney punches to his supposed fellow dems?

Lysistrata had the answer.

Your angst is registered and it's very amusing...wanting YOUR team to vote in
lockstep without any deference to individual thought, and no deviation from
the TRUTH...

So it's amazing to learn that Ms. Sinema and Mr. Manchin still vote 97% with the
rest of the North Korean half of the Senate lead by Mr. Schumer. Every vote is
registered by the jack-booted thugs of Democrat land in unison. But when one of them
steps out of line, off with their heads. Gotta deal with it daily from Romney,
Murkowski and Collins on the other side. Ha Ha, welcome to the party, we're all just
papers in the wind.

By the way, society has a way of protecting itself...how does abortion advance civilization anyway?

I think both sides ate full of it but this is how these things get worked out. BTW Russian T-72 tanks can be had cheap if one wants to become the darling of the demonstration. Available with a pop out flag that says BOOM!