I try to be objective when it comes to Israel, at least as objective as I can. I don't agree with a lot of their policies but don't blame them for being hard asses when you get a general look around their neighborhood. Rough place. They can't exactly afford to make a major mistake.

In any case, I was quite vocal about how awful the Obama administration treated the country. Continually. You might want to go through this Obama Israel search down the blast memory lane. I wrote about Obama's double crossing of a supposed ally until I was blue in the face. You could not be more one sided. With allies like him, who needed enemies?

From sharing devastating intelligence with the Iranians to enabling the Revolutionary Guard in ways that had the potential of hurting the U.S. military, Obama did not help the cause of peace in the middle east one iota.

And the faces of his administration, people like Kerry, Harf and Psaki, were no less venal. Read this blogpost from 2015.

Who is this Marie Harf? Could she be harboring the typical State Department animus against the Israelis? Lets look at this brief introduction from her alma mater, IU. She follows her father into Political Science and writes her master's thesis on how conservative evangelical support for Israel complicates U.S. foreign policy. Sounds like her world view was inculcated at an early age, although she is still a kid, having only been born in 1981. She knew who the bad guys were, Israel and conservatives, especially evangelical conservatives, clearly one of Israel's only loyal friends today.
She joins the administration's Jen Psaki, Josh Earnest and Denis McDonough in their rather forceful and muscular approach to the Israelis and their concerns. You remember Psaki, the spokesman who refused to call the freedom loving Palestinian throwing a molotov cocktail a terrorist and Earnest, who tripped all over his dick explaining why the shooting in the Jewish deli in Paris had no theological or anti semitic connections.

I had hopes that the current administration would not be as conspicuously anti Israel, or at least try to be a bit less one sided in their approach. But I was sad to see who Biden appointed to take over from the aforementioned Psaki, one Karine Jean Pierre, fresh from Move On. You would be hard pressed to find someone more anti semitic and more anti Israel if you tried.

Israel is not a paragon of virtue and I am not a kneejerk apologist for them. But look at the country, they have arabs in Parliament and even people who are committed to their destruction. Do any of Israel's neighbors have jews in the Parliament? Or tolerate any dissent whatsoever?

This brings me to my point, finally. Last week, Democratic Congresswoman Rashida Tlaib introduced a resolution memorializing the Nakba, the establishment of Israel and the resultant Palestinian exodus.

Nakba Day is observed on May 15 by Palestinians who lament the displacement of around 700,000 Arab Palestinians who lived in the territory of British mandatory Palestine. However, the Nakba narrative paints a one-sided picture of the circumstances under which many Palestinians were expelled or fled. After the United Nations voted to partition Israel and Palestine, military coalition of Arab states declared war against the newly founded Jewish state and, along with the Palestinians, invaded Israel on May 15, 1948. Due to the war, Jews were also expelled from their land including what became known as the West Bank and East Jerusalem and the Old City. In subsequent years, around 900,000 Jews were expelled from Arab countries. 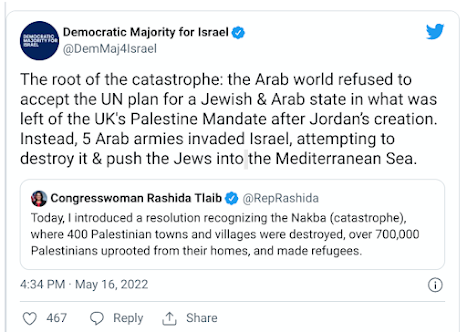 You never hear about the last part, do you?
Terribly inconvenient to the narrative and admit that rather than accepting a partition, the arabs decided to fight for the whole falafel.

For some reason squad member Ayanna Pressley decided to skip this one. Here is Tlaib's celebratory tweet:

“The Nakba is well-documented and continues to play out today,” tweeted Tlaib. “We must acknowledge that the humanity of Palestinians is being denied when folks refuse to acknowledge the war crimes and human rights violations in apartheid Israel.”

The hostility towards Israel by members of "the squad" and the progressive wing of the Democratic party is well documented. Biden looks like he is doubling down on Obama's antipathy and willing to do what it takes to screw the Israelis and Saudis and get back in with the Iranian Shia.

As a centrist liberal, I must say that if the balance of power in the party shifts to these people, I am out. As in, not voting Republican or Democrat, maybe not voting at all. I honestly believe that these squad members are committed to the destruction of Israel. I want no part of it.

Serious question: do you think they (the ‘squad’) believe there is some outcome where they feel justice would be served (as they see things) and it doesn’t tip into the next cycle of retribution and terror? I don’t think Henry Kissinger would think that was.a likely outcome.

I think they would be happy with nothing short of the destruction of Israel, honestly.

I agree. From my view it is easy to see Israel’s flaws but they can’t compare to the irrationality of Palestinian demands and positions.

Two peas in a pod. It breaks my heart. Everyone aggrieved, everyone needing comfort and home.