The Del Mar show has been pretty good, nothing like last time but there is still a day left and anything could happen. I bought two really great paintings at the show, at least I admire them very much. 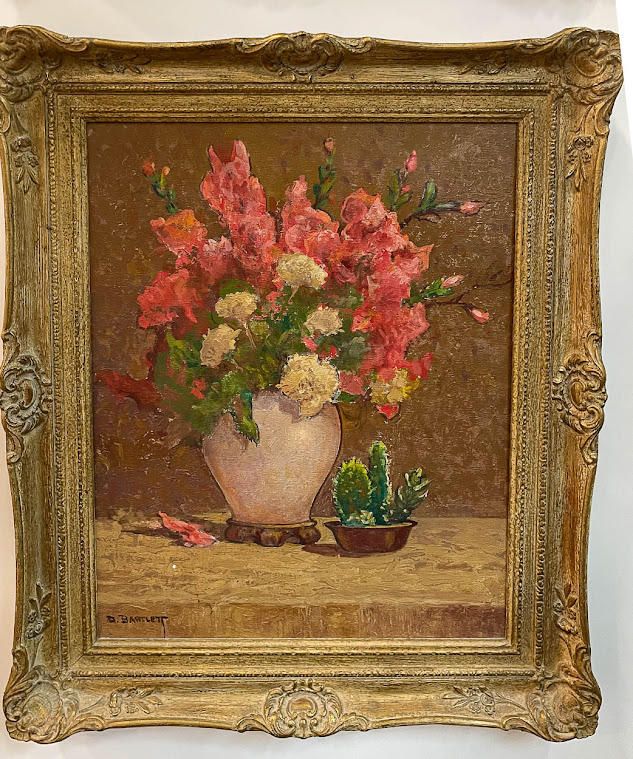 From the Fleischer Museum:

Dana Bartlett studied at the Art Students League in New York under William M. Chase and with Charles Warren Eaton. The first decade of his career was spent as a designer and commercial artist--first in Portland, Oregon for Foster and Kleiser and then in San Francisco. From the latter city he moved to Los Angeles in 1915 intending to become a landscape painter. His first exhibit in 1916 included oil paintings, watercolors and pastels as well as black and white monotypes, which he heightened with a slight tint of watercolor.

Antony Anderson, then art critic for the Los Angeles Times, found his nocturnal landscapes (for Bartlett was intrigued by the moods of nature) among his best works. Until 1930 Bartlett was a frequent exhibitor with the California Art Club and the Painters and Sculptors exhibitions. His decorative Southern California landscapes, complete with eucalyptus trees and purple mountains painted in pale pastels are almost the epitome of "Eucalyptus School" paintings.

In 1924 he traveled to Europe with the intention of making a special study of how Titian, Turner and Monticelli applied their color. Upon his return he experimented with the use of Venetian tempera as an underpainting. What resulted were a number of imaginative landscapes and still lifes painted in a high decorative fashion with brilliant, jewel-like transparent glowing colors, which are unique product in Southern California.

Bartlett opened up an art gallery in 1928 and eventually taught at Chouinard. He, like me, was once a sign painter and he gets extra points for that.

I really like this artist and have not had one of his canvasses in years. He nailed this one, the hard line on the vase and brindled background gives the floral subject so much pop and energy! Such a lovely painting for a dining or living room. It exudes class. I have to believe that it is one of the paintings with the venetian tempera underpainting with this incredibly luminous vase. 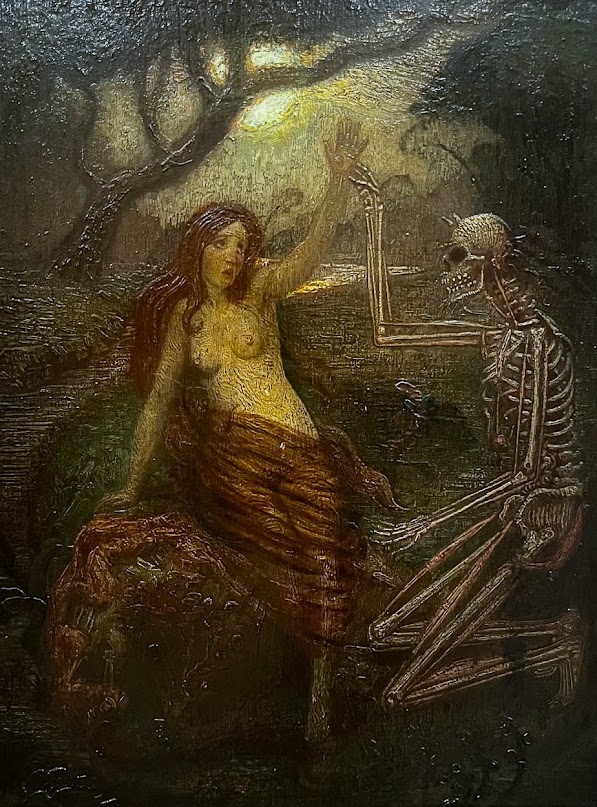 Claude Buck started to paint when he was very young and at the age of eight applied to be a copyist at the Metropolitan Museum of Art. The museum rejected him because of his age, but Buck kept asking and three years later was finally granted permission to copy the old master paintings. He was the youngest artist ever to study at the National Academy of Design, where he spent eight years creating works inspired by romantic literature. In 1917, Buck founded the Introspectives, a group of four painters who created surreal images and believed that ​“the poetry of a picture means more … than the imitation or even the representation of nature” (Eldredge, ​“Claude Buck and the Introspectives,” The Shape of the Past, 1981).

A leading member of the avant-garde Symbolism* artists movement in Chicago, Claude Buck moved there from his birth place of New York City in 1919.  He was known for his "fantastic, sometimes disturbing images with allegorical and literary themes" (Kennedy 97) drawn from writings of Edgar Allen Poe, operas by Richard Wagner, classical mythology and "New Testament" writings from the Bible.  Some of these early paintings had nude figures rendered in Classical* style to express abstract themes developed through dream-like landscapes and disregard of relative scale or relatedness between the figures.  These paintings had Luminist* elements achieved with light-toned paints worked with transparent glazes.

In the 1920s to earn money by gaining public favor and also expressing his increasing disdain for modernism, Buck did a number of hyperrealist* portraits, figures and still lifes.  These proved popular and aligned him with the opponents of abstraction and their Society for Sanity in Art* movement whose headquarters were in Chicago.

Buck taught drawing and painting at the Chicago Academy of Fine Art from 1921 to 1926, and at the Art Institute, where he took over classes of George Bellows.

In New York City before coming to Chicago, Buck had a reputation as a radical artist.  He took his first art training from his father, William R. Buck, from the time he was ages three to fourteen, and then until he was twenty-two, he studied at the National Academy of Design* where he was nicknamed "Kid Hassam" because his painting reminded viewers of that of Claude Hassam.  Buck worked as a scene painter in the theatre and at the Willet Stained Glass company, and in 1914 began portrait commissions to earn money.

In New York, he founded a group named the Introspectives, which reflected his own problems with melancholy during that period.  Members, holding their first exhibition at the Whitney Studio in 1917, were artists who expressed their personal feelings and experiences and included Raymond Jonson and Emil Armin. In this phase of his career, Buck was focused on Old World styles of Leonardo da Vinci, Ralph Blakelock and Albert Pinkham Ryder.  In 1929, the Arts Council of New York voted him one of the top one-hundred painters in the United States. 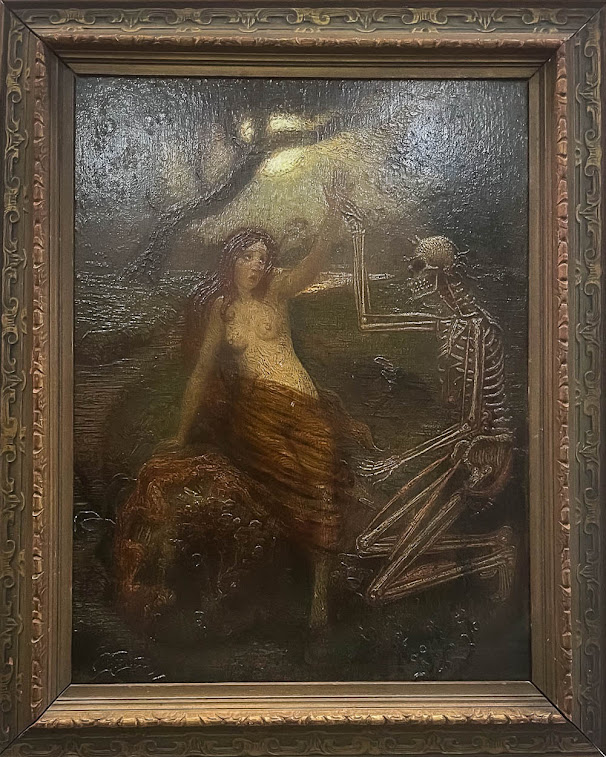 I call this 14 x 11" oil on board Death's welcome. I recognize that this sort of subject matter is not for everybody but as both a deadhead and cancer survivor it resonates with me.

I have looked at quite a few of his allegorical works and to me, this is by far the most powerful I have ever seen and somewhat reminiscent of K. Kollwitz's later work.

My father's first studio out of art school in the late 1940s was in a building that was right next door to a little old man who came to work every day in a coat and tie and painted, according to my father's modernist eye, the same painting every day.

The painter was Dana Bartlett.