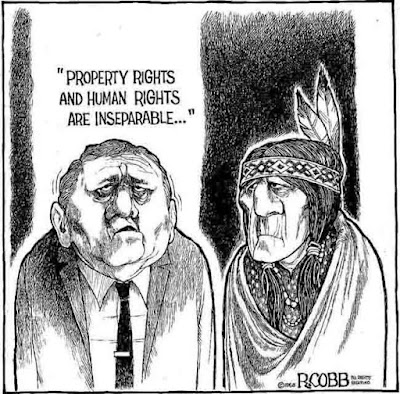 In 1832, the Supreme Court held the United States must treat Indian tribes as sovereign nations.

“Indian nations had always been considered as distinct, independent political communities, retaining their original natural rights, as the undisputed possessors of the soil ... The very term nation so generally applied to them, means ‘a people distinct from others.’” —U.S. Supreme Court Chief Justice John Marshall, Worcester v. Georgia, 31 U.S. (6 Pet.) 515, 561 (1832).

This has been the law of our land for 190 years or so. Until it ran into the latest Supreme Court anyway.

Justice Kavanaugh wrote the majority opinion, joined by all of the normal conservative cronies, less Gorsuch.

Justice Kavanaugh's majority decision was based in large part on practicalities. Indian country is part of the state, not separate from the state, he said, and therefore, unless Congress says otherwise, a state has jurisdiction over all of its territory, including Indian territory.

This reasoning flies in the face of two hundred years of legal doctrine and a concept of sovereignty more apt to be held by Vladimir Putin. But it is not really too surprising in the face of everything else.

Not surprising at all… those guys (and one gal) should be called The Wrecking Crew!

My friend Ron Cobb always hit the nail on the head. ~ Diane O

I didn't know him but I sure loved him.