“This is how the White House has always feared this would end. It vindicates their skepticism toward Manchin over the past six months, but it also marks the death of their climate agenda and ambitions to transform the country,” said one outside White House adviser, speaking on the condition of anonymity to reflect conversations with administration officials.

If anybody deserves the lifetime Lucy Van Pelt award for pulling back the football it is Joe Manchin. Guy is infuriating. Not because he takes a centrist position, I admire that. It is because he makes deals and then backs out of his own deals, time and time again, making everybody else look stupid, hanging around with their shvantzes in their hand. I hate liars and people that continually break their word.

Over the past year, Mr. Manchin has taken more money from the oil and gas industry than any other member of Congress — including every Republican — according to federal filings. A Times investigation found that he also personally profited from coal, making roughly $5 million between 2010 and 2020 — about three times his Senate salary. Coal has made Mr. Manchin a millionaire, even as it has poisoned the air his own constituents in West Virginia breathe.

The man is a diva who loves holding all the cards but everybody knows at this point that he can not be trusted. A Republican in drag, completely beholden to the big energy interests, a man who along with Kyrsten Sinema, has done everything he can to torpedo his party's legislative agenda. Joe Manchin, the deal killer.
Good article at TPM. 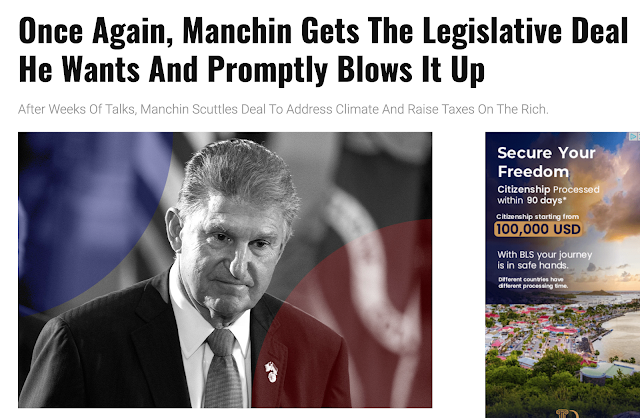 Guy's act is getting awfully tired. Can you imagine having a man like this in your foxhole? The ultimate prima donna. Self absorbed and craving constant attention, always willing to help the opposing party but never offering anything to his ostensible comrades.
What an awful joke you are, Joe Manchin. If you want to know why Biden can not get any of his legislative goals enacted, you need look no further. All roads unfortunately lead through Joe Manchin and he is going to milk that for all it is worth, before he scuttles it in the end anyway. He is not a team player, in fact he only can carry water for the opposition. With friends like Joe Manchin, who needs enemies?
Posted by Blue Heron at 4:28 PM