Mere hours after a white supremacist massacred 11 worshippers in a Pittsburgh synagogue in October 2018, Andrew Torba, CEO and founder of the social media site Gab, gloated about all the web traffic his platform was receiving.

“We have been getting 1 million hits an hour all day,” Torba wrote via Gab’s Twitter account. Gab had drawn national scrutiny immediately after the bloodshed in Pittsburgh because the killer, Robert Bowers, was a prolific and verified user of the site. He’d posted neo-Nazi propaganda and calls for violence against Jewish people, whom he called the “children of Satan.

“We’re taking back this country for the glory of God and there’s absolutely nothing you can do to stop us,” Torba wrote. “We are playing the long game and unlike most of you, we have children and thus the future belongs to us because we are raising them up with a Biblical worldview.”

“Keep writing,” Torba continued. “You’re only making us stronger and galvanizing support from the base. After six years you guys still don’t get it and it’s hilarious. Repent now and accept Jesus Christ into your heart. Every knee will bow, yours included.” 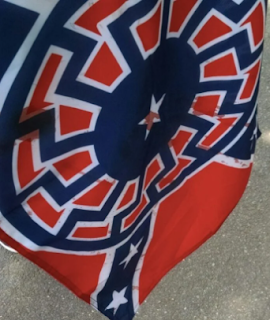 All House Republicans vote against bill probing Neo Nazis in the military and police.

The stark divide between Democrat and Republican support for the amendment is a reminder of how the genuine national security problem of white supremacist infiltration of government agencies has instead been turned into a partisan football.

“We just voted to combat neo-Nazis in our military and every single Republican voted no,” tweeted New Jersey Democratic Rep. Bill Pascrell Jr.

What more to say.

At least we are alert tp these dangers maybe that will tip the balance. ~ Diane O

Ahem, last time I checked, ah, the Jewish race were never people of color...ergo,
that puts them in that vast melting pot of that dastardly category known as 'whitey'.
So a whitey supremicist gets pissed off at non-whiteys and shoots up a synagogue??

If we are going to pigeon-hole the entire human race so we can address perceived racism and we can more effortlessly race hustle (i.e. accrue much more grant money), we can't be throwing around labels that don't apply.

[get my last diatribe now on Amazon]