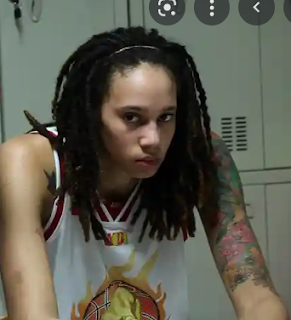 Phoenix Mercury Basketball player Brittney Griner has been in a Russian jail for over 135 days for alleged possession of cannabis hash oil vapes, a crime with a possible ten year penalty in Russia. They were found in her suitcase.

Her supporters are mad at Joe Biden and the state department for not getting her released sooner. They don't understand why a deal has not been made?

Of course it's racial. Or perhaps because she is gay?

‘‘We have a woman who represents everything that we’re supposed to stand for that’s sitting in a prison,’’ Sky general manager/coach James Wade said. ‘‘And we’re just making posts. She’s played for our country and brought our country glory, and this is how we’re treating her. It’s disgusting.’’

Really? If it was Tom Brady, he would be free?

The Russians are son of a bitches. They have murdered more than forty seven thousand  innocent people in a neighboring country to date. The Russians view the conflict as a proxy war against America, who they view as their enemy. Of course they are going to use her as a bargaining chip. Russia wants to trade her for a notorious arms dealer we hold in custody, Victor Bout.

If Brittney Griner and her supporters want to blame anybody and be mad at anybody, it should be at Brittney Griner. Because she thought that her celebrity would let her skate and she thought she could do anything she wanted to in an authoritarian country or was too chill and/or ignorant to bother to consider that laws might be not quite as lax over there as they are here in the good ol' U.S. of A.. That is not the way it works.

In fact she is lucky she didn't get caught in a place like Malaysia or Saudi Arabia or Iran where she would have possibly just been put to death for her infraction. Malaysian legislation provides for a mandatory death penalty for convicted drug traffickers. If you are arrested in possession of 15 grams (1/2 ounce) of heroin or 200 grams (seven ounces) of marijuana, you will be presumed by law to be trafficking in drugs.

Amnesty International reports that as of February 2022, Malaysia had 1,341 people on its death row, with 905 having been condemned under mandatory death sentences for drug trafficking.

If you go to a foreign country, think about their laws there. They might be different. And they might not care that you are a basketball star here, black, white, brown or yellow, gay or straight. Read the newspaper, there is a war going on and innocent people are dying. Be a little smarter. Tough for me to blame Biden for her troubles. Hope she gets out but it might take a while, honestly. And ultimately, it will be nobody's fault but hers.

The whole thing reminds me of a story from the Bill Graham book. David Crosby, who comes across as an elitist idiot, was talking about Altamont and he said something to the effect of, "Can you imagine if a musician had been killed there?" Oh, the horror, as if a concert goer's demise wasn't bad enough. Celebrities can be such dim witted assholes.

Sports figures seem to operate in a different or should I say, indifferent atmosphere. Hence the recent exodus to the Saudi golf tour.

“I understand the topics you’re trying to bring up, and they’re horrible events, but I’m here to play golf. That’s my deal,” said Pat Perez, a three-time PGA Tour winner who also spoke against LIV Golf before changing his mind. “I’ve got an opportunity to play golf, and that’s it.”

Always about the money, baby.

You seem to assume she is guilty. Are ‘get caught’ and ‘framed’ the same to you when you say she is lucky it wasn’t in Malaysia or Saudi?

Well yes,I assume she is guilty. Because I have not heard one person, including the accused and her wife, say she was framed and the evidence planted.Have you?

Only a dope smoking idiot would go from the free world to Putin's Russia.