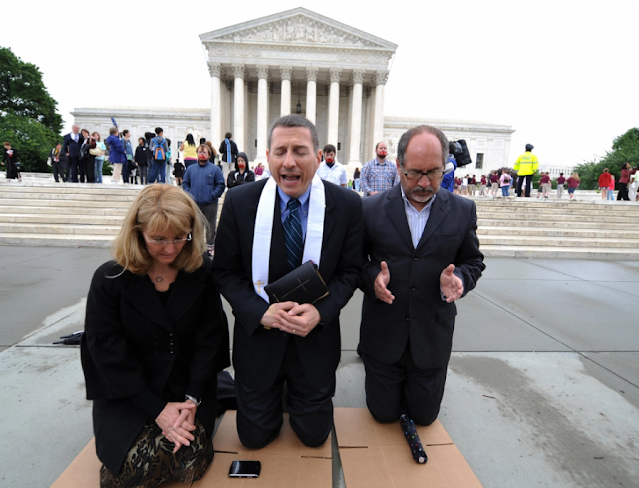 Liberty Counsel is an evangelical organization that has strenuously fought to curtail abortion rights. The group has brought legal cases to the Supreme Court and specifically submitted a friend-of-the-court brief in Dobbs v. Jackson Women's Health, which officially ended the federal right to abortion last month.

One of its leaders, Peggy Nienaber, the executive director of Liberty Counsel's D.C. ministry, was caught on a hot mic recently bragging that she regularly prays with members of the Supreme Court in their offices. Rolling Stone Magazine received a copy of the tape. How is this not a conflict of interest? Of course, our SCOTUS is bound by no code of ethics, hence one of the Justices' wives was found openly plotting to overthrow the last election.

On a live stream, Nienaber was directly asked whether she prays with any members of the court. "I do," she responded, seemingly unaware that the stream was being recorded."They will pray with us, those that like us to pray with them."She later added that her comments were "totally off the record."

Mat Staver, Liberty Counsel's founder, vehemently denied Nienaber's claims, telling Rolling Stone that there is "no way" the group has prayed with any justices.

"She has prayer meetings for them, not with them," he claimed.

However, the ministry's founder, Rob Schenck, who originally launched the group under the name of Faith and Action in the Nation's Capital, affirmed that the group has hosted prayer ceremonies with members of the Supreme Court since the late '90s. Schenk told Rolling Stone that the group built personal relationships with Justices Samuel Alito, Clarence Thomas, and the late Antonin Scalia.

Why does it feel like somebody stacked the deck again? Is it too much to hope for a Supreme Court that listens, is receptive and responsive to all Americans, not just a holy few?

Law professor Louis Virelli puts none too fine a point on the practice, noting, “Praying with a group that filed an amicus brief with a court is a problem.”

More on the subject at The Cut:

Nienaber, meanwhile, has been involved since about 2005. And though she insisted to Rolling Stone that she does “not socialize with the justices,” her social-media footprint suggests otherwise. She has reportedly called Thomas a “friend” and described him “passing by our ministry center to attend church and always taking time to say hello.” She received an invitation to Brett Kavanaugh’s swearing-in. She has been photographed with both men as well as with Senator Lindsey Graham and former vice-president Mike Pence. The Liberty Counsel did not account for that apparent discrepancy in its statement, but both Staver and Nienaber have pointed to COVID restrictions in arguing against Rolling Stone’s allegations. “Since early 2020, access to the Supreme Court has been restricted due to COVID,” Nienaber told the magazine. “It has been many years since I prayed with a Justice.”

“It should be obvious that since early 2020, the Supreme Court has been on lockdown due to COVID,” Staver said in his statement to the Cut. “There is no way anyone could have entered the Court to pray with the Justices or the staff over the past 2½ years.”

But Nienaber’s claims that she has never socialized with justices contrast with her own posts on social media and with her admission that she has in fact prayed with these men. 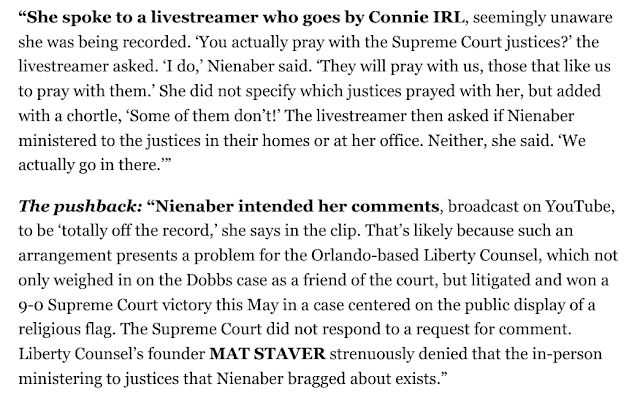 I believe in the outstanding work of Liberty Council.
Little girls and women can still get all the abortions (by the 100's) in the states that allow. My federal taxes won't be supporting them.

Ever hear of the Hatch act? Your federal dollars don't support them. Rich (white) girls will have no problem traveling to blue states, poor women just might.