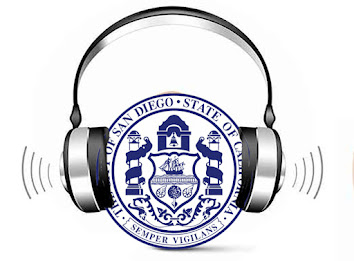 San Diego is adopting a new surveillance ordinance. The ramifications are truly frightening. There was an excellent opinion piece in the Union Tribune the other day; Amendments to San Diego surveillance will harm residents. Here's how.

The surveillance technology oversight ordinance came from a series of mistakes made by the city that put our privacy, civil liberties and budgets in danger. In 2016, the city adopted a 3,000 camera-and-microphone smart streetlight system unaware that it had signed over a copy of all of our data to a private company. The new ordinance would make transparency and improved technology deployment part of regular city processes through community and expert input and City Council oversight.

But there are many ways these amendments directly harm San Diegans.

Flawed surveillance data can throw families’ lives into disarray. In Chicago, Immigration and Customs Enforcement snatched 31-year-old Wilmer Catalan-Ramirez from his family home without a warrant, locking him up for nine months because he’d been erroneously listed in gang databases. Because Chicago is a sanctuary city, ICE should not have known the erroneous gang affiliation. Bloomberg reported surveillance tech as “a likely link.” Chicago, like San Diego, uses an expensive software called Palantir that integrates information from different databases, with no oversight over whether the data is accurate.

And that's not all.

In addition to using Palantir without openly discussing it, the San Diego Police Department has already shared San Diegans’ locations with Border Patrol potentially in violation of the California Values Act (Senate Bill 54). The department did this using license plate tracking technology sold by a private company. Such data can be used to create an intimate profile of someone’s movements, from home and work to school, places of worship, doctors’ offices and grocery stores. There is no way to ensure that the third party does not share the data further without oversight over those contracts and agreements. A task force loophole means we may never have a say in the use of such technologies where we live.

And then there's this:

San Diego’s smart streetlights can already be marshaled to target abortion seekers. At First Avenue and Grape Street in Downtown, a smart streetlight films all day outside of a Planned Parenthood location. The data it gathers belongs to Ubicquia, a tech company in Florida, that has refused to stop the streetlight filming despite the city’s requests.

We do not know how this data is being shared but we know it could be used — whether by out-of-state law enforcement, the federal government or private buyers — to identify and target people. If this technology is ever again approved for use, it could then subsequently go on to be used by police working on federal task forces, but with maximum secrecy guaranteed by this new exemption.

The ordinance passed yesterday but not without significant opposition by a public that was concerned that it opened the door for political persecution and abuse. By the way, Ubicquia might actually be from Phoenix. Short for ubiquitous, as in everywhere. CEO from Florida.

The version of the ordinance approved last month by a narrow 5-4 vote included an exemption for cops who serve on federal task forces, generating hours of public discussion, almost all of it in opposition. Many of those same voices reiterated their opposition on Monday.

They argued that the federal task force exemption undermined the transparency goals of the ordinance and put, as three argued in the Union-Tribune last week, immigrants and people traveling here for reproductive health care at risk. At the meeting, several pointed to the FBI’s history of using surveillance to disrupt Black and Brown political groups, and others shared stories of how they or their Muslim families were harassed after 9/11.

The use of privacy boards has its detractors. Good article here at Cities-today.com.

Dave Maass, director of investigations at the Electronic Frontier Foundation and lead on the organization’s Atlas of Surveillance project, comments: “An oversight board alone is not really sufficient for true community control over police surveillance. Any proposal for a board should be coupled with a robust ordinance that requires police to present a privacy impact assessment and policy proposal to a city council, and then those elected officials should have the final say on whether that technology is approved. Police should also be required to come back annually with a report on how the technology was used – and misused.”

I have conservative friends that ask me how I can trust our government? I must admit, there are times like this when I don't. Law enforcement uses every tool in its arsenal or toybox, legal or not and constituional rights be damned. Witness the blanket license plate detection systems, all undertaken without warrant or probable cause. See Blue Heron Blast; Get a warrant. Or the use of stingray equipment and the warrantless sucking up of innocent people's data with these cell site simulators. See Blue Heron Blast; Of course we're listening.

The Trump administration’s immigration enforcers used mobile location data to track people’s movements on a larger scale than previously known, according to documents that raise new questions about federal agencies’ efforts to get around restrictions on warrantless searches.

The data, harvested from apps on hundreds of millions of phones, allowed the Department of Homeland Security to obtain data on more than 336,000 location data points across North America, the documents show. Those data points may reference only a small portion of the information that CBP has obtained.These data points came from all over the continent, including in major cities like Los Angeles, New York, Chicago, Denver, Toronto and Mexico City. This location data use continued into the Biden administration, as Customs and Border Protection renewed a contract for $20,000 that ended in September 2021.In just three days in 2018, the documents show that the CBP collected data from more than 113,000 locations from phones in the Southwestern United States — equivalent to more than 26 data points per minute — without obtaining a warrant.

The documents highlight the massive scale of location data that government agencies including CBP and ICE received, and how the agencies sought to take advantage of the mobile advertising industry’s treasure trove of data.

“It was definitely a shocking amount,” said Shreya Tewari, the Brennan fellow for the ACLU’s Speech, Privacy and Technology Project. “It was a really detailed picture of how they can zero in on not only a specific geographic area, but also a time period, and how much they’re collecting and how quickly.”

DHS did not immediately respond to a request for comment.

Of course they didn't.

Bless you for bringing this to my attention. Horrifying indeed...~Diane O

Last I heard, palantir was a CIA organization