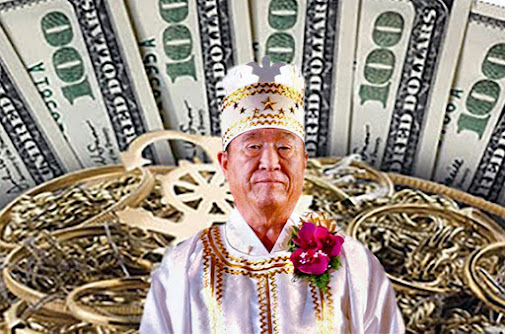 Interesting article over at Yahoo, at least to me.
The Abe assassin story gets a little more understandable.

The late Prime Minister had ties to the Unification Church aka Moonies.

After his father's suicide, the assassin's mom had bankrupted the family making religious donations to the cult. Basically ruined his life.

According to the article, he was initially going to go after church leaders but nailed Abe first.

Not necessarily justified but I totally get it. I wrestled with similar thoughts when the man stole 13 million dollars from my father. Wished him a slow torturous death on many occasions.

The Moonies are one of the most venal of cults. Unfortunately this sort of thing goes on all the time, in various religions and cults around the world. You want to scam people this is a pretty easy way to grab the lucre.

Yamagami reportedly told police that he had targeted the former prime minister due to Abe’s affiliation with the Unification Church, which Yamagami blamed for bankrupting his mother due to its forceful donating practices.

On Friday, the uncle, who is the 77-year-old older brother of Yamagami’s father, shared that Yamagami’s mother first joined the church in 1991 after her husband’s suicide in 1984.

She made multiple donations to the religious group throughout her time as a devoted member, including proceeds from the sale of the family’s property and house.

Despite becoming bankrupt in 2002, she continued giving to the church, albeit in smaller amounts, under the principle of “world peace and unification.”

“I believe she was a very important follower of the church. She was under mind control,” the uncle said.

He added that the family was thrown into poverty and Yamagami was forced to give up college due to financial ruin.

Someone needs to write a scholarly treaties on the role of silly hats in religion.