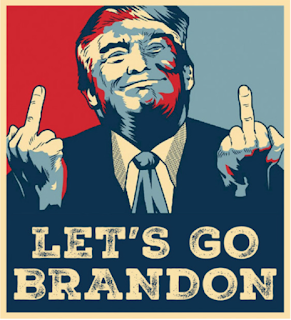 The two heavy set women sat right behind us on the plane to Denver. They both had straight shoulder length hair, with no discernible style and honest to god, they would not shut up for two and a half hours.

They talked about their children, their ministry, the adopted kids from Africa and their ultra right wing politics. Anti mask, anti vax. Lot's of digs at Sleepy Joe.

Stupidity hung in the air and wafted heavily above the seats like the pallid smell of formaldehyde in a dingy morgue. Dumb was a badge of honor.

We are all entitled to our opinion of course, god knows I have mine but these two were talking so loud and obnoxiously that the whole plane was soon privy to their mental deficiency.

They were impossible to tune out and I think they took great joy at irritating everyone within listening distance, which was pretty much the whole cabin.

"Did you bring a mask?" "No, did you?" "I walked into the grocery the other day and they asked me for one and I just said, I'll shop somewhere else, thank you! Showed them!"

I'm, like, please, you did them a favor, somebody give me ear plugs and a sedative, stat. But it only got worse.

"Everybody knows you get covid through your eyes anyway. Might as well be wearing goggles," she exclaimed. "No kidding, like we're all not going to get it eventually..." "Hahahahahahahaha."

It went on and on... I was tempted to politely ask them to stfu and tell them that no, not all of us got it, some of used sensible precautions and watched out for ourselves and our neighbors but thought, do not engage, Robert, you will only make it worse... I heard about their kids, who had evidently come back to Jesus and stopped smoking weed, their pastor, the metal cargo containers they were turning into prepper shelters for the coming end times, just way more about their lives than I ever wanted to, in the loudest of all possible voices.

I hate how religion and politics is so inextricably mixed these days, like the blessed savior has his own favorite party now and the religious war is just about to start for real but that is pretty much where we are. Later I saw them at the baggage check and noticed the in your face Let's go Brandon t-shirt one of them was wearing. Figured.

We were on the shuttle to baggage claim sitting next to a young man with his mom on his way to Hillsdale College in Michigan, which is at the forefront of the new right wing evangelical vanguard. His pretty mother incongruently had a nose stud. I wanted to say something to him about keeping an open mind but he was such a sweet kid. We all learn what we learn in time. I shut up.

We live in two different worlds, never the twain shall meet...