Topical morning to you 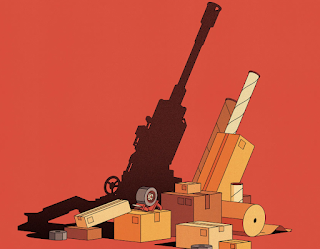 If you are interested in the most in depth article I have seen on the nuts and bolts of the Ukraine War, read Joshua Yaffa's Arming Ukraine in the latest New Yorker. Fascinating read.

From Nick Canepa - San Diego U-T: Adidas, which shod Hitler Youth, has dumped Kanye West following his anti-Semitic remarks. But there are more companies lining up to use his name, says his irate publicist, Joseph Goebbels.

Elon Musk gaslights Pelosi, tweets that the altercation with the attacker might have resulted from a gay liaison, as reported by wackjob Santa Monica Observer.

The Santa Monica Observer has also published other fake stories that falsely reported that former Secretary Clinton died in the September 11, 2001 attacks and had been using a body double since then, and that Ye, the rapper formerly known as Kanye West, was appointed to a non-existent position in the Department of the Interior under former President Donald Trump.

Now, why would a bipolar megalomaniac owner of Twitter be a bad thing? The same guy, you remember, who made the unfounded accusation that the thai cave rescuers were pedophiles... 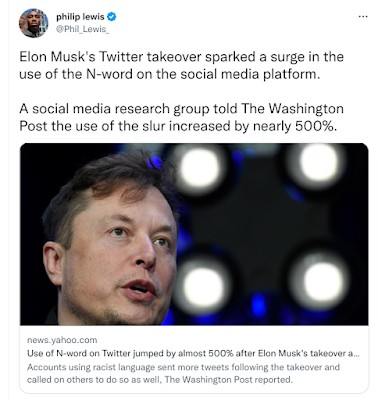 The recent Los Angeles City Council recording was an example of the worst kind of racist identity politics. But rather than deal with the implications of their racism, they want to find out how they got caught? Latino denigration of poor indigenous natives like the Oaxaquenos is unfortunately centuries old.

I got a flu shot the other day, first time in over thirty years for me. With all the respiratory disease out there, no point taking a chance this year. If you have not had one, you might consider it. 55 year old man with no underlying conditions died in the hospital here in San Diego last week of the flu.

As messed up as it is, the Twitter junk does resemble the press in the late colonial era. The founders routinely hired professional slanderers to attack one another and appealing to the mob was not at all unusual. Beer wagons outside polling places appeared right after independence.

The commoners were often "nonconformist". George Washington had to lead an expedition to suppress those freedom loving back woods folk who just wouldn't pay the whiskey tax.

I try to keep facts like this in mind while pulling my hair out.

Even though we advanced primates can sort of agree on consensual reality, all that goes to hell when the emotions get riled up which is why politicians have been riling up the populace since the beginning. Not sure if a riled up primate full of beer and carrying an AR-15 is still and advanced primate. But then I am not so sure the Woke crew is all that advanced either.

I do think we have been fooling ourselves about what an advanced society we have had how great the USA is at democracy. Could it be that we just another democracy enjoying all the weaknesses that we built in to ourselves?

Don't know--gives me a headache.

Kanye went to Skechers to seek some relief from his woes or some such thing… apparently,he did not research who the owners of the company are… their name is Greenberg….