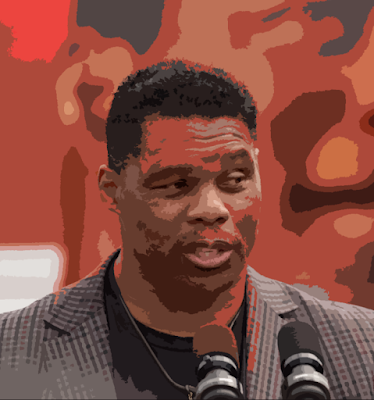 The Herschel Walker story is pretty amazing. How the GOP could support a candidate with a history of abusing his wives and kids, as well as having serious mental health issues is frankly beyond me.
And now this.

After denying that he knew a woman who said that he fathered her child and then offered conclusive proof that he paid for her abortion, word comes out that he also fathered a different child with her. His own son calls him a liar and a hypocrite.

But hey, no worries. You knew it was coming. Straight from the teary eyes of Jimmy Swaggart, here comes the Jesus, get out of jail free card.

It’s clear that Walker has been milking this whole born-again Christian thing for all it’s worth because there’s nothing evangelical voters and donors love more than a redemption story (I used to be one). But they also hate abortion about as much as they love Christ’s forgiveness, so Walker has been having to walk a pretty narrow line since these allegations surfaced.

While outright denying the claims that he paid for an ex-girlfriend to have an abortion, Walker has also jumped at every opportunity to talk about his past mental health struggles and push the message that he’s been “saved by grace” and redeemed from past mistakes.

Is it really that easy? His supposedly anti-abortion defenders in the party don't really even care about his lies, hypocrisy and shoddy behavior. They are only interested in power. One even referred to the mother of his child as a skank.

In a clip flagged by @PatriotTakes, Loesch told her followers that winning back control of the Senate is the only thing that matters and that other moral considerations can be cast aside.

"I don't care if Herschel Walker paid to abort endangered baby eagles," she said. "I want control of the Senate!"

Loesch went on to dismiss the significance of the Walker abortion claims in even starker terms.

"If the Daily Beast story is true, you're telling me Walker used his money to reportedly pay some skank for an abortion, and [Sen. Raphael Warnock] wants to use all of our moneys to pay a whole bunch of skanks for abortions," she said. "So, it doesn't change anything for me!"

Wonderful Christian values. Shut up, the man has been saved and we need the win. Isn't there supposed to be genuine contrition before you get to the redemption part?

We are living in an alternate universe, where one party is so power hungry they would put a mentally and morally deficient person in the Senate, not unlike Trump.

Or Oz, the snake oil salesman and carpetbagger. WTF!

This is an easy test of the American people, fool us once, fool us twice and then again, what a sad state in the country I love, that was so good to me and my immigrant family. I’m truly a believer in the promise of this country but not it’s people. Not anymore. Sad.

I feel ya. It’s watching the fall of civilization and Democracy all at the same time.

Well politics is so tribal now that personal misconduct is less important than what SIDE a candidate is on. Same thing applies to Trump. He is a bastard but he’s OUR bastard. It is how it is these days.