For some reason I have been on a real noodle kick lately. Thai, Vietnamese, Italian, Japanese, American, Chinese, it really doesn't matter, as long as there are noodles.

Leslie made a great pasta dish at home the other night and instead of spaghetti used bucatini, my current favorite. Very chewy. I also like acini di pepe, tiny pasta ends that mimic a grain.

Noodles are so comforting and like dumplings, featured in almost every culture's cuisine. I like them all, but partial to udon, soba and chow fun, ramen and chow mein, not so much. 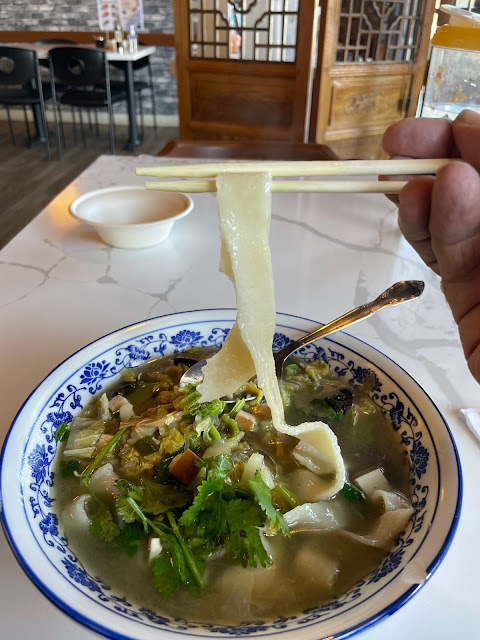 One of my favorite noodle joints is Shan Xi Magic Kitchen on Convoy.

I had to pick up a San Diego estate last week and had the cumin lamb hand ripped noodle while I was in Clairemont Mesa.

This noodle is about an inch and a half wide and very firm and succulent. A real slurper. 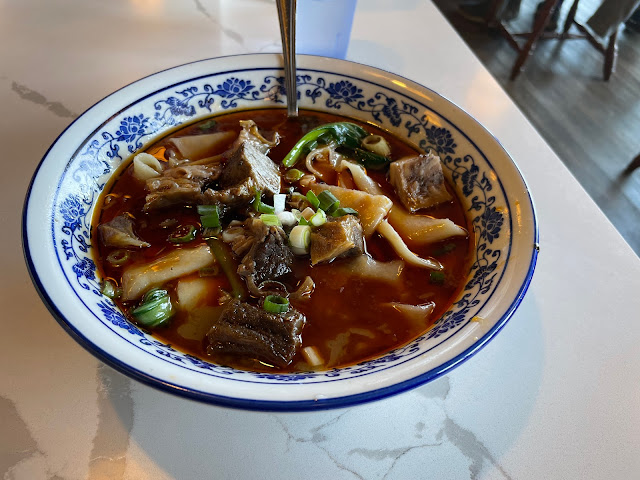 Later in the week I returned for the spicy beef brisket noodle bowl.

They have over forty noodle dishes at Shan Xi but they are principally either hand ripped like these two or hand pulled, the biang biang noodle.

But then again they also list the cold skin noodle, fried noodle, oriental noodle and the hand made noodle so maybe I just haven't gotten far enough down the menu.

The first time I went there I had the biang biang noodle and beef, that is a more traditional looking cylindrical noodle. Very ropey, so much better than a commercial noodle! Firm and chewey.

It is a very tough call to figure out what to order there, eventually I would like to sample the entire menu. A Mexican couple was asking about the fried pork skin noodle dish, like a chicharrone.

Wednesday Steve and I had lunch in Vista at Kung Fu Noodle and had to have their hand made dan dan noodle with peanut sauce as well as xlb and shrimp fried rice. Outstanding meal.

Tomorrow Leslie and I are going to Pala Casino's Noodles Restaurant to try their duck and noodle bowl as well as the barbecued pork bowl. I had it on my own recently and felt guilty it was so good. I want to share my gustatory experience with my wife.  Pala used to have a much larger menu, it has been consolidated somewhat but what they offer is great.

Tomorrow is my noodle penance.

You are a real culinary expert IMO. May I ask what you consider the best place to get a filet mignon in this area? I occasionally just have to have some blood-red piece of tender beef but haven't searched for any since I moved here for my retirement. Thanks. ~Diane O

That is a tough one but honestly if I were you, I would go to Tip Top Meats in Carlsbad, pick out a steak in the display and have them cook it for you on the spot. Tip Top is a treasure.

Thank you very much! ~ Diane O