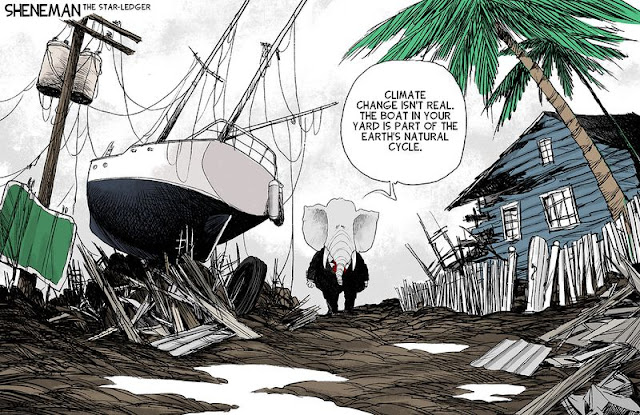 I have twelve minutes before I drive home, might as well wade into politics. Let's give our big fat piece of crap hypocrite awards to Senator Rick Scott, Senator Marco Rubio and then Congressman, now Governor, Ron De Santis, for once voting against Hurricane Sandy relief and now having their porcine little cloven hands out looking for some federal grease.

Now that a hurricane affects them, Ian, the shoe is on the other foot, they are pigs at the trough and there is no time for politics. Very convenient. Always easier to be an asshole and a tight assed but oh so fiscally responsible virtue signaler when it affects the other guy. DeSantis Spokesperson Bryan Griffin said, “We are completely focused on hurricane response. As the governor said earlier, we have no time for politics or pettiness.” Right. Since when?

Hurricane Sandy made landfall Oct. 29, 2012, and devastated portions of the East Coast, including New York and New Jersey. On Dec. 7, 2012, Obama requested $60.4 billion in emergency appropriations. Three weeks later, the Democratic-led Senate voted 62-32 to approve it, with Rubio voting against. Twelve Republicans joined the Democrats in voting for the bill. Republicans then countered with a stripped-down alternative of $24 billion, which Rubio supported but which failed on a party-line vote. The second part of the disaster relief, a bill for $50.5 billion, passed the Senate on Jan. 28, 2013, 62-36 largely along party lines. Rubio voted against the bill and DeSantis voted against the measure that passed in the House. Obama signed it into law.

Rubio said he voted against the larger bill because it contained “unrelated pork.” He specifically mentioned fixing a roof on a museum in Washington D.C.. What he failed to mention was that the roof was heavily damaged in the hurricane. Bill seemed pretty darn clean when you look at it. It fixed weather related disasters across the country.

DeSantis, a newly sworn-in congressman, was one of 67 House Republicans who voted against the bill. DeSantis said he sympathized with victims and that those with flood insurance should have their claims paid. But he said that “allowing the program to increase its debt by another $9.7 billion with no plan to offset the spending with cuts elsewhere is not fiscally responsible.” 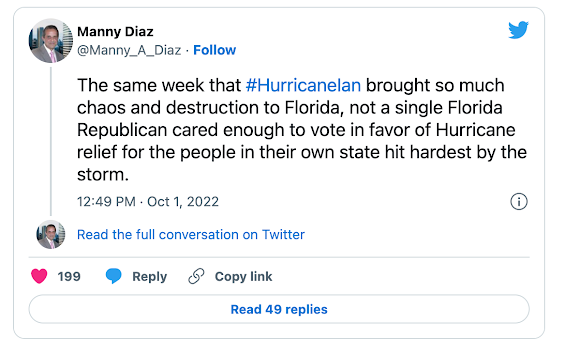 Florida's senators, Rubio and Rick Scott, didn't vote in favor of a stopgap spending bill on Thursday that included an additional $18.8 billion allocated to FEMA spending for Hurricane Ian and other natural disasters, HuffPost reported. The bill passed, without the help of 25 Republican 'No' votes.

CNN's Dana Bash on Sunday brought up how Rubio voted against Hurricane Sandy relief: "Why should other senators vote for relief for your state when you didn't vote for a package for theirs?"

"Well Dana, it goes like this. Sandy helped the blue states of New York, Connecticut and New Jersey. Ian is a red state hurricane. That makes everything different. Because as you well know, I am an unethical, hypocritical swine. Of course I am lying, my lips are moving."

Was Hurricane Sandy aid really full of pork? Read this archived article, you be the judge.

So now we have the spectacle of the Florida bozos asking for federal aid that they just voted against. The hubris and stench is hard to miss. A part of me wants to say karma is a real bitch, as you sow, so shall you reap but there are too many good people in Florida that don't deserve to suffer because of the craven ineptitude of their leaders. But please tell me, why do they elect such incredible assholes? And why should we bail them out when they showed the rest of the country the back of their hand, repeatedly? You want to deny climate change and then build in the swamp and the rest of the country is supposed to bail you out repeatedly? Bite me, Florida.

By all means send federal aid for disaster relief, and do so unstintingly, without regard for whether the state is run by Rs or Ds. But why send any of it, even one penny, to be administered by state govt in states run by people who don't believe in the socialism of disaster relief? Haven't they told us they don't believe in the principle of disaster relief, the govt using money taxed from us all to help those in need? How can you expect them to handle any money for that socialist purpose with honesty and efficiency?

Of course, if that is to be our party's plan for disaster relief, we can't hammer out the details and then set up the federal agency assets needed to cut state govt out of disaster relief, all on the fly the day after a natural disaster. It has to be already set up and ready to go before the disaster. Good luck getting our side to commit to any plan, though, especially if that plan would require ending the filibuster. You can't get 50 D senators to weigh the relative merit of any plan of governance, even one that will make our disaster relief more effective and no longer weighed down with Florida corruption, against the hallucinated benefits of the filibuster, and expect them to make the right choice.