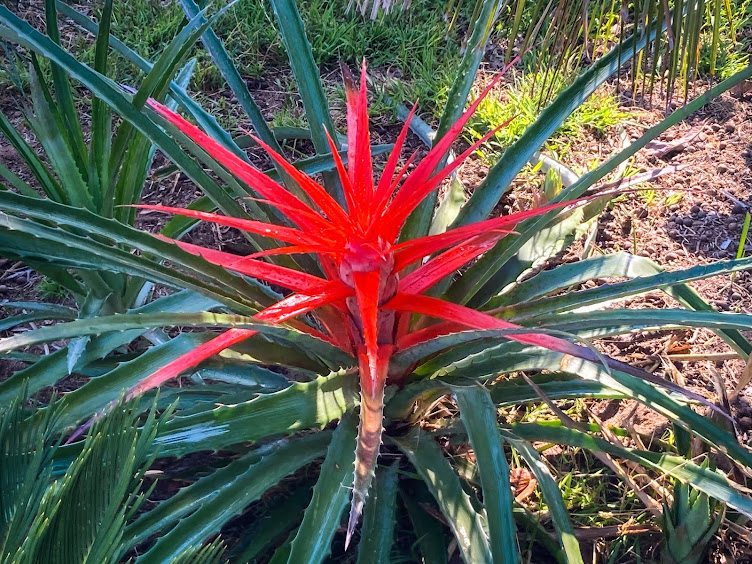 The flower of my bromelia balensae is evolving very quickly.
What once were merely spectacular scarlet pink leaf forms are now morphing into a serious flower spike.
I took a couple pictures with my cell phone this morning. 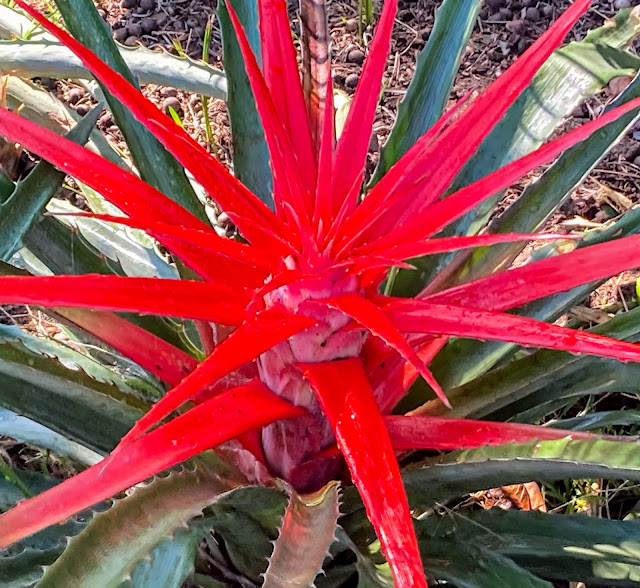 It is in shadow but you get the general idea. Brilliant flower.

Ace botanist and fellow ex Del Cerran Jeff Chemnick identified the plant for me. Jeff sells all manner of wonderful flora out of his incredible Santa Barbara ranch, Aloes in Wonderland, a private botanical garden.

I wrote him a letter last week asking him if the presence of the flower would make the mother plant caput and got this rather terse and scientific reply; …all terminal inflorescences in bromeliaceae are monocarpic.

After quickly looking up the definition of monocarpic I let out a small damn. Well, at least I have a beautiful and good sized pup nearby. And last bursts can evidently be so epic.

I was thinking about the beautiful things that flame up in our lives, the people whose light shines the brightest. The twenty seven club, Morrison, Hendrix, Joplin, Beardsley, Caravaggio, Bellows, etc. The brightest stars always seem to burn out, they don't tend to sit around and rust. Even in the plant world, I suppose. Why is that?

There is a changing line in the I Ching,  豐 Fêng / Abundance, that goes something like, do not be sad, be like the sun at midday. I think about it sometimes, blessed as I have been.

I am a cancer survivor, if there is such a thing. I was talking to another man this morning who has also had cancer and we agreed on one thing, when someone tells you that they have beat cancer, you have to chuckle.

Because you may have won a temporary sortie but the war is never over, you are always looking over your shoulder, awaiting the next battle.  Shit never ends and you can never let your guard down.

For me the cancer progression was 1985 to 1990, then 2010, then 2020. Innumerable surgeries, loss of a kidney. I managed to keep my bladder and prostate this last go round but just barely after stage four cancer in the wall and against much medical advice.

I had my quarterly checkup cystoscopy yesterday. There is a strange looking bump in the diverticuli of the bladder, a different color than the other two, more reddish in nature. Now it may be cancer and it may not be cancer but I need to get a biopsy scheduled stat and figure it out for sure. I would be lying if I said that I wasn't nervous. But still, perhaps it is nothing?

This will put off the maintenance BCG immunotherapy I was supposed to start. Hopefully if it is cancer, I will undergo a similar regimen to the one I underwent last year that seemed to work pretty well. Bought me another year anyway.

I'm bummed but it is the hand I have been dealt. You want the shit to be over and it's never over. Doctor told me not to worry so perhaps she is not worried or maybe worrying just won't do me any good. But I wonder if I will be able to do any or all of the five antique shows I have scheduled in the next two months?

I just threw up the bitter antibiotic I take after these procedures, a high percentage of the time I get an infection of my urinary tract. I hate when they don't coat the pills but made a mistake trying to down the large bitter lozenge with coffee.

After my operation I took Washington west to Pacific Highway. If you take that route, look to the north side of the road to the devastation that the Phoenix Canariensis have undergone. These Canary Island palms have been there since I was a kid.

Now they are dead, the invading beetle has exploded their tops like a roman candle. Haven't seen it up here in Fallbrook yet but it sounds like it is inevitable in time. 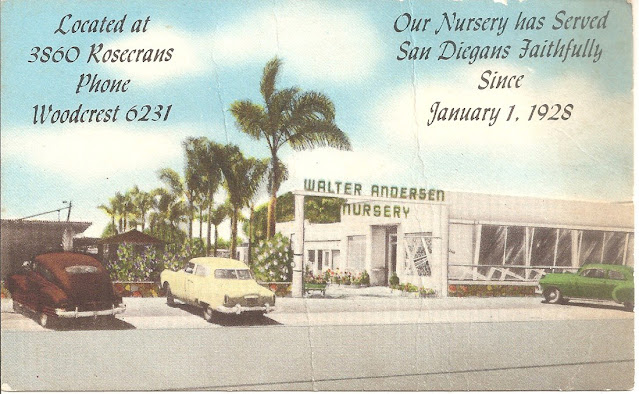 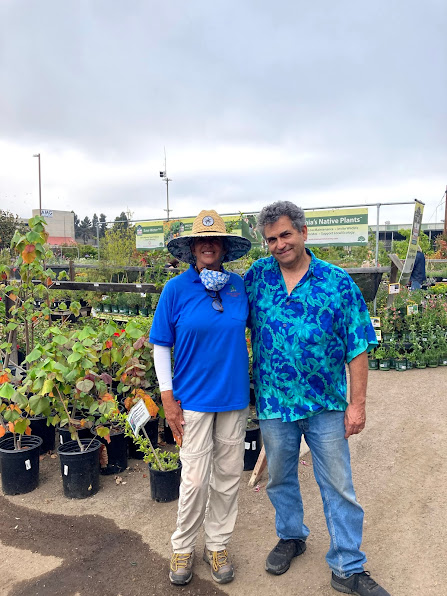 I drove over to Walter Anderson Nursery for some retail therapy.

My friend Tom's sister Linda works there, a real sweetheart. It is one of the oldest nurseries in San Diego and a good one.

Been around since 1928. Longevity is a good thing in nurseries and businesses. You have time to recover and learn from your mistakes. People too I guess. 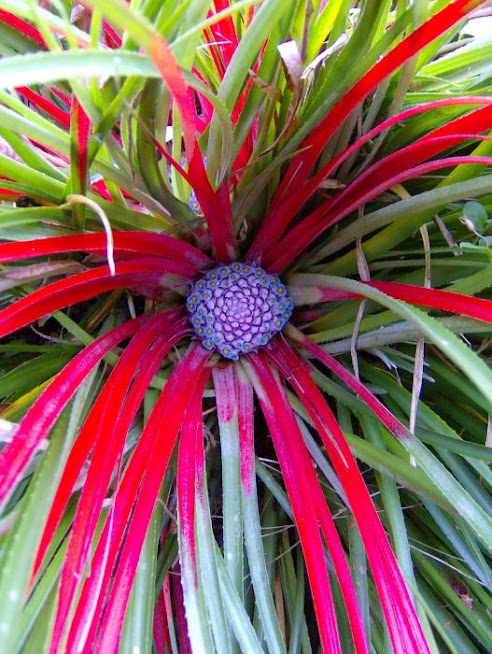 I bought a Fascicularia bicolor there, a similar look to the bromelia balensae, that had been recommended by Jeff.

Here is a picture in bloom I lifted off the internet. 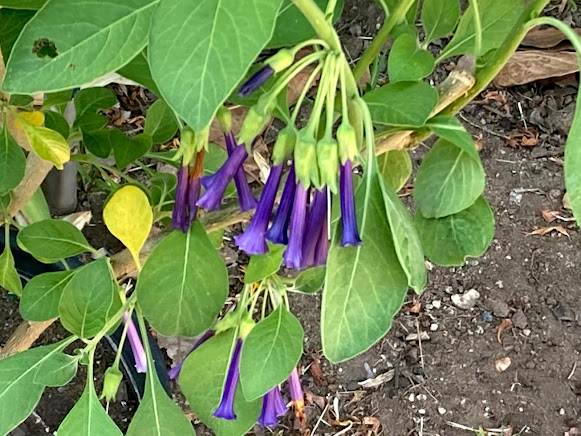 I also bought this iochroma cyanea plant which is purportedly toxic or hallucinogenic, according to who you talk to. 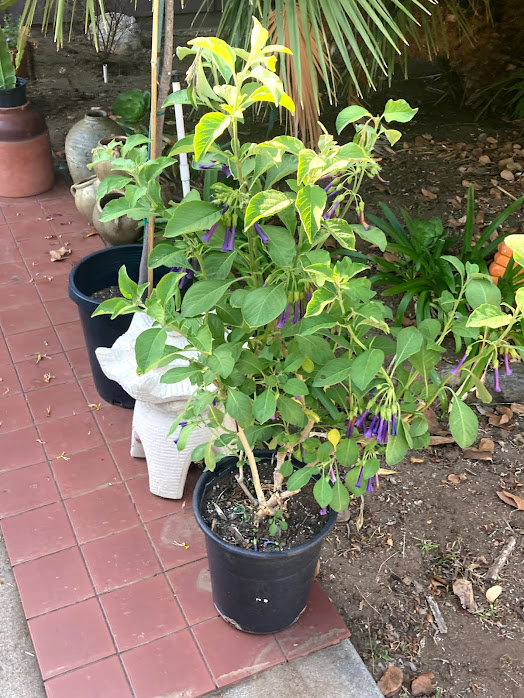 It is related to the brugsmansia, dies off similarly in the frost and I have a perfect spot for it behind the house.
Gorgeous cobalt/purple tubular blooms.
It will look great next to the new Queensland Frangipani tree.

Bought a few other things too.

Then I said, what the hell, my day and emotional state are blown, why not go over to Hunter's Nursery in Lemon Grove and see what they have got? 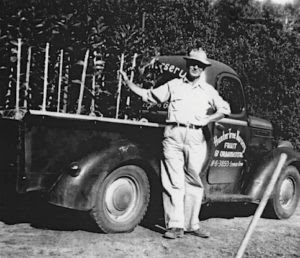 Hunter's is the oldest nursery in San Diego, established in 1919.

Located on Sweetwater Rd., they always have a great selection of roses.

Now run by the fourth generation of the Hunter family. 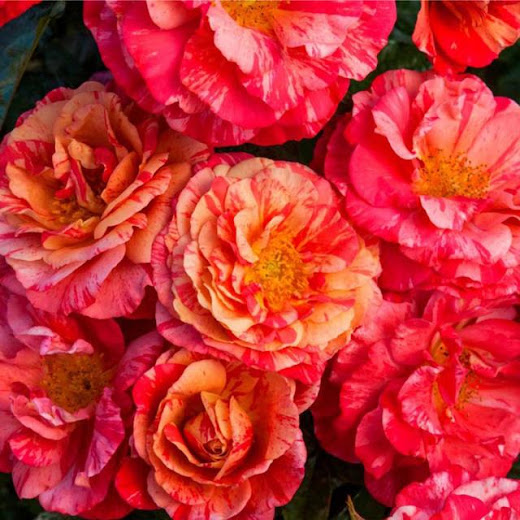 I bought a Frida Kahlo floribunda rose to climb over my wagon wheel in the front yard.

Need to take a day this week to plant and tend. 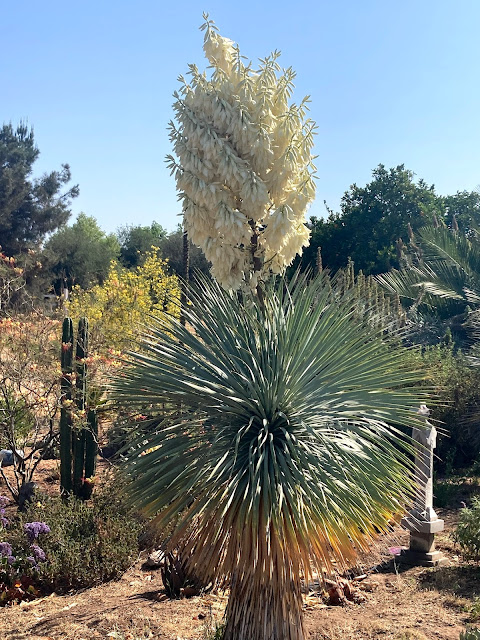 I drove across Laurel into the park waiting for my procedure yesterday.

The yucca rostratas are blooming near the Museum of Man as well as a lot of other things. Worth checking out, they are spectacular.

The blooms are so big in relation to the plant. Here is mine this morning.

Have a great weekend.