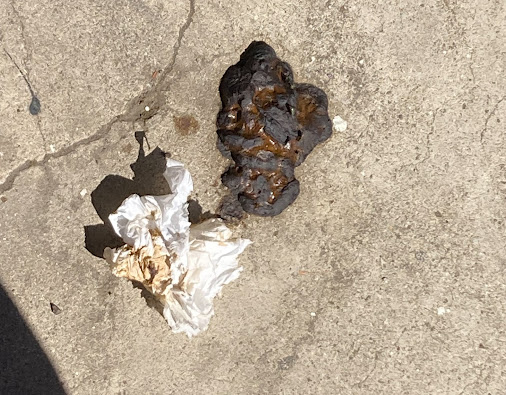 I got to the shop yesterday and was greeted by two fresh steamers at my back door.

The indigents that like to hang out behind my shop at night apparently gifted me a couple wet turds.

It was as disgusting as you could imagine and the flies were already having an absolute field day going to town when I arrived for work. 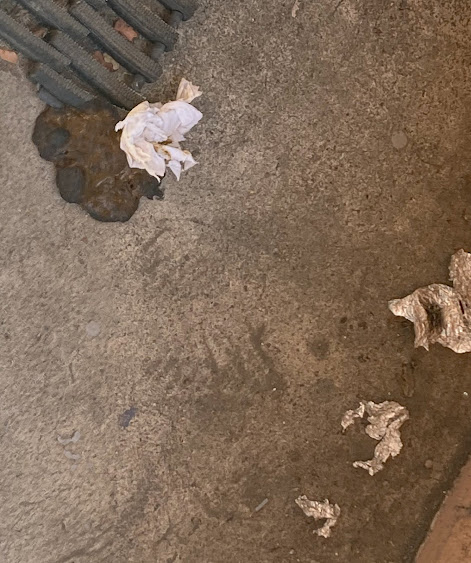 I only wish that my phantom crapper could have had a little better aim as the gross effluence nicked the corner of my welcome mat and it was frankly a bitch to clean up.

This was my third uninvited doodie in two weeks and I wonder if I had somehow provoked it?

In any case, the pooper looks like they have a miserable diet and I would definitely recommend more vegetables and roughage.

I have been at my wit's end about this and short of spending the night in the parking lot of the building that I own, really don't know what more I can do?

I alerted the volunteer sheriffs the other day and they said they would talk to somebody.

Of course, I have never heard from anyone, the sheriffs in this town are, shall I say, pretty detached and I am not sure what I could do to get them to patrol the alleys and take a look downtown.

Been trying for years. If Frank and McBroom were still around I know the problem would be solved by now and very quickly. I miss Clyde too.

Anyhow, the aluminum foil to the right of the poop patty looks like it is for cooking heroin. I know a street person named S--- who is a good guy and who I have hired for odd jobs. I told him about my situation and he said that he knows one guy named T--- who does smack and would ask him to refrain if it was indeed him smoking and producing the crap behind my place.

I went down to Joe's/Hank's/Ace and bought a square shovel and a new hose and went to work cleaning things up as best as I could. I wanted to puke, honestly. An absolutely disgusting job. I threw away the socks and paper towels the shitter (s) were using to clean themselves and washed things down as best as I could.

I hired an electrician today and he replaced the old photovoltaic with one that can hopefully not be so easily disabled.

I resent the bleeding hearts who are enabling the homeless in our town. Call me heartless but I don't think my "squatters" are some poor woman and her kid who lost her job and couldn't pay the rent. I think they are more likely drug addicts and alcoholics and I don't think it is my job to clean up after them in this way.

It might be hard to believe but the homeless or deranged crapping at my back doorstep does not make me feel more charitable towards these people. I will wipe my own ass, you take care of yours, capiche? At least try not to aim for the welcome mat, that is plainly passive aggressive.

This shit has to stop.

Easy peasy, Get a 2way Ring problem solved.You can heckle him blast a light on it and a alarm .

Not sure about the heckling, I am a target and don't know if it is really smart to engage...

How bout a fence? What a shitty situation😳

Your really applied your writing abilities to this task. I could picture everything so well... Thank you?

Maybe ask the city to provide it? Document all the shit that happens in downtown. Public health issue? They gotta poop somewhere... It's not like the city doesn't know people are living, eating and pooping in town.

Maybe put posters up with your recent photos, on telephone poles... asking for the city to provide facilities. I'm so full of ideas, full of shit.

Hey, Robert! How do you cook toilet paper?
Brown it on one side and throw it in the pot!

Just a suggestion-change the welcome mat. Possibly a rubber mat with no welcome sign on it.

Funny blog although not for you. I had the same issue with a homeless couple and their dog at my last job. A pooper scooper helped.

I like the idea of a Ring cam, I mean "Squater's Cam". You can share that right to the Fallbrook Neighborhoods. You don't have to converse with them.
Until this is resolved how about getting rid of the Welcome matt and lay cardboard, at least its easier to remove.

Love me the direction of California where the best state in the union is going so sad. The crap in la is overflowing and moving south hopefully it will turn around but as they say wish in one hand poop in the other. See which fills up first!