Insanity of the insanity defense

Authorities in Arizona are also investigating the shooting death of Lori's former husband, Charles Vallow. Lori, religious and spacey as she appeared to be, may have been out for a fat insurance policy on that one.

She has confided that she didn't really kill her kids because their bodies were actually inhabited by zombies. 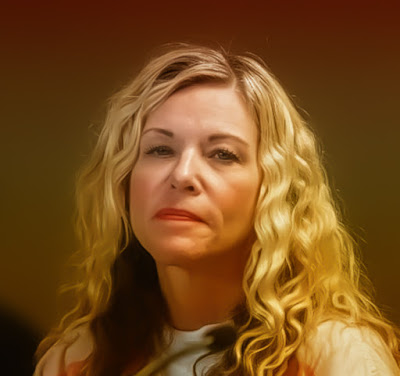 Her beautiful kids' bodies were dug up in a shallow grave on her property. You can read a grisly recount of the story here. But you don't have to, it will make your stomach turn.

What kind of awful person murders their own children?

Anyway, not to dwell but she has been ruled crazy and incompetent for trial.  The court believes that she can use some "restorative treatment."

"The completed assessment determined that at this time the defendant is not competent to proceed, and recommends restorative treatment," Judge Steven Boyce wrote in his order to stay the case.

This is, in my mind, the worst possible scenario. Because the way it usually works is that down the line, when an equally crazy shrink decides that she is now well and restored, she gets out of the sanitarium and walks, scott free. And presumably will kill again because pardon me, but she just seems like the type.

People like Lori Vallow are a big reason I am a firm believer in capital punishment. Cold and calculating, I don't believe her shtick for a second. But I guess the judge does.

Her children, as well as Tammy and Charles, deserve better.

I have followed this story for the past few months. I think she is a lun.... if she is not tried now, I certainly hope she is tried and held responsible when declared competent.

I am not up to date so I suggest some research if anyone needs the facts, but my impression of the insanity defense in CA these days is that the inmate winds up spending more time incarcerated not less and may face trial once sanity is restored if that is possible. In most cases of this sort the perp isn't faking--they are truly and deeply crazy. Anyhow I think looking further into the issue may well demonstrate that in CA at least the insanity defense is quite hard to game. It takes more than one MD sailing along and releasing people, they are evaluated by a bunch of individuals. This is because of abuses in the early days when scenarios like you describe actually took place.


I am against the death penalty without exception.

If it's wrong for an individual to kill someone (unless you're defending someone else or yourself and you have no choice), it's wrong for governments too, no matter how heinous the crime.

Far too many innocent people have been executed.

I respect your right to your opinion, I just don't agree. People who kill their children need a one way ticket to the next bardo, in my mind anyway.