One of the cool things about being a deadhead is it is easy to figure out where you were back when. And forty four years ago tonight, I was having the time of my life at a place called Winterland, in San Francisco. After all this time has passed, the memories are still as fresh as yesterday, or a sparkling morning dew.
It was located in an old skating ring at Post and Steiner and it was our gang's clubhouse back then. Right behind the soundboard, liquid flowing, gills activated.
Right about now I would probably be found inside tossing a frisbee, maybe with Peter Jester, watching Bill Graham and his pals play volleyball before the curtain opened. Everybody psyched and ready to rock. An audible hum of nervous anticipation in the air. People ready to soar. 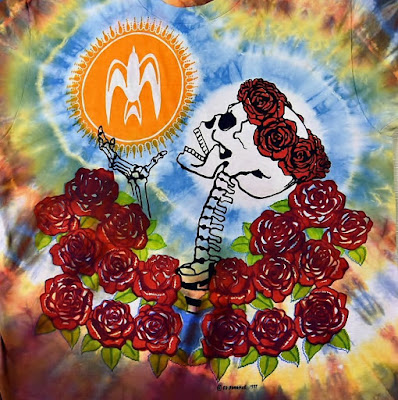 There was no better place to see the Grateful Dead, and there was no better year than 1977 and there may have not been a better month than June and well, you get my drift.
What I remember most about the week, was exquisite playing and fun, fun, fun!
Hard to explain a lifetime later, but everybody in that hall was my friend, the music was exceptional and we had ourselves the time of our lives.
Had a thought it might last forever but knew better even then. Nothing else has ever come close.
Never regretted a moment.
Thank you, for a real good time.
Posted by Blue Heron at 5:14 PM

Wish I could remember if I was there (probably)....even Funiculi Funicula on the set list doesn’t totally ring a bell. It was fun when there was a sound system problem and the audience got antsier and antsier waiting and the band would start some little musical amuse bouche to pass the time.

I do believe that you were there.

1977 was in the peak several years of my enjoyment and participation, so I do believe you are correct. Funiculiiiiii, Funiculaaaaa

What amazes me is the energy Jerry still has during the Uncle John's Band encore. Ripping. There was something about the aluminum Travis Been guitar he plied back then, with limited electronics, he didn't need them, had everything he needed right there in his fingers.

The dead did so much good for you. I have always loved your deadheadness

Favorite Grateful Dead era for me was 1967 through 1969. The outdoor concerts at Griffith park and Golden gate park. The indoor concerts at the Shrine Auditorium and Winter Land, SF civic Rose Palace Pasadena. So many other great bands playing the same shows in those days. I remember Grateful Dead shows with bands like Country Joe, Jefferson Airplane, Big Brother with Janis, Jimmy Hendrix, Stepping Wolf, etc etc.