I had a strange day last Tuesday. Before I left for the Sierras a friend called and said that he had bought a large cache of modernist paintings from a listed artist with a benefactor and was I interested in buying or marketing the group? 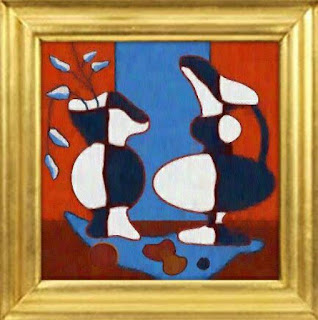 The work was fairly interesting, not the artist's best work but two hundred paintings that might appeal to mid century millennial aficionados that might want blobby abstracts on the cheap.

The money man agreed to hold them for me until 1:30 on Tuesday afternoon.

It takes time to properly market an artist, slowly bringing the numbers up, I was thinking of a two year plan with a split with the owner but was prepared to buy the whole group if we could agree on a good wholesale price.

But it was a definite project, so much of the work in poor condition and pretty mediocre.

Anyway, the work was located about two hours away, in Huntington Beach and I drove up there and met the man at his factory Tuesday afternoon at the appointed hour.

He seemed like a nice enough guy, told me he had sold his last company for forty million and then told me that there was a slight hitch.

He had made a deal with a guy from Laguna on the paintings that very morning. I was a bit taken aback, two hours there meant driving two hours back, empty handed. I told him that I would have never gotten involved if I had known that he was contemplating a bidding war or that he had already made a deal. Why didn't he call me? He apologized and said that the deal was just so sweet he couldn't pass it up. Guess he was too busy to call.

Honestly, after seeing the work, I really didn't want any part of it anyway. Very mediocre and a lot of work to market with little upside. And really, the numbers the new suitor were throwing around were ridiculously high and not something I would have been close to paying. He was smart to jump on the deal.

No biggie, you win some and you lose some. Never trust a rich guy who says it is not about the money, it is always about the money with them. That is how they got rich.

Anyhow, I am leaving, no point stewing over paintings that I didn't even like when I saw this one leaning against a wall. 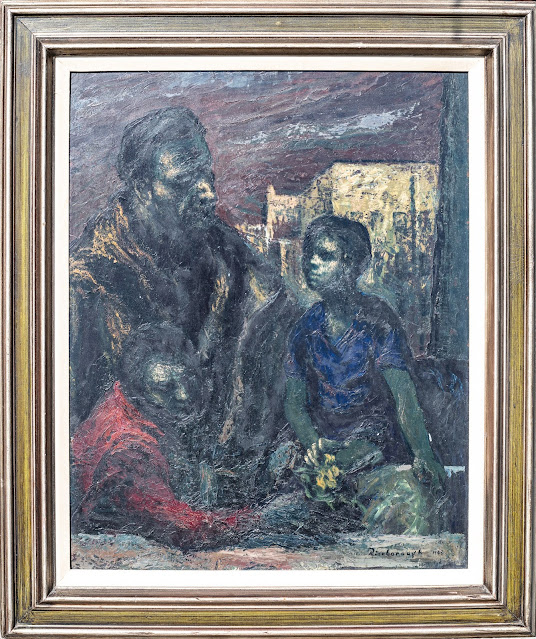 Modernist, hints of Goya and Roualt. Not necessarily my taste but not too terrible and perhaps created by an African American artist, a genre that is hot right now.
"How much is that one?" 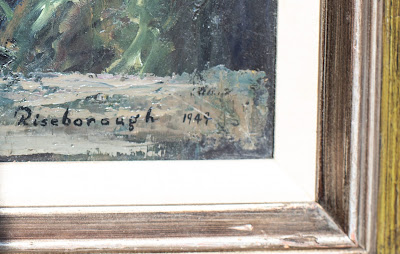 He told me that it was two hundred dollars and not signed. Weird, I could see a signature on the bottom. Oh well. I would go fishing and buy something, hopefully pay for my gas. I handed him the cash.
Now this is the part where I usually tell you that I hit pay dirt and I can't say that yet. But the artist is sort of interesting.
His name is Douglas Riseborough. He was a Canadian American muralist of some repute.
He painted murals at the UCLA School of Law and at the New York World's Fair. Riseborough had quite the reputation in his time but little auction history. 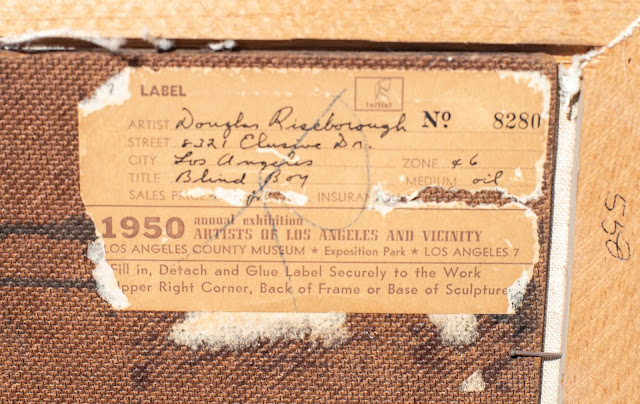 Now this particular painting is not only signed, it is dated 1949, and it is titled on the back, Blind Boy.
It was exhibited in 1950 at the Los Angeles County Museum.
And if the label can be believed, the artist lived on most interestingly named Elusive Drive. 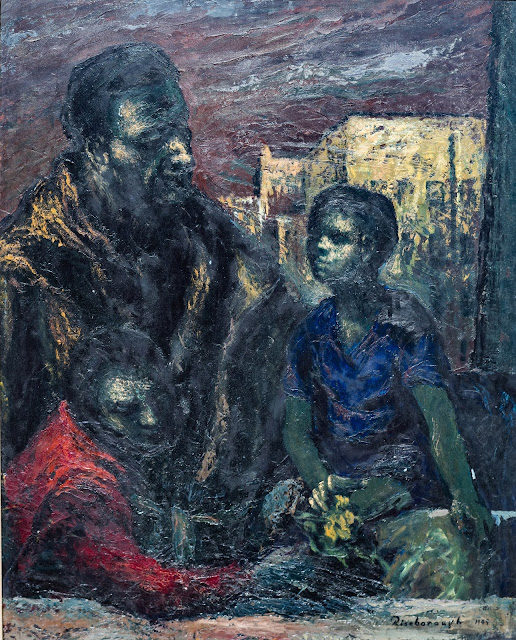 I can't find a lot of information on the artist but there is this article.
Riseborough liked to work big, his World's Fair mural was 125 feet long, and he tended to heavy social and political commentary, in the steps of artists like Siqueros and Orozco.
I do know that he was born in 1922 and lived in Los Angeles for a long time and can only assume that he has passed or he is a spry 99 today.
Perhaps I will find a home for it one day or send it to auction. I think it would benefit from a cleaning.
Maybe I can get a few dollars for my efforts and all my driving.
Posted by Blue Heron at 5:10 PM

I think you will do very well with that painting.

It seems Elusive Drive is an abandon road in Laurel Canyon.

The painter's home and studio is now for sale.