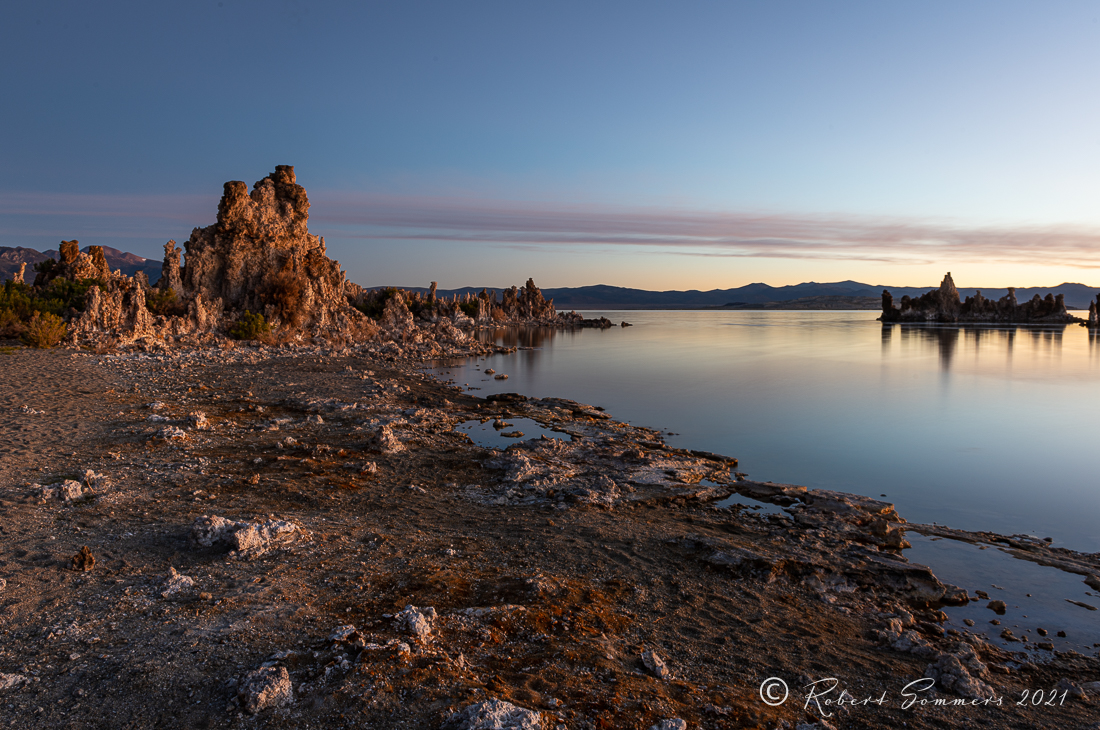 So I will try to wrap this up. I got to bed on Friday night about one after the mediocre milky way attempt. I remember looking at the bedside clock in the motel at 4:08 in the morning and drove myself back to the beach as soon as I could groggily throw my clothes on. So you can do the math, I am operating on three hours sleep.

I was the first one to my destination, soon to be joined by an over talkative chap from Colorado who felt the need to recount every shot he had taken in the last week like a laundry list. He also kept going on and on about shooting in the "blue light" which I assume is a paean to Galen Rowell but might instead be a religious thing. 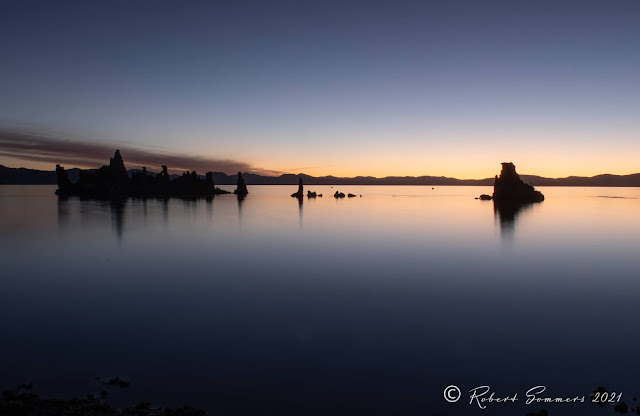 I set up on the beach and took a couple shots that were not too terribly interesting. I waited for some more light to come.

There were not a lot of clouds so things were not too promising but I can't think of too many other places where I would rather see the sun come up. 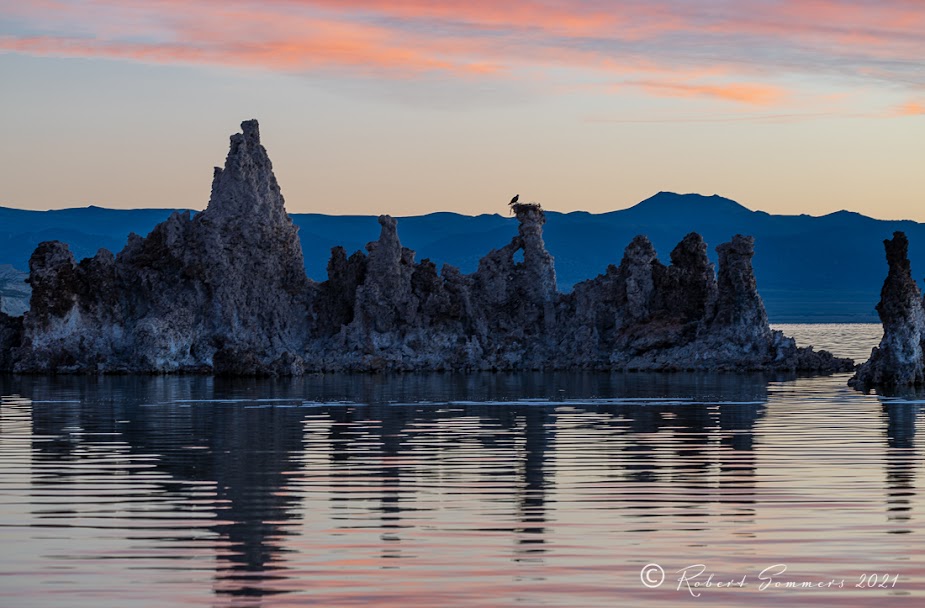 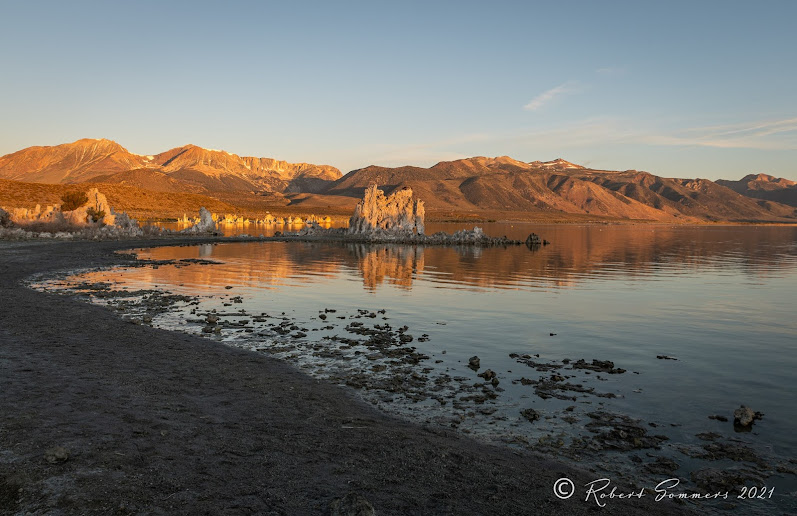 I saw a group of photographers arrive on the hill and start making their way down to the South Tufa Beach.

The sun finally started to cast its light on the mountains and the unique carbonate landforms called tufas. 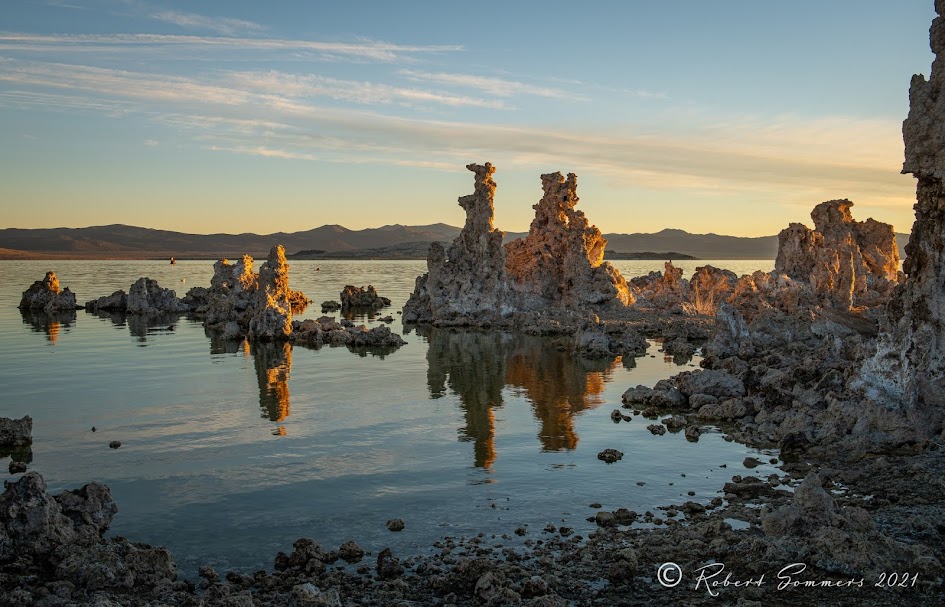 It was about this time that things went temporarily sideways. A Frenchman and his wife had wandered into the picture. Literally. We photographers have very few rules of etiquette but one thing we try to do is respect each other's sight line. First come, first served.
But the Frenchman set his tripod up right in my field of view. 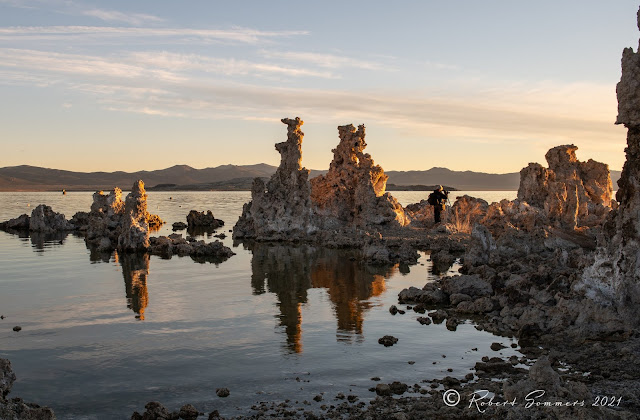 I gently called out to Mr. Clueless and asked him to get out of my shot.
He started sputtering, said I would be somewhere else if I was smart but he eventually begrudgingly cleared his gear out of my picture frame.
It is a funny thing. I have been taking pictures for over fifty years. And almost invariably, the people sporting the most expensive gear, your Hasseblad and Leica photographers, seem to take the crappiest pictures. 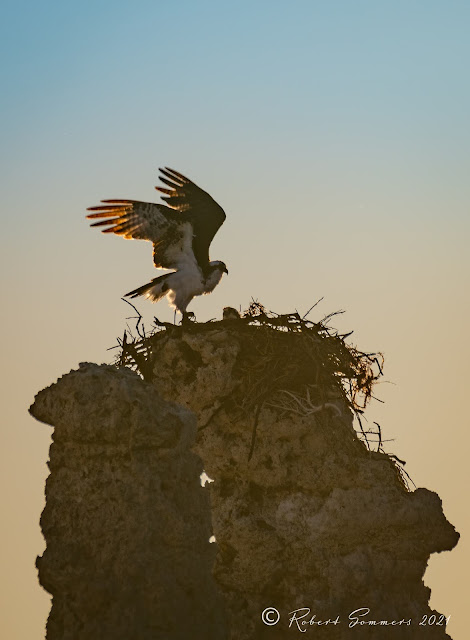 I know it is an unfair generalization and my dad shot Hasseblad and he was fairly competent and I do wish I had a medium format Leica but I am serious.
Not sure why but you don't see a lot of workhorse photographers shooting those cameras, they mostly look good on bookshelves. Short of in the fashion studio, I guess.
People evidently think that expensive gear will make them better photographers.
And also these sorts tend to think that they are artistes and god's gift to photography. I am indulging in gross generalizations here, remember. No offense intended KP.
I always had crummy gear growing up, Topcons and Konicas mostly, but I learned to get the most out of them, if I can say that humbly.
Anyway the few decent minutes of light were soon over and I was sitting there amiably chatting with a couple of nice photographers from Santa Fe and Santa Rosa when Frenchy, still sore at my upbraiding him publicly, says, with the most petulant sneer,"If you guys would stop talking and move I could take my pictures."
Zoot alors! I pretty much lost it, I honestly can't remember going off like this before during a shoot.
"Did you just say, if we stopped talking and moved, you could take a picture?"
My fuse was lit. I was ready to fire. After his previous poor behavior he was now trying to save face by being a total dick.
I suggested that my gallic friend commit a physically impossible sexual act with himself and I said it at the highest of possible decibels. The Frenchman scurried off in surrender, toting his precious Hasseblad with him. Amscré!
I apologized to my newfound cronies and they laughed and said that they were with me on this one. I drove back to the Lakeview and checked out, had a great and filling breakfast before I left, something I tried to do every day of this trip. 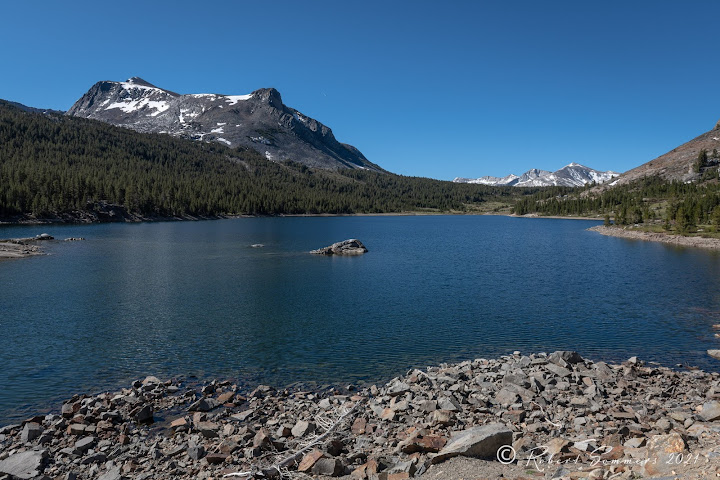 I headed for the Tioga Pass which was just opened back up May 27th. 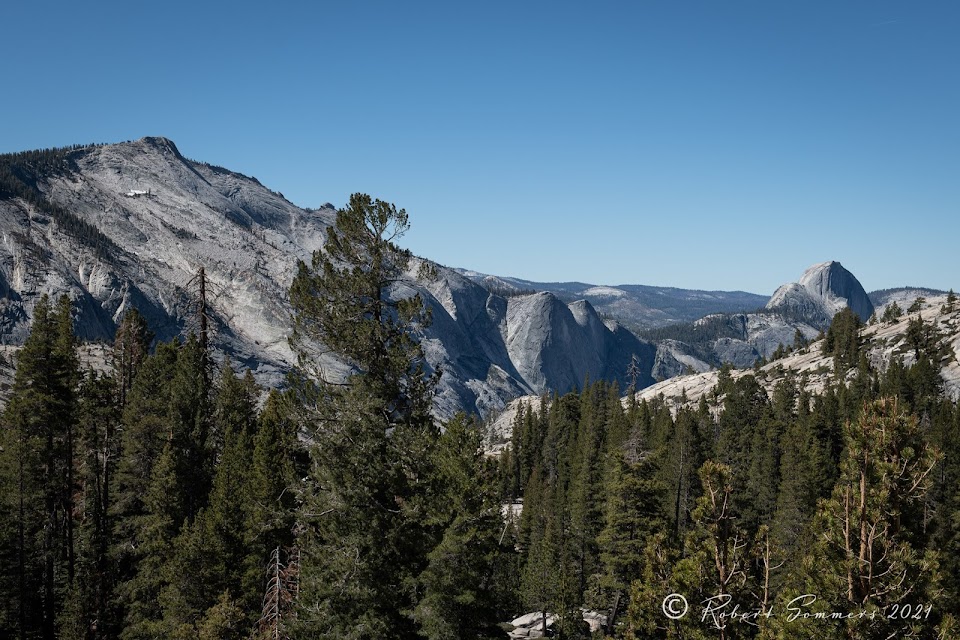 It was so beautiful through there. 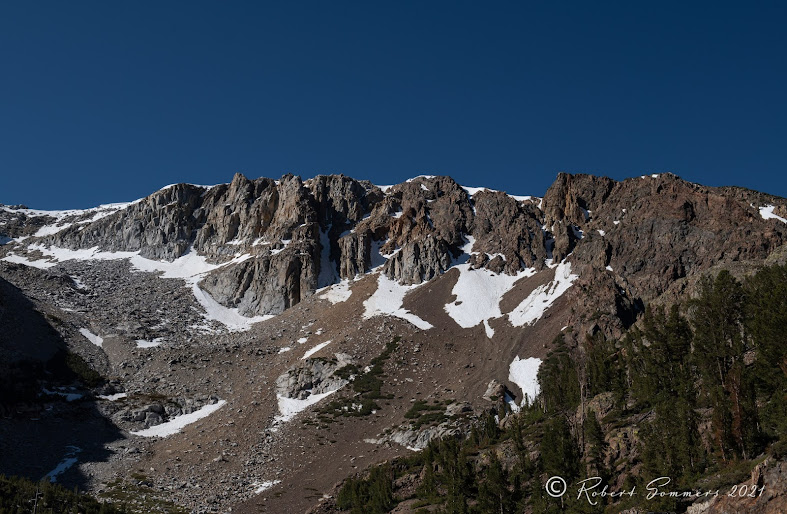 I showed the Ranger my Senior Pass and they checked my reservation and I entered Tuolomne Meadows and the park. Just incredibly pretty. 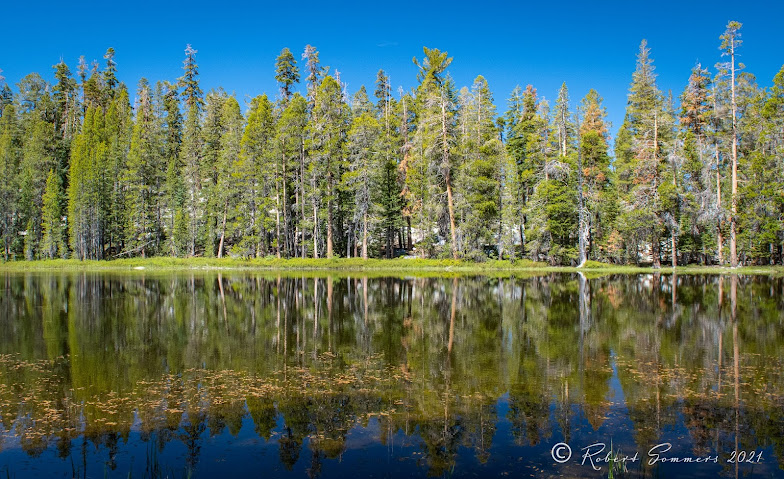 I got to Yosemite and it was another story.
Even with the attendance restrictions thee place was mobbed, mostly by people from India. They seemed to want to get selfies of themselves in front of every conceivable rock and sign. Lots of posing.
Pretty girls but my vacation in nature and solitude was clearly over. 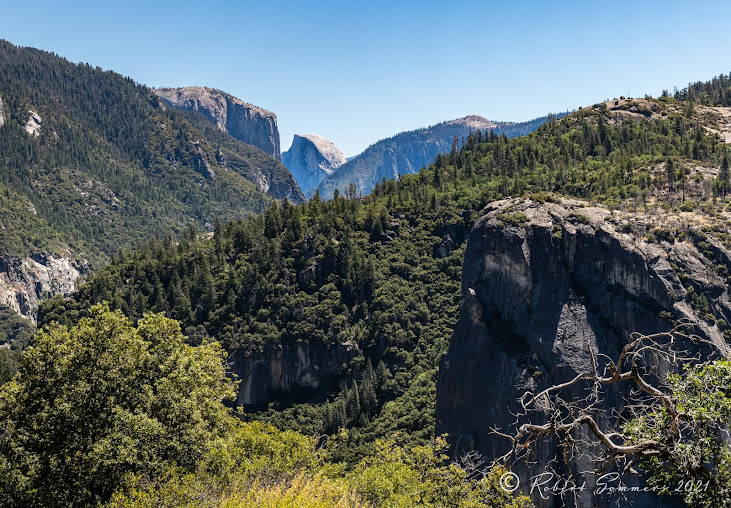 The valley was jammed. I drove up to Glacier Point and there were so many people there all three parking lots were full. I could have stuck around but it is a sacred spot to me because of my father and my history there and I decided to leave instead.
I did stop at the next viewpoint and grabbed a shot of Half Dome. But my vacation was officially over, with one more day to drive home. 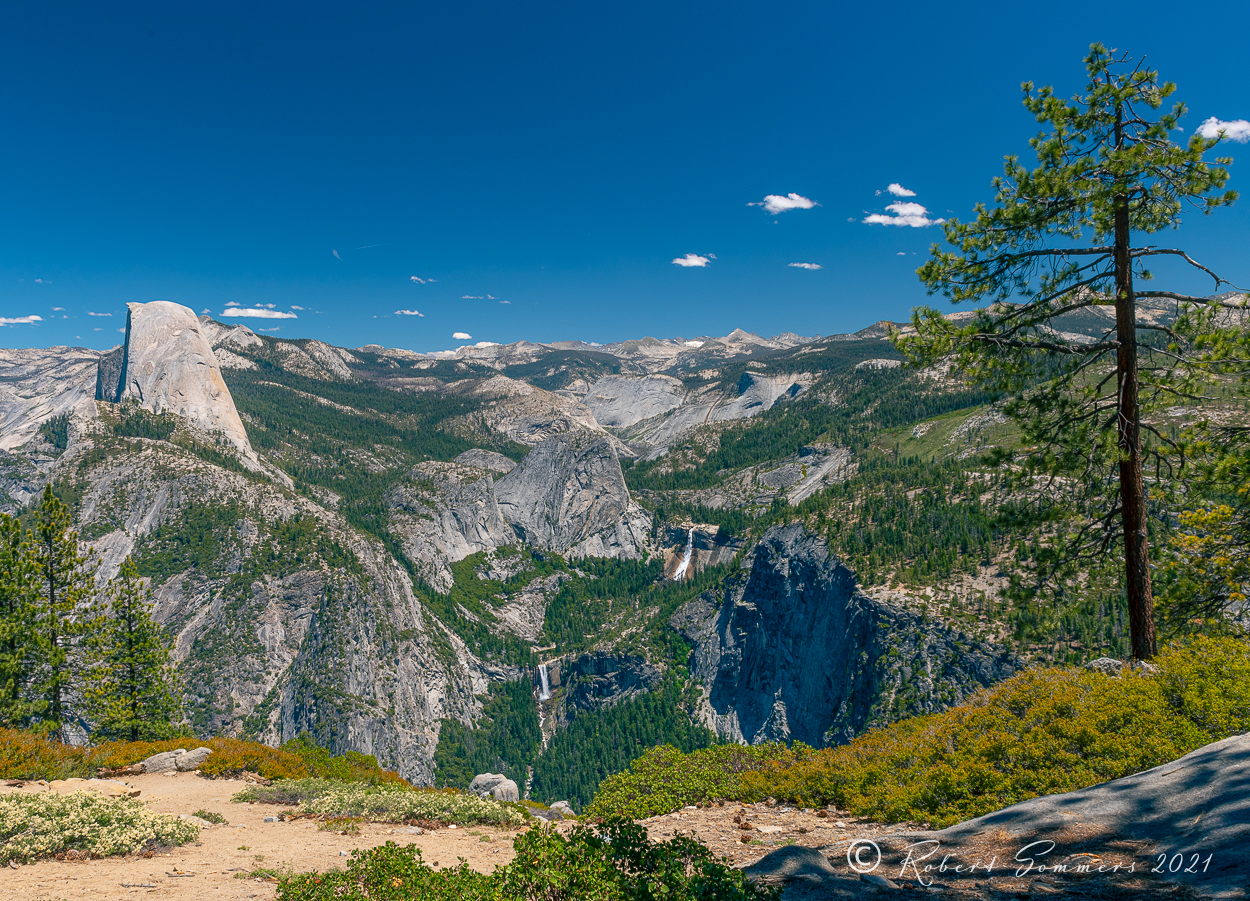 It was a great and much needed road trip. First real trip since Covid hit. I discovered a lot and had a lot of fun, saw a lot of beautiful sights.
Posted by Blue Heron at 12:38 PM

Nice job on the story and photos! You and the French seem so have some pretty basic issues with each other :-)

If you look at the marketing for Leica products it seems obvious that it is highly influenced by jewelry and fancy watch advertising. Little wonder that the folks sporting these cameras are a lot like the Rolex and Cartier mob. It is slightly sad as the Leica stuff is made to an unusually high standard and is very useful as a photographic tool. If Leica had to survive on the customers who use their instruments as instruments not jewelry the company would be broke in a year. Hence the weird marketing and the way it attracts jerks like poop attracts flies.

Now you know the second reason for taping over the red Leica dot when in public. The first reason is that the red dot screams to the universe "Steal me NOW!"

Tell us what the test says. I really wish that we all were not so prone to bad disease