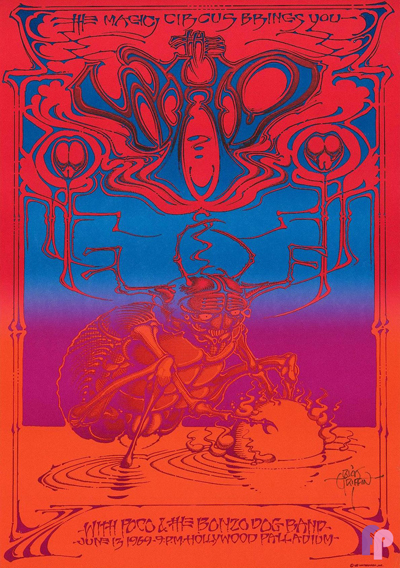 I love the Who but surprisingly have never seen them live.

Roger and Pete are touring with a backup band and an orchestra this year and I thought about catching a show and scratching them off the old bucket list.


The Who will also be releasing their first album of new songs in thirteen years later this year. On stage, the line-up will be rounded out by familiar Who players featuring guitarist/backup singer Simon Townshend, keyboardist Loren Gold, bassist Jon Button and drummer Zak Starkey, and complemented by some of the best orchestras in the U.S. and Canada.

I have heard Roger on the radio dissing the new material from Townshend but I don't care, I love the Who. Ringo's kid on drums, Pete's brother on guitar.

For about a hundred dollars a ticket I can get a seat in the nosebleed section of Viejas Arena.

But for better seats you have to shell out some serious dough. 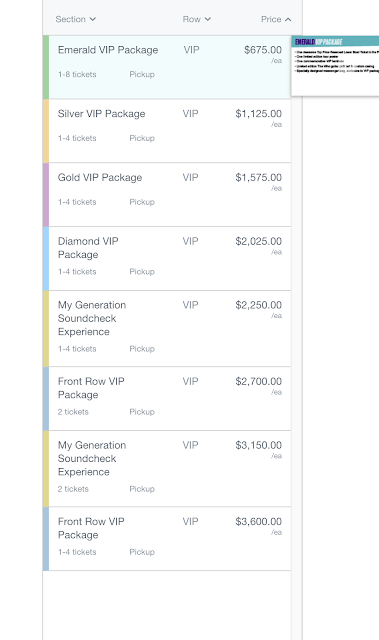 You can get the Who My Generation Soundcheck Experience for a mere $3150 per ticket.

I assume that it comes with limousine service, a hooker and an ounce of peruvian flake.

Seriously I think back to some of the epic shows I have been to in my life and how little I have paid for the privilege.

Rock and roll was a lot more fun when we were paying two, four, six dollars a ticket. That was the cost back when I was a concert going kid. Woodstock was $18.00 before it was free and that was a three day event.

The six hundred thousand fans that came to see the Dead, Band and Allman Brothers at Watkins Glen in 1973 paid ten bucks for their tickets.

I think I paid four dollars to see Jethro Tull, Thick as a brick, still the greatest show I have personally ever witnessed. 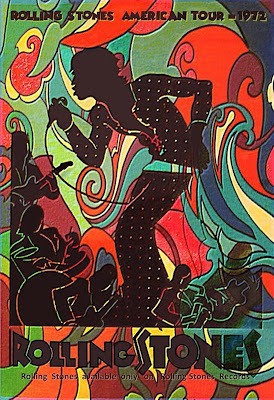 My sister Barbara and I saw another amazing show, the Rolling Stones on Mick's birthday at Madison Square Garden, July 26, 1972. Some guy named Stevie Wonder opened for the band. Cost us $6.50 a ticket.

That was a lot of dough back then but now it is freaking ridiculous what they are charging for concert tickets. I don't think it was all about the money back then, there was a different ethos. I guess these guys are all getting on in age and we are now paying for their hip replacements and stints. What the hell happened to "hope I die before I get old?" Guess that didn't happen.

As I recall, I have only paid obscene prices one time and that was for Bowie. Did pay a lot to see the Cream reunion in NYC. I am not going to do it again, not going to pay four hundred dollars per ticket for a decent seat. Would seriously cut in to my fun index.

I saw Stevie Wonder open for the stones in 72 in Chicago, nice day in July. Saw Grateful Dead open for the Who in 76 in Oakland, went with Harvey and Vlad, that was a memorable pilgrimage. BV

Well, lemme see..saw The Who at the Grande in '68 I think...$5....2nd row from the stage, ducking Keith's broken drum sticks + '72 in Columbus; The Stones + BB King (Get Your Ya Ya's Out Concert in Motown), a whopping $10 or $15, and wound up at the edge of the stage, gathering rose petals that Mick tossed. Those were the days my friends, we thought...

Those of us that got to see the Stones with the great Mick Taylor are very lucky. Band has never been the same...

I remember hearing somewhere that the Who demanded to get paid before they played at Woodstock.
I think the quote was something like - "we're the 'orrible 'oo and we won't go on until we've been paid"

Robert, The first rock concert I saw was the Cream at the Forum 1968 phenomenal! I saw the Who in 1970 Anaheim stadium sat on the infield behind the pitchers mound. They played most of the Tommy Rock Opera it was awesome good sound system for such a big event. Interesting I guess the concert that stands out for me was Led Zeppelin and Jethro Tull at the Swing Auditorium San Bernardino Aug 8, 1969. I believe it was the first US tour for both bands and they were both absolutely amazing paid $5. I saw the Stones live at the infamous Altamount concert my friend Tim and I were next to the stage never again am I going to a Stones concert although still a big fan of there music. Back in the day so many SF shows the Grateful Dead, Jimi Hendrix, Janis, Airplane, Moby Grape, Country Joe, etc etc all a blur now.

My first real show was Canned Heat, Stonybrook College, 1969. Had seen the Elevators in 66 with family at Hemisphere in San Antonio but it was loud and incomprehensible.