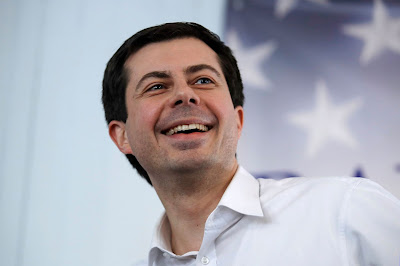 I haven't talked about politics for a while, forgive me for a short shpiel. I was thinking about the fast rise of Pete Buttigieg in the polling and have a few thoughts about his rapid ascent.

I think that one of the many things that scares people about the current occupant of the White House is his mercurial nature.

He was the "disrupter" candidate and turned many governmental institutions and modes of conduct on their collective heads, sometimes in a very frightening way, like his entreaties to North Korea and Moscow or his appeal to white nationalists. These types of actions are contrary to long standing policies and the ethics of either party.

I think that Americans are consciously or subconsciously looking for a candidate that is sober and exhibits a modicum of solidity. A return to normalcy or to the presidency as we once knew it, before Trump.

If you look at the current crop of democratic contenders, with one or two exceptions, they seem like a fairly unremarkable bunch. Quite a few of them are very progressive and promising all sorts of free stuff, Medicare for all, free college tuition, etc.. I think that there is a problem in following the radical Trump agenda with another radical agenda that will merely swing the pendulum heavily in the other direction. The danger is always overreach.

Our country is pretty evenly divided. We need to get back to the center, find some sort of bipartisan solution, a middle ground, having been caught in this polarized political vortex since at least the last Bush administration.

Oddly enough, Pete Buttigieg might be the ideal candidate to bring us together. A mayor, an administrator. A midwesterner, not a member of the coastal elite, not a socialist, a man of faith and conviction. Clean cut, articulate, sound. Steady. A Rhodes Scholar, a war veteran, a man courageous enough to be out in Indiana. I think he will have a strong appeal to the heartland, sexual orientation notwithstanding. He also has generational traction because of his relative youth.

If a pussy grabbing schmuck like Trump can be President, a lying narcissist who received $413 million dollars from his father (when adjusted for inflation), whose real estate businesses went bankrupt six times, was a party to over 1450 legal actions as a defendant, discriminated against minorities, stiffed his subcontractors repeatedly, purportedly committed tax fraud, cheated on his ex wives repeatedly and on the current one while she was pregnant, grifted the public with a fraudulent for profit college scam, and used the presidency as a way to get rich with fat emoluments while dissuading any legal oversight, than I think Pete can too. If America can survive a shyster, it can certainly do worse than a small town mayor. 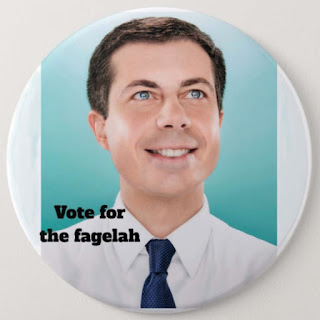 I like Swalwell as well, although he doesn't seem to be getting much of a lift. Nobody knows who he is. Not a big Kamala Harris fan after the way she seemed to protect Jerry Brown from coming clean about his dalliances with the power companies. The Picker/Poland stuff, never did get to see the emails.

Don't trust Bernie, Biden a bit long in the tooth and getting longer. Klobuchar is pretty good but has a reputation for being a bitch to her staff. Booker seems like a phony to me. Hate Gabbard on foreign policy, think Warren will only continue our uncivil war. Will be interesting to see how it all shakes out.

He's a bridge too close, unfortunately. In another time, in another world.... I guess I have to root for Beto. And he is
very out of the picture at the moment. Can he come back from out of the field? Perhaps. Once they start debating.
Bernie's the one, Joe's the same old same, and Bernie's the same old old. Now if Beto is more like Robert than Jack....
No woman in the picture that I can see. How's that for an assessment?

I forgot about Beto. Don't think he has quite the intellectual breadth of this guy but he is one hell of an air drummer.https://www.youtube.com/watch?v=e8mVYTSTT9Y

I like Pete... I also like Beto, although I am not sure just where he stands. Reminds me a whole lot of Bobby K.

I am not sure that middle America is ready for a gay man who has a husband. I hope I am wrong.... seems like a bright, articulate guy.

If a situation ever existed in a nation that demanded a gay approach it seems we have it now.

In all seriousness I feel that we truly need a operations type president who can understand the challenges confronting the nation and deal with them rationally and effectively.

I think Pete might well be able to do that.

I've done some research on Tulsi Gabbard since I became aware of her some four or five months ago. She gets a lot of aggressive smack down from the right and from the left. I see in your statement that you do not care for her foreign policy. The speech she gives over and over on our foreign policy is that she would like to end the regime change wars the USA is involved in and use the resources that we are spending in these wars back home and by helping people, not bombing people around the world.

So with all sincerity Robert, what am I missing here when I ask you why do you hate Tulsi Gabbard's foreign policy?


To me Bernie is the only hopeful worth voting for. He's not too old, Bernie has more energy than the rest of the pack combined. He's a forward thinker who's been on the same progressive track since he was in college. Says what he means and means what he says.

All the other dem hopefuls, including all the self-proclaimed "progressives" are tied in to the system.

Creepy Uncle Joe is a joke.

Beto is a rich kid playing at being progressive, just another cog in the machine.

Buttigieg recently returned a $130k contribution to a lobbyist, but had to be shamed into it.

Elizabeth Warren is a half hearted progressive.

Kamala Harris is a hypocrite, she's full of shit. And not at all popular in San Francisco, by the way.

Tulsi Gabbard is good at relaying Bernie's message but would lose to Trump. Not a serious candidate.

It's time for the 1% to pay their fair share.

It's time for the U.S. to join the other "advanced" nations on earth and support single-payer health care.

It's time for us to actually live up to the platitudes we keep spouting, all this land of the free and home of the brave crap.

It's time to actually be the good guys that we keep saying we are.

It's time to cut the military budget radically and get our bases out of Asia and Europe, bring our troops home from Afghanistan and quit screwing with other countries.

It's time to dismantle the military-industrial-congessional complex.

Fuck the DNC who support the same old shitstem, they are lackeys to their corporate masters.