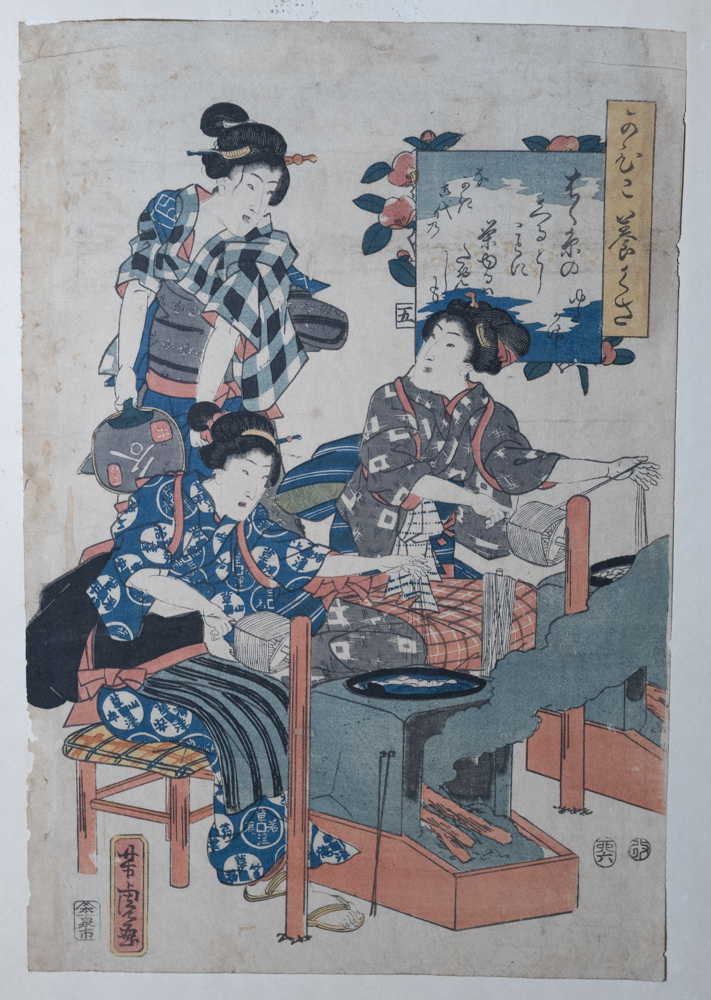 I thought that it might be the work of Utamaro initially but after a bit of research and an email to Ronin Gallery in New York found out that it was actually created by a man named Utagawa Yoshitora.

Yoshitora was the oldest student of the great Japanese artist Kuniyoshi.

Yoshitora's period of work seems to extend from the 1840's to the 1880's. His birth and death date are not known at this time. He worked in a time period of the late Edo called Ukiyo-e, or "pictures of the floating world."

Uki means both sadness and "to float." The work from this period was popular amongst the middle class of Japan of the time and also affordable to them.

He was prolific, working on both prints and book illustrations, of which he is said to have completed over 100.

Yoshitora screwed up along the way. He was evidently a bit of a rebel. He produced an irreverent print in 1849 called Dōke musha: Miyo no wakamochi "Funny Warriors - Our Ruler's New Year's Rice Cakes." It was accompanied by a rather scandalous poem.

This was interpreted as making fun of the shogunate and various authority figures and the artist was put in shackles for fifty days and summarily expelled from Kuniyoshi's studio. Thankfully, he continued to work after his punishment and expulsion.

I need to find someone to translate the Japanese here. I was told that it was probably produced in the 1860's. I just figured out what was depicted on the print, on my own, thank you. At first I thought the ladies were spinning silk thread. A closer inspection shows me that they are instead probably engaging in the ancient art of dying the indigo blue thread known as Ai-zome, using what is known as Hirose dye. The brazier was the tip-off, not sure why I didn't catch this right away. They are heating up the dye. Unless of course, I am dead wrong in my interpretation, which is always possible as well. I can not find another image of this woodblock so I am on my own here.

I look forward to learning more about this particular print, and the artist.

first postscript: my buddy Dave, who teaches English in Japan, sent me this note -

yes, they are heating the silkworms' chrysalises in hot water to make it easier

from the silk.. much like you would put chickens or ducks in hot water to make

it easier to pull their feathers to prepare them for eventually cooking them..

Thanks, Dave. See, I was right and then I was wrong, pays to ask questions sometimes. Would love to get an exact translation of the Japanese if I can.

I just acquired a copy of this print and like you wondered exactly what they were doing. Tie-dyeing, I thought, or maybe making noodles. I was thrilled to find your discussion of the print and to benefit from the research you have done! I have a few other prints having to do with silk production, and find them very interesting.