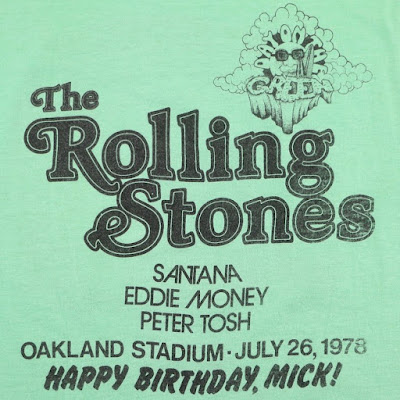 I only saw the Stones three times. I could have seen them many more times but the second time was pretty freaking bad in Oakland in 1978.

I took the BART to the Coliseum. Day on the Green. I think that I was with Indian and Richie Patrick, maybe Bobbo Schafer too. Wonder if he is still alive? I have lost touch with so many old chapters of my life.

They played with Peter Tosh, Santana and Eddy Money, who was truly awful. Apparently Toots and the Maytals also played that day but I don't remember them playing and I have a really good memory. And I love them. But no recollection. Strange.

Oddly enough, this was also Mick's birthday, the same day as when I saw the band at Madison Square Garden in 72.

They were a shadow of themselves without Mick Taylor. Don't even remember where I saw them again in the eighties but I remember it sucking so bad that I swore I would never see them again.

So happy to have caught them at their peak. I am sure that Ron Wood is a wonderful guy, it is nothing personal. To me he has a very thin tone, Mick Taylor's was always so full and robust and incredibly lyrical. I never got to see Brian, who was a stellar musician, but when Mick Taylor left, the Stones ceased to be a blues band.
Posted by Blue Heron at 8:26 PM