It was a long slog up the five today, to my eventual destination in the Central Valley. The wind was incredibly heavy all day, on two occasions near the Tejon Pass it felt like a tire had come off the van the gusts were so strong.

It made for a slow, gritty ride, with two hands on the wheel at all times, had to stay very focused. Seven hours later I checked into my hotel and decided to get some dinner. 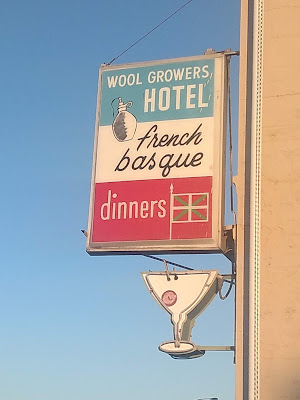 I have heard about the Wool Growers restaurant for years but had never stopped by for some reason. Tonight that would change. I took Henry Miller Blvd. about 10 miles southeast, past duck laden marshes and packing houses, definitely a different world up here.

I finally made it to my destination in Los Banos. The Basque restaurant has been in this old building since the 1890's. The Central Valley has always had a large Basque community and they have met in the two story structure for over a century now.

The parking lot was full of duallys and pickup trucks. For once I didn't have the dirtiest car in the lot, but it was certainly close.

You walk past the very spartan bar and enter the dining room, also very plain. Reminded me of some of the rustic tavernas I frequented as a kid when I lived on the Greek island of Ios. 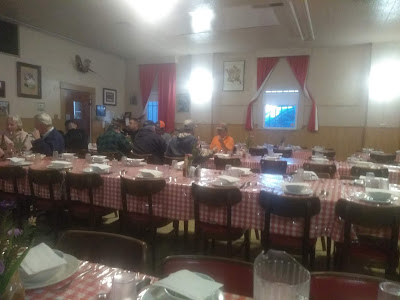 The Basque establishment has very long tables, I counted 26 chairs per table, all covered in red checkered oil cloth.

Hunters, workers, scruffy farmers, guys in NRA caps. Old french posters from the Basque region dotted the walls. I don't think much has changed there in the last 120 years.

Server set me in a seat and here came the food. Farm fare. Bread and butter, beans, potato salad, vegetable soup, green salad.  Huge portions. I could have had a carafe of the house wine too if I wanted it and was still drinking. 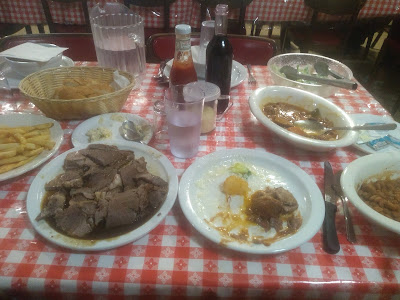 I started digging into the sides and was getting a little nervous. There was just way too much food. I knew the trap and I had to pace myself. I had heard that you need to give yourself an hour or two at these sort of places.

The problem is they served me sides for a table of four or six and I hit them hard. Not gourmet fare, think good peasant food and I mean that in the most favorable way. Not an ounce of pretension at the Wool Growers.

Next came the lamb stew. I flashed to my experience at the French Laundry. Begging them to make it stop... Then came the entree, the roast lamb. I guess I would have ordered something else if I knew that lamb would follow lamb. But both dishes were truly excellent.

Met some interesting people there tonight, very friendly. Family from Encinitas and a man from Fiji. Restaurant staff were excellent.

I skipped the french fries which are reportedly great and the free dessert. Finally know my limits. I went to the new Brazilian barbecue in Carlsbad recently, Texas in Brazil, and hurt myself. Wasn't going to do that again. Will I ever come back here? Sure, but only if I have friends to help me eat.

I ate there about 10 years ago. Had the ox tail, I believe. It was very good. I bet the menu hasn't changed since then.

Fabulous picture of the kill. ~ DO

Whatever happened to the 1950s when real men bought cars with five or six color choices and no complaining!