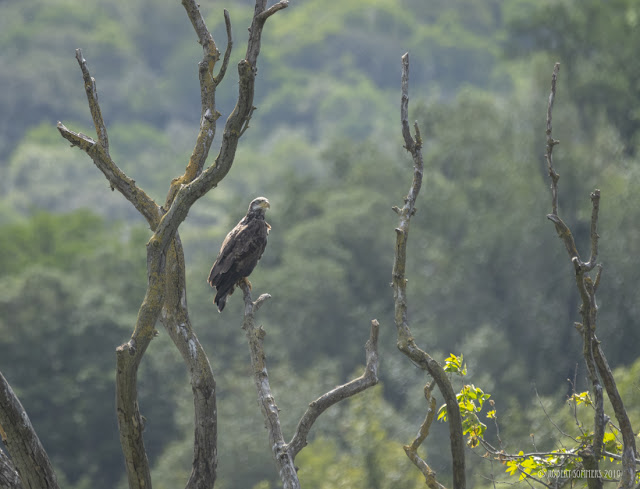 I'm back from my trip up north. It was far less productive than I had hoped for and I don't think I have the emotional strength for a full internet post mortem right now. Too tired, too bummed. Did have some good times, good food and good talks with old friends.

Sunday morning Warmboe asked me to drive up to the Richmond Bridge with him. He had seen a pair of osprey nesting up there. I saw the nest but getting a shot from the second lane (right lane was closed) through the bridge railing, going seventy miles an hour was a fairly impossible task. We tried twice. 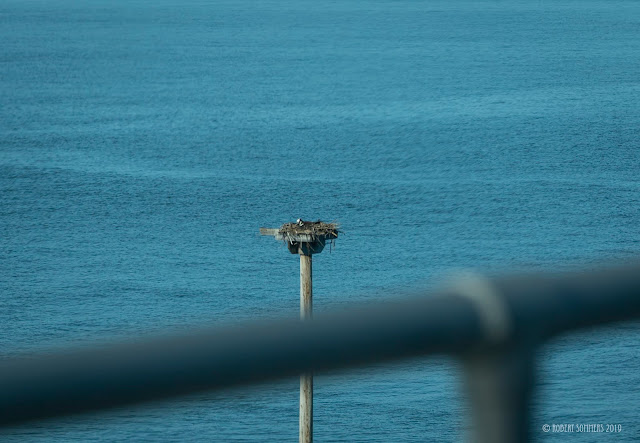 I did see a nice jubea chilensis palm tree at the east end of the bridge in a palm yard. So beautiful. My favorite palm, the sight of one always puts a smile on my face.

Went back to the show afterwards, did a little business and  finally packed out, tail resting firmly between my legs. The defeats are getting more and more crushing, not sure that I am emotionally equipped for a steady diet of failure.

I usually come home Monday but I stayed an extra day. Dave has been pretty sick and our old college roommate Jeff was flying in from North Carolina to spend some time with him. I haven't seen or heard from Jeff in twenty years but we were the three musketeers in our younger days, both in Cardiff and on the Grateful Dead tour. At least that is the name Rick Griffin gave us.

Dave and Jeff both of course cleaned up and grew up, had families, became very successful. I did my thing, whatever that is, hung around Terrapin Station, made rust.

The three of us and Dave's wife Amy went out for a meal Monday night. The excellent Bistro Aix. Porterhouse for four, I could have easily polished it off by myself. But the meal was delicious, nonetheless. The owner, John Beard, is a wonderful chef, a good friend of Dave's and a very nice guy. 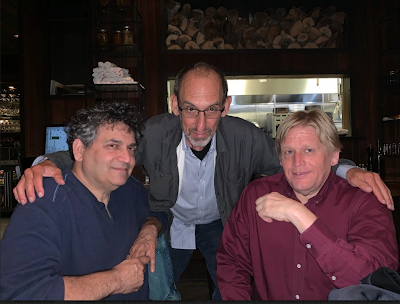 It was good to see Jeff, everybody reminisced about past debauchery and collective experiences and had a good time. Jeff graciously picked up the check.

Next morning I hightailed it down the highway. Bill had mentioned that he had seen some bald eagles on the Pacheco Pass last week and gave me general coordinates to find them.

I stopped at Casa de Fruta first to pick up some dried fruit and my favorite habanero chile flavored pistachios. Snapped a few peacocks in the parking lot.

I was happily cracking and eating the very spicy nuts as I traveled west and espied the lake a few miles up and behold, there was an eagle, just as promised. Third year male, I think. Hot diggity! 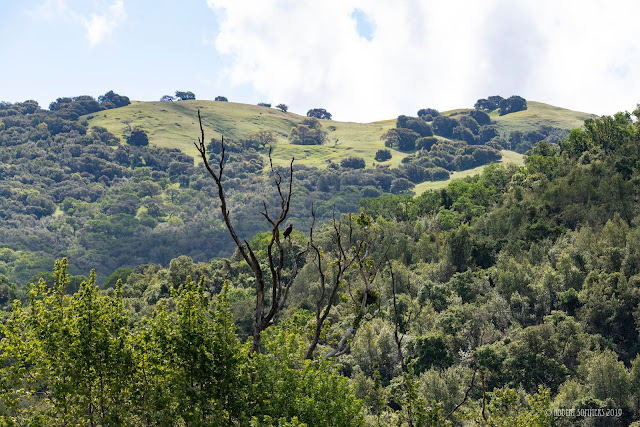 I pulled the camera with my long travel lens out of the car and snapped a couple shots, the semi trucks whizzing by me at high speed and putting me in some small fear for my life. By the way, I don't take my heavy, expensive lens on trips like this. 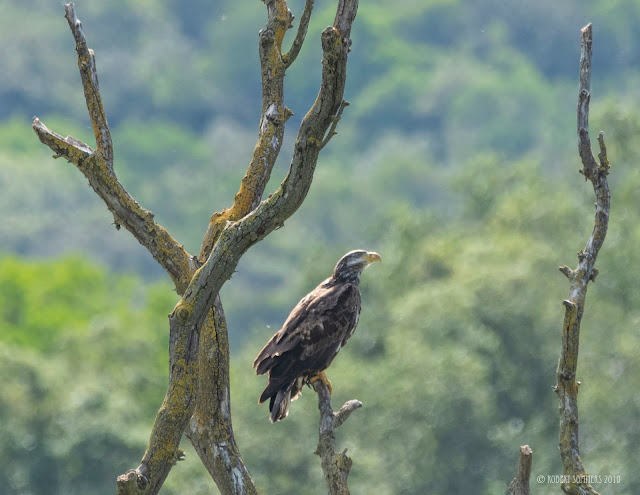 The raptor was pretty far away and it was hard to tell if I was dealing with a bald or a golden eagle.

Didn't really have the camera set up optimally either, the trucks freaking me out a little bit.

Then I did the really stupid thing.

I wiped my eye, not realizing my finger was covered in incredibly potent chili powder. The tears came instantly.

I pulled out the gallon water jug and wet a paper towel that luckily I had in my pocket and dabbed my eye but couldn't really see for a few minutes, stumbling along blindly on the narrow shoulder. 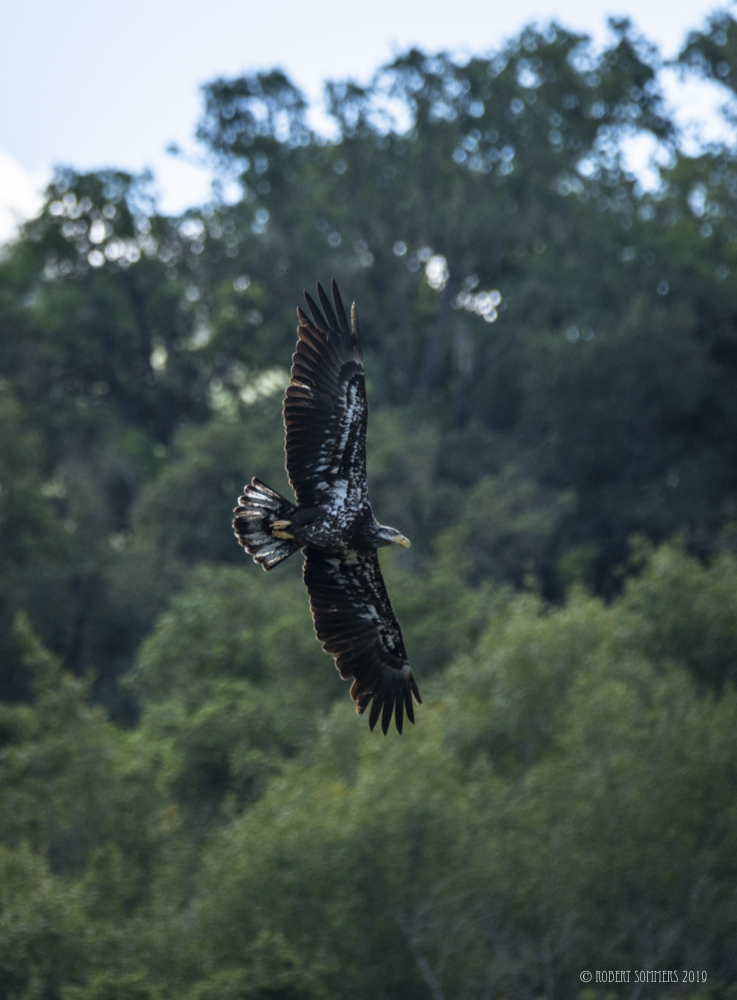 Pain was pretty excruciating. I wouldn't recommend trying it. Take my word for it. The average habanero Scoville heat level is 200,000 units. By comparison, the jalapeno's average Scoville level is 4000 units.

Eagle flew and in my slightly incapacitated state I didn't change the shutter speed fast enough.

It eventually landed on another perch and I grabbed a few shots and well, you get the basic idea. 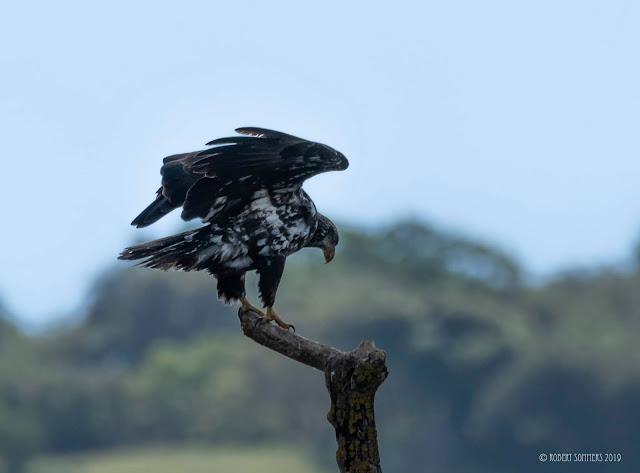 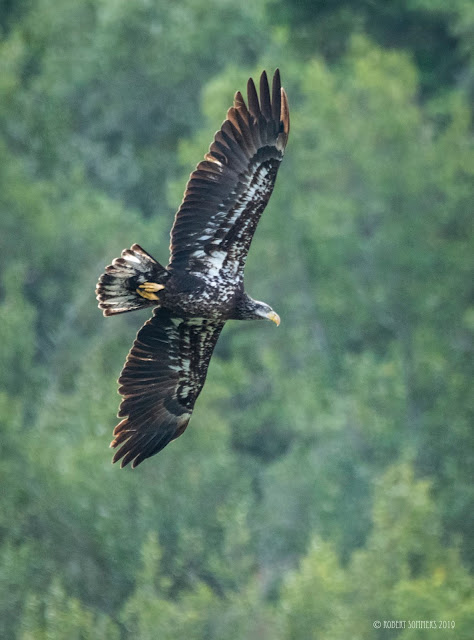 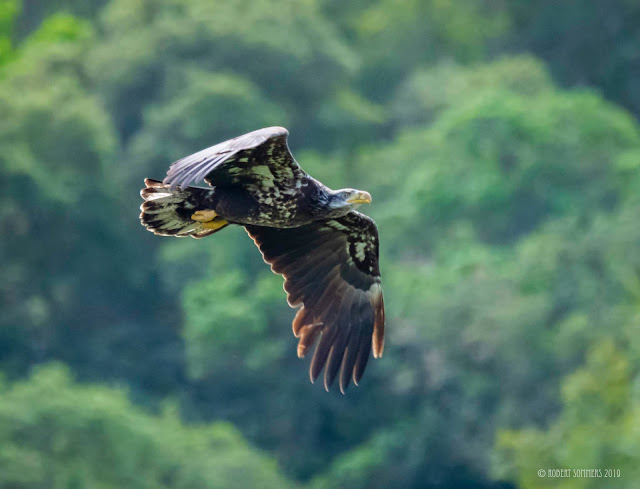 I always enjoy experiencing these beautiful creatures, that tend to live in gorgeous places and make me feel better about the planet. Will try to do a better job next time out. Maybe bring the fast lens. No more chili covered pistachios!
Posted by Blue Heron at 10:11 AM