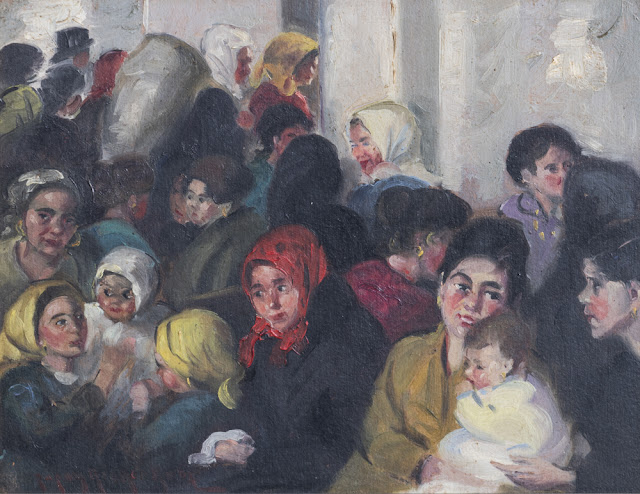 I am selling an amazing work by Susan Ricker Knox. It is a scene of Ellis Island painted in 1921, the ninth painting of a thirty two painting exhibition that hung in the United States Capital that year.

It is titled The lonely refugee. The subtitle on the back is Czechs, Italians and Jews coming to America. Lots of labels, extensive provenance.

There was an anti immigrant hysteria in America around that time. Sound familiar? This artist from Bar Harbor, Maine obviously felt their plight. My mother's family came the following year from Moldova, the terrible Kishinev pogrom a horrible memory. I appreciate the help of the artist in illustrating their arrival.

I think that this is a significant painting, although it is not very expensive. Its message is powerful. Do you notice that it is titled refugee singular instead of refugees? Our eyes go to the forlorn woman in the red babushka. What is she fleeing? What has she seen?

Anyhow the reason I bring the painting up is that a man came up to the show and said he really liked it. Have known he and his wife for decades but they only talk, never buy. So he sent his wife over and she considered it for a moment and then shared that the refugees just weren't quite happy enough. And I had to bite my fucking lip not to say something very unpleasant. And I didn't.

*
Was talking about history repeating itself at the show, like is happening with immigration and somebody said something that I really like but I will be damned if I remember who she was... But she said something very clearly - History doesn't repeat itself but it often rhymes. I like that.

*
Rick gave me something to ponder at one of our dinners, not sure if it is true. He said that in his experiences, people that smoke pot think that they are always right. Debatable. Rick doesn't smoke, I do occasionally. Do I think I am always right? No, just about 97% of the time.

*
Funny thing at the show, I watched Persian people buying shiny objects like mad from the blingy booth across from me at Hillsborough and couldn't help but think of magpies. Wish I had a taste for that stuff but I don't. What was Polonius always going around saying? To thine own self be true. What a curse that can be. Would gladly sell my soul to the highest bidder, I can't even get a shitty offer. 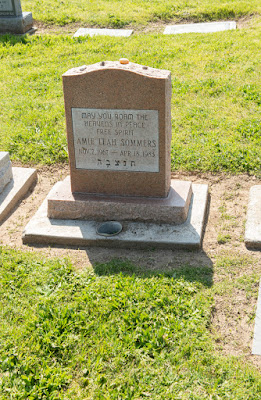 Hard to believe that my sister would be fifty two if she was alive today. She died on this very day in 1983, not even sixteen. Ten years and one day younger than me.

Must have been in the back of my mind today.

Happy birthday Baby. I love you Robert, I just wish we had more time to spend together so I could work my magic to see you smile brother.