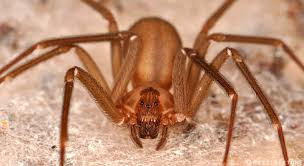 I got bit by a spider while out in the field last week. It felt like a sticker in my thigh but I couldn't see anything, thought it was odd. I didn't look down at the spot on my leg for another day or so and sort of freaked out when I finally did.

I was sporting a huge red welt and there was a strange hardness to the skin. Hurt like hell. I put various ointments and antibiotics on the bite, took an antihistamine but it kept getting worse and worse.

Yesterday the redness was about a six inch long by four inch ellipse and I started getting worried. I lanced it and saw that there was a serious infection brewing. I started looking at various bites and I am pretty sure that I was bitten by a brown recluse, one of the nastiest arachnids in North America.

I looked at a bunch of pictures of their bites and they matched perfectly. The problem is that after a week or so, necrosis sometimes sets in and tissue starts dying. Gets real ugly. This morning there was a dark spot in the middle of the bite and I was starting to get scared. They say when it starts going blue or purple you have to get to a doctor.

Leslie applied tea tree oil, which is used against gangrene, and I went to see my doctor tonight. His nurse practitioner has had a lot of experience with brown recluse bites when she worked at Kaiser, she confirmed the culprit.

I refrained from getting a tetanus shot, which is recommended, but did get an oral antibiotic which will hopefully do the trick and also guards against staph.

*
I had to laugh tonight when I heard the girl working at CVS tell a coworker that she "didn't have a photogenic memory."

I was reading a column in the Huffington Post the other day, written by one Sam Levine, a University of Chicago graduate, no less. It was riddled with spelling and syntactic errors. I sent a corrected version over and asked them if they still had an editor? An hour later it was mysteriously corrected but I didn't even get a thank you.

Of course you see this sort of thing every day on the internet. Spelling and syntax are so twentieth century.
Posted by Blue Heron at 9:05 PM

The Western Black Widow (Latrodectus hesperus)
The Desert Recluse (Loxosceles deserta)
The Chilean Recluse (Loxosceles laeta)
Black Widow bites are somewhat common in the California, since this spider often lives in close proximity to humans. Although threatening to humans, death from a Black Widow bite is rare nowadays, thanks to the development of anti-venom. Pain and discomfort is most likely to be the worst result of a bite, and often there may be little to no effect.

Recluse bites tend to be rarer in California, since the desert recluse, as implied by its name, resides in areas largely uninhabited by humans, and the Chilean recluse is only present in a few limited areas of Southern California. The most common species of recluse spider in the United States, the brown recluse, cannot be found in California.

Left a comment on NYTimes, the present day 'Daily Worker' and/or 'Pravda', and some
Einstein left a reply that my choice of verbiage wasn't up to snuff, but of course he
was dead wrong. Not only are they now illiterate, but glory in it.