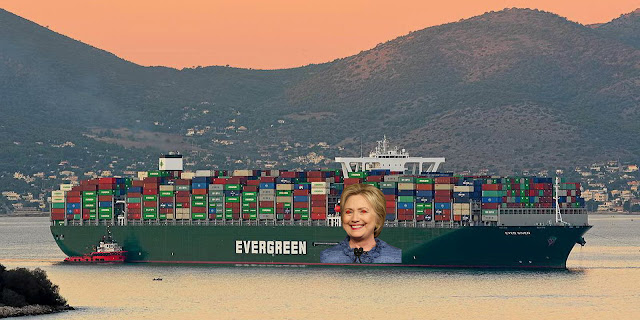 From the batshit crazy department.  An article at Newsweek. Not content to destroy our nation's children at the pizza parlors Agent Hillary has now taken to the high seas to ply her evil perfidy.

Followers of the QAnon conspiracy theory trying to find meaning behind the blocking of the Suez Canal by a cargo ship claim that the vessel is being used by Hillary Clinton for child sex trafficking.

Some supporters of the radical movement are suggesting the 400-meter-long Ever Given currently stuck in Egypt is being used to abuse children on behalf of the cabal of pedophiles that they believe runs the U.S.

Others claim the children held captive on the ship will be revealed to the world live on camera, justifying their beliefs.

In order to jump to this wild conclusion, QAnon supporters point to the vessel's operator, a Taiwan-based shipping company called Evergreen Marine Corporation. Clinton was given the Secret Service codename "Evergreen" when her husband Bill Clinton was president.

Gee, sounds plausible to me. Agent Evergreen must be stopped at all costs.

Finally something that makes sense, I hear Teddy Roosevelt was there playing leap frog with Geronimo

Humans need improving. There's a glitch in the system somewhere and it needs to be fixed.

Teddy was playing with Geronimo, but it wasn't leapfrog.